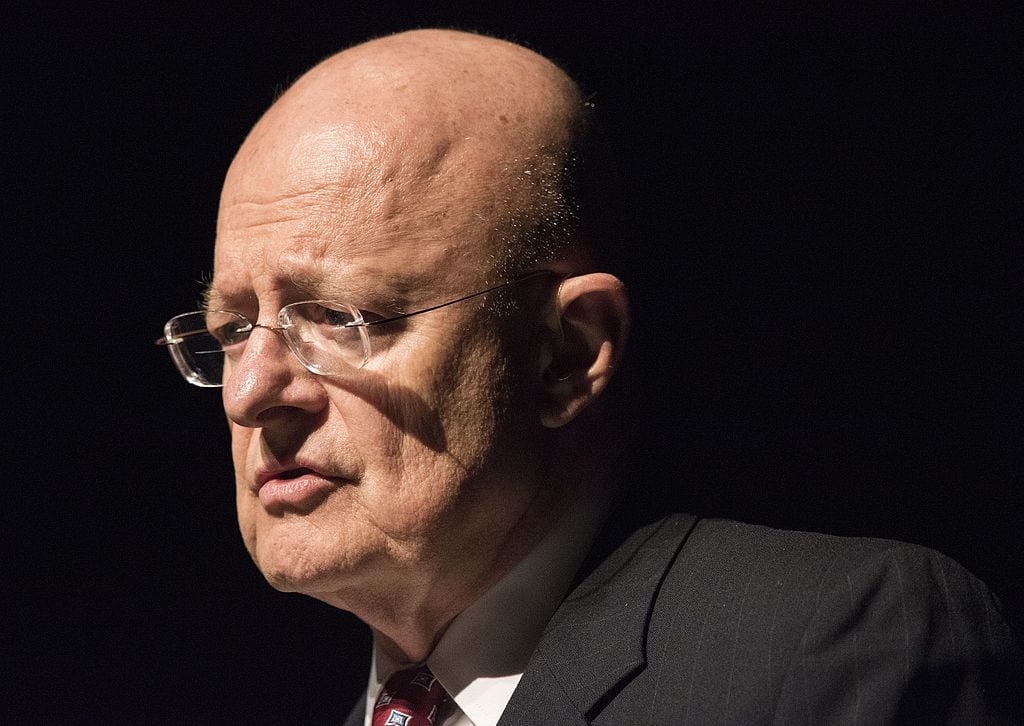 Bret Baier, in his April interview with Jim Comey on Fox News, asked him if he had seen John Brennan and Jim Clapper together since his firing. “No, no,” Comey replied at first, then said, “Actually, I had dinner with the two of them together with our spouses.” Baier asked him if they discussed “Trump cases” on the triple date. “No, we did not,” he answered.

Add that to Comey’s voluminous record of whoppers. The idea that the three stooges of Spygate, whose red-hot antipathy for Trump is nothing if not all-consuming, went out to dinner without discussing the investigation of him strains all credulity. No doubt one of their anxieties at the dinner was: When will the American public find out about the spy we sent to infiltrate the Trump campaign’s ranks?

Beneath all of their flailing attacks on Congressman Devin Nunes lay the fear that his oversight would kick loose scandalous nuggets buried within their probe: a FISA warrant cribbed from Hillary’s campaign smears, national security letters based on insanely thin justifications, an embarrassing reliance on sketchy foreign intelligence (which consisted largely of Russian disinformation and re-circulated nonsense from Hillary’s hired gun, Christopher Steele), and an infiltration plot involving a swampy old CIA asset.

The three stooges have yet to utter the name of Stefan Halper, the spy at the center of the Obama administration’s farcical plot. Rubbing his bald pate as usual, Clapper claimed total ignorance of Halper. He apparently was at the children’s table at Brennan’s interagency gatherings. “I didn’t know about this informant,” Clapper said.

Of course, his I-know-nothing routine didn’t stop him from serving as an authority on the knowledge levels of others: “No one in the White House knew. Certainly the president didn’t know.” But amidst all this defensiveness, Clapper worked up a sweat defending the spying as a “good thing,” which raises the obvious question: If it was all so normal and praiseworthy, why not tell Obama?

So what did Obama know and when did he know it? Brennan could give the precise date; he was personally briefing Obama on “Russian interference,” Brennan’s euphemism for his paranoid hunch that Putin’s agents had recruited Trump campaign officials. All the hush-hush dynamics around Brennan’s “taskforce” make no sense if he and White House officials were just sitting around discussing Facebook ads. No, what made it an “exceptionally, exceptionally sensitive issue,” in Brennan’s words, was that they were spying on an opposing party’s presidential campaign.

The doublespeak around this spying has been comically pitiful. We’re told by the three stooges and their media propagandists that Halper — who tried to get a position in the campaign, spent over a year shadowing Carter Page, and tried to entrap George Papadopoulos — “wasn’t spying.” Halper was just “observing,” “assisting an FBI investigation” (as the Washington Post desperately put it), or, in the words of John Brennan, seeking “insight.”

George Orwell would have laughed at that one. “Political language,” Orwell said, “is designed to make lies sound truthful and murder respectable, and to give an appearance of solidity to pure wind.” In this case, it is an all-hands-on-deck propaganda effort to make spying on political opponents respectable — a ruination of reputations, careers, and bank accounts of Trump campaign officials undertaken “for their own good,” we’re told. Liberalism claims a monopoly on everything, particularly language, and liberals will let us know when we can and can’t use “spying” to describe obtaining information secretly.

Once a story starts cutting against the Democrats, reporters drop it. But if that becomes impossible, as in the case of Spygate, the next best thing they figure is to saturate the airwaves with semantic quibbles and hope the public abandons the story out of sheer confusion. And if that doesn’t work, if the unwashed want to keep watching the game, they just steadily move the goal posts back — they say Trump hasn’t “proven” the undesirable story or they give one of his tweets a literalist tsk-tsking, as if the seriousness of the story hangs exclusively on the precision of his tweets. It is hilarious to watch the “clarifications” of CNN, which always amount to distinctions without a difference, presented in the most ludicrously solemn tones by the likes of Jim Sciutto, who apparently went to anchorman school after his stint as an Obama political appointee. Halper, he intones gravely, was not a spy but a “confidential human source.”

If you are one of the three stooges, you preface such denials of reality with a ponderous platitude, such as “facts matter.” That was Comey’s tack in a tweet, before launching into one of his rank-pulling, jargony descriptions of FBI investigations, which was aimed at concealing the facts. The flimflammery of it all was reminiscent of Comey sending his aides out to deny Trump’s tweets about intercepted communications at Trump Tower while FISA warrants that allowed the FBI to reach into Trump Tower sat on Comey’s desk.

“As best as I can tell,” Comey said to Conan O’Brien in reference to Halper, “it is made up. I don’t know where [Trump] is getting that from.” He was getting it from Comey’s old subordinates, who had no choice but to confirm the infiltration attempt, albeit on their own self-serving terms, before Nunes uncovered it.

“I don’t do weasel moves,” Comey claims he said to Trump during their now-infamous private dinner. On their triple date, the three stooges and their spouses must have gotten a good chuckle out of that one. Weasel moves are the only ones they have got.