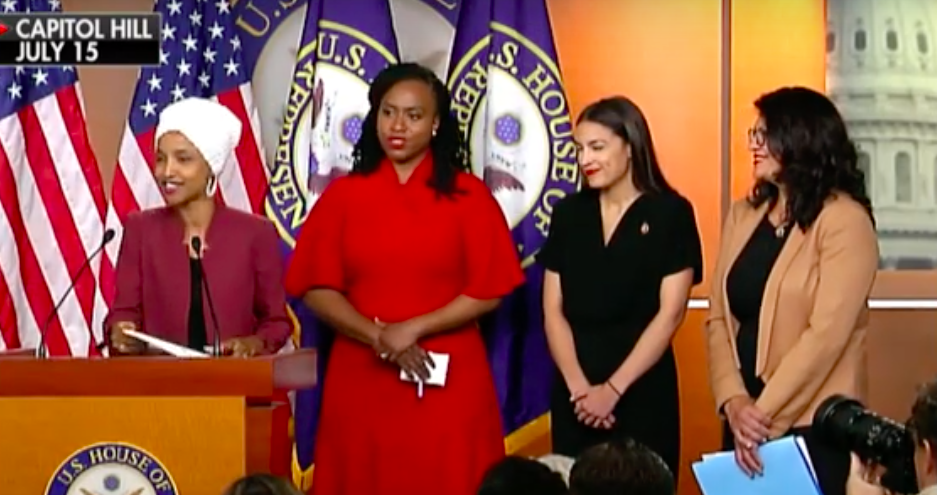 The “Squad,” as they are now called, is interested not in legislation but in political theater. And in this they have been very successful.

After their recent face-off with President Trump, they have received more media attention than the whole crew of Democratic presidential candidates.

This Democratic Party is no longer about the working class, the forgotten Americans, national security, and the counter to America’s enemies. This is not the party of Harry Truman, John F. Kennedy, Lyndon Johnson, and Henry “Scoop” Jackson.

Can you imagine any Democrat today uttering these words: “Every time that we try to lift a problem from our own shoulders, and shift that problem to the hands of the government, to the same extent we are sacrificing the liberties of our people”?

That quotation is from John F. Kennedy, and today it would be anathema. In the world of the Squad and a gaggle of presidential candidates fighting with each other as to who can give away the most government goodies to the masses, those sentiments are an echo from a Democratic Party that no longer exists.

This is now a party made up of people who will stand in the spotlight to walk an economic migrant across the border but will ignore the homeless sleeping on American streets and American children who must compete for a place in a homeless shelter to get through the night.

This is a party that says no one is above the law, except when the law is applied to illegal immigrants.

This is a party that is for gun control but voted down a measure that called for attempted gun purchases by illegal immigrants to be reported to law enforcement.

Truman was the first head of state to recognize the state of Israel. Kennedy was the first to supply anti-aircraft missiles that were critical to Israel’s security.

Today, the Democrats are as likely to support the Palestinians as they are to support Israel. The Squad’s anti-Semitic tropes are just the visible extreme, but poll after poll show a growing and dramatic split between Democrats and Republicans on support for Israel.

Fresh from her dustup with President Trump, Ilhan Omar states dramatically that she has no regrets about her flurry of anti-Semitic statements because they were not intended to be anti-Semitic. She has now moved on to use her position in Congress to unveil an anti-Semitic piece of legislation, a bill to support Boycott, Divestment, and Sanctions (BDS) against Israel.

The bill will not pass. But as political theater, it will be showcased on the mainstream media and be used as a platform to further the Squad’s anti-Semitic screeds.

The Democratic Party is obsessed with racism or at least the theatrics of accusing its opponents of racism. Not only has Donald Trump been on the receiving end of these accusations, but just a few years earlier so too were Mitt Romney and Paul Ryan. Chris Mathews implied that Romney was a racist for the mere act of running against a black president. Paul Ryan was called a racist because in budgetary discussions, he associated poverty with the inner city, which, of course, it is in most American cities.

Facts don’t matter. Vile accusations do, even when unfounded. Obama made similar statements, but as a “person of color” he was immunized from the charge.

Telling someone to love it or leave it has nothing to do with race. It has to do with whether you love this country or not. And if not, you should follow your hatred and leave for halcyon shores where every woman walks around in a tent and is subjected to the Sharia law you extol.

Omar’s flippant characterization of 9/11 as something some folks did diminished the tragedy and turned Muslims into victims. After the horrific Islamist attack on a Kenyan mall in September 2013, Omar blamed not the terrorists, but America.

Omar’s refusal to condemn Al-Qaeda and her ties to the Muslim Brotherhood underscore her true loyalties.

The Squad hates this country; their only political motivation is to destroy it. The color of their skin is only important because they choose to hide behind it and make it an issue.

As the Democrats stand with the Squad, they stand against America. Their words might appeal to the Democratic base, but to those who love this country, their words grate on the sensitivities of what we are, not just as a country but also as a civilization.