At Large Benjamin Netanyahu,Iran,Israel,Judaism,Knesset The Return of Bibi Netanyahu - The American Spectator | USA News and Politics
Menu
At Large
The Return of Bibi Netanyahu
His governing coalition will likely be the most religious and the most right-wing in the history of the Jewish state.
by Josh Hammer
Benjamin Netanyahu signs the Abraham Accords, Washington, D.C., Sept. 15, 2020 (noamgalai/Shutterstock) 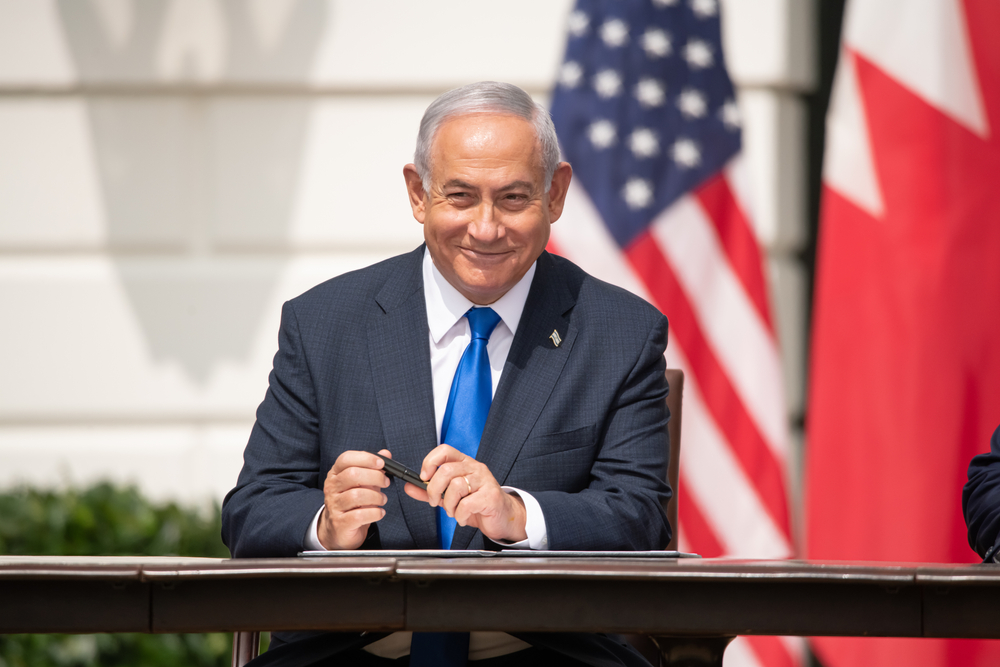 It turns out that, sometimes, the fifth time is a charm. With the final ballots now counted in Israel’s fifth national election in four years, the results are officially in: Benjamin “Bibi” Netanyahu, already the longest-serving prime minister in the 74-year history of the modern Jewish state, is set to return as premier. After four elections of decisively mixed results, where both the Right — which has been addled by its disgruntled “Never Netanyahu” camp — and the Left have consistently failed to secure a durable governing coalition, the Israeli people have finally spoken up loud and clear: Bring Bibi back.

What’s more, the final results are actually far clearer than many had expected. Some pre-election polls had Netanyahu’s Likud and its allied parties polling highly enough to secure a bare 61-seat coalition majority — Israel’s Knesset, or national legislature, has 120 seats — but others did not. In the final count, the Likud-centric rightist coalition will attain 64 seats. That may sound like a narrow winning margin, but compared to the previous four indecisive elections going back to 2019, that is a monumental victory, at least comparatively speaking.

Netanyahu’s 64-seat coalition, once formalized by President Isaac Herzog, will include 32 seats from Likud and 14 seats from Religious Zionism, a unity ticket headed by right-wingers Bezalel Smotrich and Itamar Ben-Gvir (the controversial newest star of the Israeli political scene). Netanyahu had deliberately snubbed campaign appearances with Ben-Gvir, who is typically derided by his detractors and a supine press as a “Kahanist,” but Religious Zionism ended up securing the third-most votes of any Israeli political party — behind only Likud and outgoing Prime Minister Yair Lapid’s center-left Yesh Atid. It is difficult to smear the third-highest-polling party in Israel’s frenzied multiparty parliamentary system as being replete with “bigots” or “Kahanists.” Indeed, all signs point toward Religious Zionism being a meaningful new player on the Israeli political scene; it is here to stay.

There is no one Israelis trust more to handle the Iran portfolio than Netanyahu.

Remarkably, as Likud secured a durable majority and as Religious Zionism cruised to a third-place result, the Israeli Left’s now-decadeslong collapse was only further exacerbated. Labor, which dominated the first three decades of Israeli history, will have a minuscule four seats in the next Knesset. Far-left Meretz, moreover, did not even qualify for Knesset representation. The upshot is that this next governing coalition, and by extension the next Knesset, will likely be the most religious and the most right-wing in the history of the Jewish state. (READ MORE: Benjamin Netanyahu Appears Set for Dramatic Comeback)

The relevant question, then, is: Why did Israel finally vote so decisively this time around, and why did it elect such a right-wing coalition?

In Israel, just as in the U.S., the Right typically tends to perform better when the public votes on issues pertaining to the economy and, above everything else, crime, public safety, and national security. Israel has generally been in a shakier place, from a public safety perspective, ever since the Jewish state’s last full-scale battle with Gaza-based Hamas in May 2021. There have been a number of terrorist attacks and shootings, not merely in Judea and Samaria but even in the liberal/secular heart of Israel, Tel Aviv, that have shocked the national conscience. Israeli–Arab violence, and even the occasional vandalism of synagogues, has at times escalated in mixed Jewish/Arab cities. The Israel Defense Forces has also been forced to step up its counterterrorism operations to thwart the now-ascendant jihad waged by the “Lions’ Den” militant group, which is based in Nablus.

At the same time, the Islamic Republic of Iran, which is still dealing with the domestic fallout of its state-sponsored murder of protester Mahsa Amini, inches ever closer to the bomb. Iran poses a significant threat to the West and to the U.S., but it poses an existential threat to Israel. In fact, it is, at this time, Israel’s only true existential threat. And there is no one Israelis trust more to handle the Iran portfolio than Netanyahu, who gave a tremendous speech to the U.S. Congress in March 2015 excoriating the then-ongoing Iran nuclear deal negotiations, oversaw the daredevil Mossad operation to expose and airlift out Iran’s nuclear secrets a few years later, and helped achieve the 2020 Abraham Accords peace with the U.A.E., Bahrain, and Morocco, which is best understood as an anti-Iran regional containment coalition.

Put simply, Israelis finally sobered up and realized that Netanyahu is the best candidate to steward the Jewish state on issues pertaining to law and order, public safety, national security, and even Israel’s international diplomacy. Israelis should be applauded for this decision. The so-called international community will undoubtedly blanch at the inclusion of Smotrich and Ben-Gvir in Netanyahu’s governing coalition, but, frankly: Who the hell cares? The Israeli people, and only the Israeli people, can deem what is best for them and their country. The Biden administration, and other Western actors, should respect their judgment.