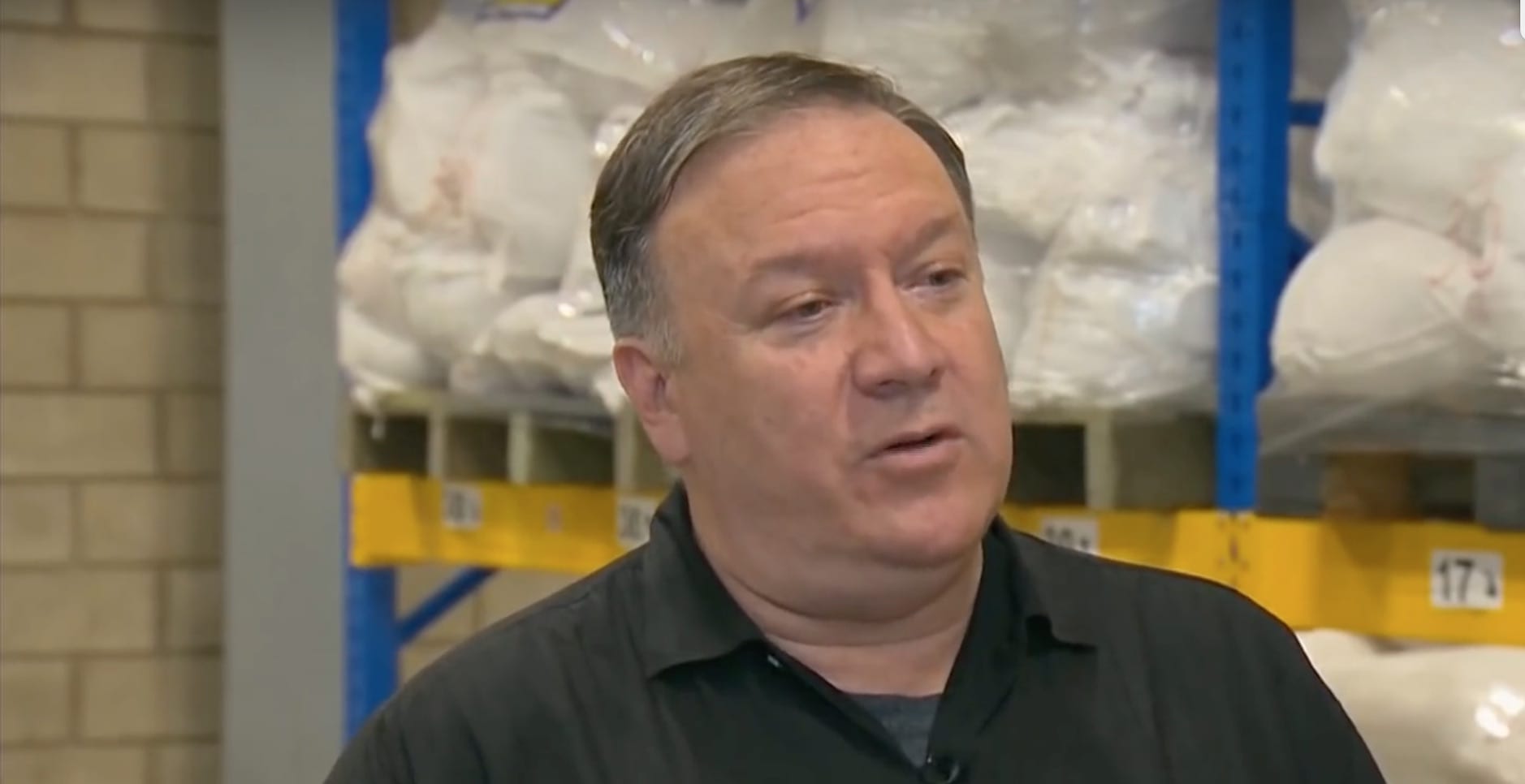 Secretary of State Mike Pompeo traveled to Colombia to strike a Reaganesque pose when he called on Venezuelan President Nicolas Maduro to open a bridge to allow entry of humanitarian aid. The effort fell flat.

The bridge didn’t offer much of a backdrop, certainly not one comparable to the Berlin Wall, where President Ronald Reagan memorably urged Soviet leader Mikhail Gorbachev to “Tear down this wall.” Moreover, Maduro didn’t pay the slightest notice to Pompeo. In contrast, Gorbachev almost certainly took note of Reagan. After all, the former had begun dismantling the totalitarian system’s worst oppressions. Indeed, in the end Gorbachev essentially did as asked by simply announcing that the Red Army would remain in its barracks, leaving East Germany’s leaders on their own.

The biggest difference, however, is that Reagan made a demand that was plausible and grew out of their growing relationship. Ronald Reagan’s determination and optimism together helped create an international environment that invited the USSR’s collapse. But Mikhail Gorbachev also was a critical player. Reagan rightly judged that his Moscow counterpart just might be the man to lower the most brutal symbol of the Evil Empire.

In contrast, Pompeo doesn’t talk to Maduro. The American secretary of state doesn’t even consider Maduro to be president any longer. The latter is simply expected to concede defeat and quit. Yet Maduro has no inclination to surrender. He is no humanitarian, and cares not at all about his nation’s continuing implosion. And where would he go? Enjoy poverty with his fellow dictators in Cuba?

Most important, Maduro seems to be winning. Since the administration recognized the National Assembly’s Juan Guaido as president, Pompeo, and the administration that he serves, have offered mostly words. But there isn’t much else to do. Military action was never a good option. War always should be a last resort, limited to protecting vital interests, most obviously where America is under attack. Venezuela, however, is a tragedy, not a serious security interest. Sanctions are effective only in making the already poor worse off. Those in power do best avoiding the worst effects. Trying to save the nation by destroying its economy and society is a dubious venture anywhere. In Venezuela it appears to be ineffective as well.

Yet sanctions appear to be the administration’s policy de jure, irrespective of impact. Two years ago the president reversed much of President Barack Obama’s opening to Cuba. He demanded that Cuba implement democracy and liberty, worthwhile objectives to be sure, but ones no self-respecting communist government would allow.

More recently he imposed new penalties to punish Havana for doing what it has been doing for years, supporting the Chavez and then Maduro dictatorships. Since in better days Caracas helped keep the Castro regime afloat, the latter is unlikely to apologize and bring its enforcers home from Venezuela. Indeed, Cuban communism survived far worse — nearly six decades of U.S. embargo and more, supplemented by the devastating loss of Soviet subsidies when the Evil Empire collapsed. New controls will only empower hardliners who criticized even Raoul Castro’s modest economic opening.

Certainly Cubans don’t see tougher U.S. sanctions as any answer. I visited in November 2017 and found widespread frustration among entrepreneurs who were trying to break free of the Castroite dictatorship. Many had invested in expectation of more American tourists. Even then the private economy was estimated to provide about 40 percent of the island’s jobs. The availability of better-paying private jobs — at one restaurant an anesthesiologist was washing dishes — created social discord and posed a political threat, touching off fierce debates within the regime about how to control private business. The administration’s increased sanctions make the job of hardline commies easier. The penalties are doing nothing to free the Cuban people.

Despite the claim that President Trump was a Putin puppet, the administration has been tougher on Russia than was President Barack Obama. Although some of the increased sanctions were passed in what was presumed to be a veto-proof congressional vote, the administration has added additional penalties. Moreover, the president is talking about imposing even more sanctions in response to Russian support for Venezuela’s Maduro government.

Yet so far they have proved to be utterly ineffective. Of course, sanctions hurt Russia, or more accurately, Russians. The narrower restrictions — on travel to the West, for instance — may even target the right people but are least likely to have any political impact. Maybe an oligarch unable to visit London will get mad at Vladimir Putin, but will he or she join the opposition? That would be a quick way to become a former oligarch. The broader penalties do more to hurt average folks but do not increase the regime’s willingness to regurgitate Crimea or abandon Ukrainian separatists in the Donbass. Nor is Moscow likely to pull its bodyguards, weapons trainers, and everyone else out of Venezuela.

In fact, the increasing economic problems facing Putin & Co. make it harder to concede failure elsewhere. What, other than defeat in a catastrophic war, would induce Putin to return Crimea to Ukraine? What, other than perhaps a pledge not to bring Kiev into NATO, would cause him to leave Russian separatists to their fate? And as long Washington “meddles” in Georgia and Ukraine, why shouldn’t Moscow “meddle” in Venezuela and Cuba?

The Trump administration also appears to be relying on sanctions to force North Korea to make an impossible and impossibly speedy deal to denuclearize. They have hurt the Democratic People’s Republic of Korea, but it is one thing to encourage Pyongyang to head to the negotiating table. It is quite another to convince a man who makes Don Corleone look like a wimp to disarm. Most Korea watchers view the possibility of full denuclearization as little above zero.

Yet after making his own decision to negotiate with the North’s Supreme Leader Kim Jong-un, the president appears to have adopted John Bolton’s “Libya option,” demanding that Pyongyang surrender all its nukes and hope for the best. Of course, that’s what Muammar Gaddafi did. And it resulted in him being pulled from a drain pipe and butchered a few years later. No doubt Kim has watched the YouTube snuff video (you can too!). Someone who at the tender age of 26 took over the family regime and successfully survived viper-infested North Korean politics, eliminating all of his rivals, many permanently, is not likely to hand over his leverage to Washington and trust in its benevolence.

If the objective is simply to impoverish the DPRK, then sanctions can work. But a poor, hostile, isolated, paranoid regime with nuclear weapons is no foreign policy success. Unlike his father and grandfather, Kim appears to desire economic reform and diplomatic involvement. There may be intermediate nuclear deals — freeze on testing, cap on production, and more — that might be struck, advancing stability and peace. Maybe not, but the alternative is a nuclear North Korea under permanent sanctions, whose effectiveness depends on Chinese enforcement, or, far worse, war.

Ironically, while the president was satisfied with a one-page denuclearization commitment from North Korea last year, he considered the 159-page agreement with Iran to be a ludicrous sell-out. His response, naturally, was to reimpose sanctions, despite Europe’s refusal to go along. Since then he’s added new economic penalties, apparently expecting the Islamist regime to crack, the Persian Thomas Jefferson and John Adams to emerge, and democracy to flower. Of course, none of these things have happened.

The Iranian regime is awful, of course, though objectively not as bad as America’s Saudi ally. The Kingdom of Saudi Arabia more brutally represses its own people, invades more neighboring countries, kidnaps more foreign prime ministers, supports more brutal dictatorships, and more generously funds Islamic radicalism around the world. Although claiming to fear that Iran might revive its nuclear weapons program, the administration is promoting the sale of nuclear technology to Riyadh, as if Crown Prince Mohammed “Bonesaw” bin Salman can be trusted.

Sanctions have put Tehran under economic pressure and reduced its discretionary income, but so far U.S. policy has only strengthened hardline factions, which still have found the resources necessary to intervene in Syria and Venezuela. And even those Iranians inclined to deal with Washington cannot agree to the administration’s demand for everything the U.S. got before, plus conventional disarmament and de facto acceptance of Saudi hegemony in the Gulf. (Frankly, the latter would be bad for America as well as Iran.)

In short, the administration’s policy of hyper-sanctions seems doomed to fail. Overusing economic penalties also is counterproductive. European Union officials were quick to point out that European firms sued by American companies under the administration’s new rules can file countersuits in Europe. Moreover, European creation of a financial vehicle to shield transactions with Iran from U.S. scrutiny is an ominous development. Whether this particular effort is successful matters less than the fact that Europeans, Chinese, and Russians now are united by a desire to prevent America from using its financial power to coerce them. New and more effective alternatives seem inevitable. Every new overreach likely advances the end of Washington’s ability to impose its economic will.

Sanctions can be a useful foreign policy tool. But economic warfare is no panacea. Indeed, so far the administration’s reliance on economic penalties has been a bust. They have proliferated without having any visible impact on the conduct of Cuba, Iran, North Korea, Russia, or Venezuela. Administration officials appear to be fulfilling the classic definition of insanity — doing the same thing while expecting a different outcome. The president needs to take control of his foreign policy and emphasize results over politics.