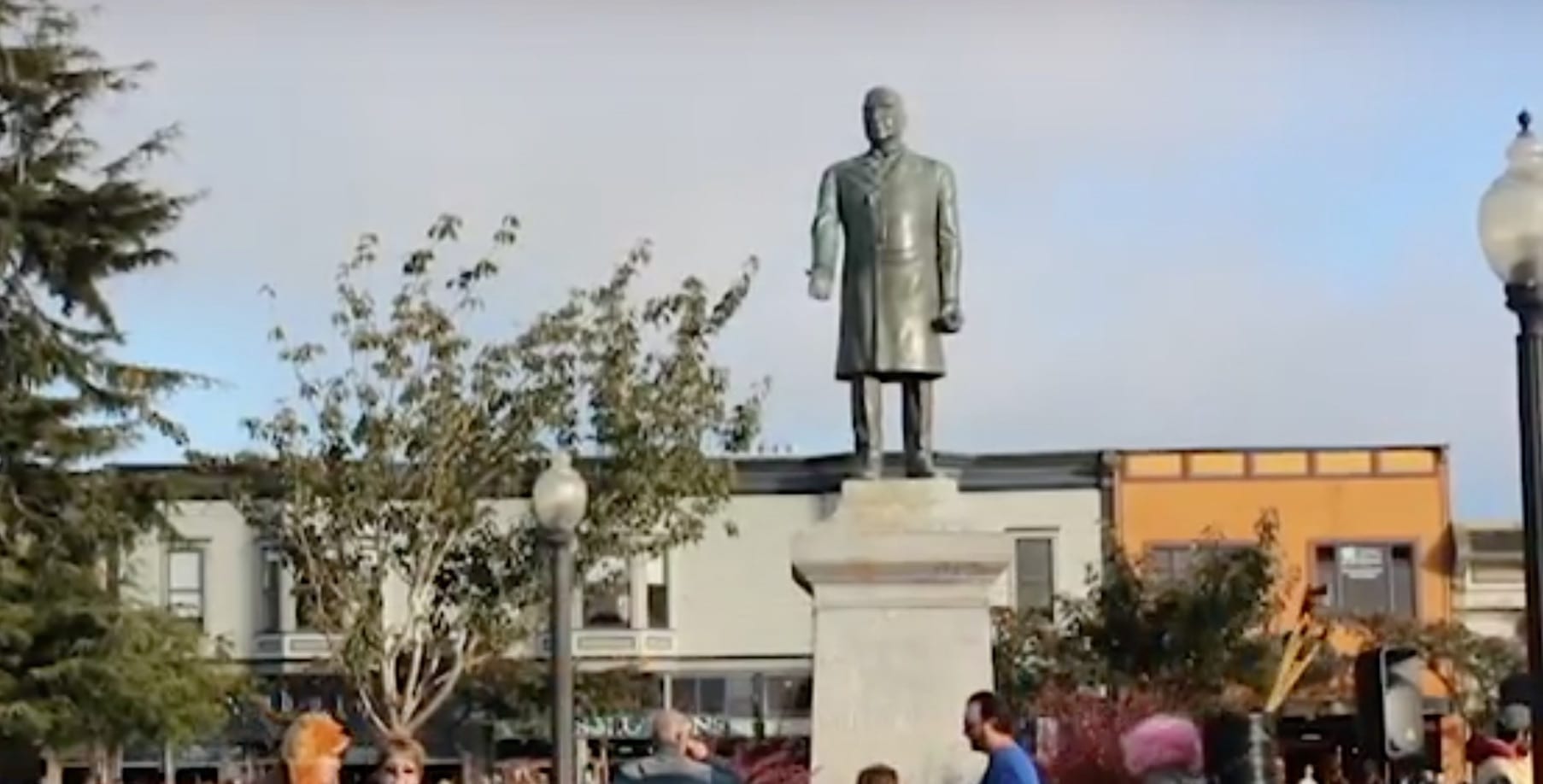 One key to understanding much of the bewildering behavior we see around us is to recognize the power and popularity of “virtue signaling.” Keeping virtue signaling in mind will help you understand a lot of behavior that otherwise makes no sense.

What, for example, is the point of removing Confederate statues or attempting to disown the country’s Founding Fathers because some were slave owners? It makes sense if your objective is to be sanctimonious. You make yourself feel better by looking down your nose at Thomas Jefferson.

Virtue signaling is the modern version of what St. Augustine in the 5th century referred to as “outward signs of inward grace.” A major difference, however, is the kind of grace he referred to actually meant something.

A precondition to needing to virtue signal is guilt. Virtue signaling is one of the left’s package deals that typically involve two steps. Firstly, make people who have done nothing wrong feel guilty. Then, offer them ways to assuage that guilt. It’s little more than a con game but it has worked amazingly well for liberals.

An irony is that the need to virtue signal is an insecurity about your own virtue. An observation a psychologist friend likes to make is, “The bigger the front, the bigger the back.” Or as Ralph Waldo Emerson observed, “The louder he spoke of his honor, the faster we counted our spoons.” Virtue signaling is motivated more by insecurities than virtue.

The “signaling” part of virtue signaling means you want others to become aware of your virtue. Why is that important to you? Where does your need to signal come from? Are you so overwhelmingly virtuous that you can’t resist letting others know about it?

Virtue signaling is, of course, closely related to political correctness. Being sensitive to PC and being quick to take offense demonstrates your virtue for all to see.

Recycling is one of the left’s favorite sacraments. It helps overcome the guilt of consuming.

There is an opportunity cost to virtue signaling. Spending time on useless activities, e.g. recycling, marching, allows avoidance of useful, meaningful activities, e.g. being thoughtful and considerate of those around you, e.g. family, friends, and people you work with. Those behaviors can actually make a difference.

Maybe you’ve wondered why actors and other celebrities feel the need to publicly express their political opinions. What is their motivation? Maybe they feel guilty about how amazingly wealthy they are (they shouldn’t).

Donald Trump is the context for much of the virtue signaling we observe. It’s another two-step process. The first step is to decide that Donald Trump is a reprehensible human being. He is crude, unsophisticated, and his personality makes you cringe. The second step is making it crystal clear that you and he are polar opposites. You have absolutely nothing in common with him. You don’t need to provide details about what makes you virtuous, just the fact that you despise him is sufficient to prove you’re virtuous. He is crude, you are refined. Trump provides a backdrop for your identity. It’s ironic that hate is seen as a path to virtue.

Virtue signaling is a substitute for thinking, it is thinking avoidance. It is the latest variation of group think. When you latch on to group opinions you have no need to think for yourself.

Driving a Prius automobile is a popular form of virtue signaling. Driving a hybrid lets others see that you care about the planet and that you’re doing your part to prevent it from being destroyed by CO2. Driving a Prius allows to you drive rudely and carelessly. Cutting someone off or running a stop sign or two are trivial matters compared to saving the planet. Everything’s relative. It’s probably no accident that Priuses have an unusual profile. That helps assure that your virtue signal will noticed.

A favorite demand of leftists on college campuses and endowment fund boards of directors is “divestment.” What is divestment? In the investment portfolios of endowment funds and retirement portfolios are stocks of companies involved in shunned activities such as producing and selling fossil fuels. In such situations activists demand that the colleges or foundations divest, i.e. sell, any stock of such despicable companies.

Divestment is possibly the most useless behavior anyone could ever imagine. How anyone thinks it will have any impact on anything real is a mystery. Because of the way capital markets work, divesting on anything but a massive scale will have no long-term impact on a company’s share price. If they manage to drive a stock’s price down, bargain hunters will drive it back up to its underlying value, relative to other stocks. Other than stoking sanctimony divestment accomplishes absolutely nothing.

Showing your disapproval of the names or mascots of sports teams demonstrates your sensitivity for the supposed feelings of various minority groups. How many of those demanding that the Washington Redskins change their name are Indians? My guess is that it’s a very small fraction.

Wearing ribbons is a popular form of virtue signaling. The ostensible purpose is to “raise awareness” for such things as breast cancer (pink ribbons). Is there anyone who isn’t already” aware” of breast cancer? And once your awareness has been raised, what are you supposed to do with it? As is the case with every variation of virtue signaling, the mission statement is nowhere to be found.

Virtue signalers are delicate creatures who are easily offended. They wouldn’t be caught dead laughing at stereotypical humor. They are overly serious about almost everything. It only hurts when they laugh.

Marching and demonstrating are two popular virtue signaling activities. The next big opportunity will be June 9. It is the “March for Oceans,” or what they’re labeling “M4O.” According the organizers’ website, “This summer we will see a new blue wave of resistance — and celebration — for the other 71 percent of our environment that is the Ocean. The ocean is rising and so are we!”

Uselessness and remoteness are two of the ingredients for virtue signaling choices. Driving a hybrid automobile will make not an iota’s difference to “climate change” (whatever that is). In any case, the “climate disruption catastrophe,” as it’s sometimes called, is not predicted to occur for another fifty years. It was more than two hundred years ago when some of our founding fathers owned slaves. The past is unchangeable and irretrievable. Problems that you can’t do a damned thing about are virtue signaling favorites.

A recent Dennis Prager column, “Three Reasons the Left Wants Evermore Immigrants,” had as reason number three, “the power of feeling good about oneself. It would be difficult to overstate the significance of feeling good about oneself as a primary factor in why people adopt left-wing policies.… In their eyes, they are moral heroes protecting the stranger, the oppressed, the marginalized, the destitute.”

Finally, this just in: The Arcata, California city council voted Wednesday night to remove the statue of President William McKinley from the town square. The statue has been in place for over a hundred years. As per usual, McKinley’s sins have not been clearly elucidated. He was assassinated in 1901. Like Matt Lauer, the statue will vanish into the ether. One of the groups demanding the statue’s removal is the Humboldt State University student group, Movimiento Estudiantil Chicanco de Aztlan, whatever that means. I’m embarrassed to admit I’m a resident of Arcata. Our neighboring town to the north is McKinleyville. The town’s name is probably not long for this world.

These are just a sampling of the ways virtue signaling is dictating behavior far and wide. Being aware of its many manifestations will reduce your confusion and increase your amusement. It’s a shame it’s doing so much damage.