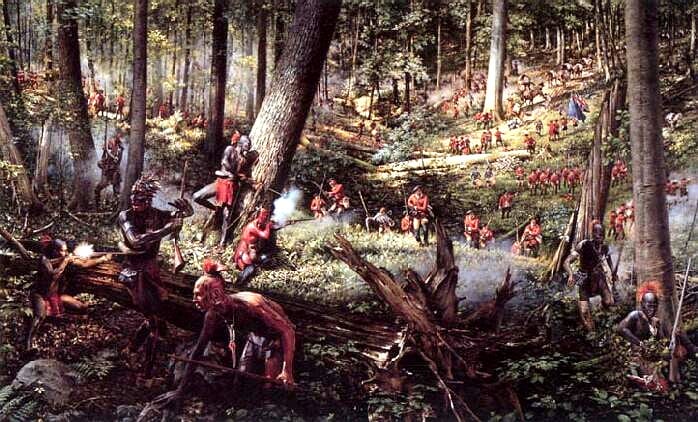 In the 1660s, the French colonies in present-day Canada were struggling to thrive, despite King Louis XIV having sent thousands of colonists to populate New France — at the crown’s expense. Of course, it probably didn’t help matters that the crown sent most of the French colonists to live in New France as indentured servants (thereby effectively replicating the bifurcated society that dominated France, only in a new land with poorly established infrastructure). The colonists who arrived existed as indentured servants for a period of time and then were expected to become docile peasants — serfs — in New France. As Colin Woodward explains, “two-thirds of male servants returned to France” after their indentured servitude was over, citing “rough conditions, conflict with the Iroquois, and the shortage of French brides.”

Many of the remaining French colonists moved into the wilderness and went “native.”

So bereft of hope in the New World were these French colonists that they opted to abandon the colonies of New France and instead chose to live as “noble savages” in the vast wilds of North America. These (former) French colonists survived off the land; sold furs and timber to Native American traders — they even married the daughters of powerful Native American chieftains, in order to better their social position in their new homeland. It wasn’t just former French indentured servants fleeing into the woods to embrace the lifestyle of the “noble savage,” either. Many upper-class French colonists abandoned New France for the woods of North America.

[The French colonists]… spend their lives in the woods, where there are no priests to restrain them, nor fathers, nor governors to control them […] I do not know how to describe to you the attraction that all the young men feel for the life of the savage, which is to do nothing, to be utterly free of constraint, to follow all the customs of the savages, and to place oneself beyond the possibility of correction.

Governor Denonville wrote that of his fellow French colonists who abandoned the French way of life in New France for that of the Native Americans in 1685. Yet, Denonville’s words could just as easily apply to the modern Westerner as much as it did to the early French colonists in the New World. Today, we Westerners are listless — particularly the males of our societies. While the European Westerners experience this in far starker terms, their American counterparts are experiencing this listlessness nonetheless.

However, unlike yesteryear’s “noble savage” who could charge headlong into the great woods of North America and survive — even flourish — for years, the “noble savage” in the postmodern, Western world is more akin to a child left alone on a crowded street corner. We are lost and uncertain of our future. That uncertainty has imbued a considerable amount of fear and anxiety, which has translated into self-destructive nihilism.

One of the few commonalities that the postmodern savages of the West have with the premodern noble savages is that both groups lived only for the present. Yes, some of the former French colonists married into Native American society, creating families (and therefore a future for themselves), but how many didn’t? How many remained in the woods, living only for themselves? This is similar to what the postmodern savages of the West do today. Rather than leaving a decaying colony behind, as the French colonists of yore did, many — particularly young men — today flee into the virtual world of video games, pornography, and the internet, where their every immediate desire is satisfied. Just as in the colonies of New France, there are still those of us who live and work as previous generations did — trying to save, to pay down bills, start families, build community, etc. But, today, there are a staggering number of people who have simply given up and run into their virtual forests.

Ours is paradoxical lifestyle in the West. We want — and need — freedom to live. In the United States, liberty is one of the three most basic principles enshrined in our society (along with life and the pursuit of happiness). Yet, today, we too often confuse liberty with libertinism; we conflate individualism with isolation. And, for many, this has a corrosive effect on society. We all need our privacy, and we all need a small venue of escape. However, the postmodern savage takes these concepts to the extreme.

Man is by nature a social animal; an individual who is unsocial naturally and not accidentally is either beneath our notice or more than human. Society is something that precedes the individual. Anyone who either cannot lead the common life or is so self-sufficient as not to need to, and therefore does not partake of society, is either a beast or a god.

And, I can assure you that the postmodern savage is not a god (nor is he god-fearing, which is a large part of the problem). As Denonville observed of the “noble savage” fleeing the colonies of New France, today’s Man is “beyond the possibility of correction.” We have removed all previous restrictions imposed upon humans — citing these strictures as signs of oppression of some form or another.

What do we have to show for it?

Westerners (both individuals and their countries) live in a staggering amount of debt. Fewer and fewer children are being born, leading to a vicious cycle of declining prosperity. Most are infantilized (so-called “experts” argue that adulthood does not begin until the age of 24 for most Westerners today). Today’s Westerners suffer from a disproportionate level of depression, anxiety, obesity, and other neuroses. More marriages end in divorce than ever before. Abortion is far too prevalent. Meanwhile, our governments grow increasingly corrupt while fewer people partake in the democratic process — allowing for greater amounts of capture by special interests and incompetent and/or corrupt politicians and bureaucrats.

Just like the French colonies of the New World in the 17th century, the Western countries today remain functional. However, their full potential is being sapped by the inefficient socio-political dynamics of modern Western politics. This, in turn, is draining the West of vast amounts of potential and shoving very promising individuals in dark, isolated corners. As the West remains mostly functional but declining, like the colonies of New France, it weakens the West… allowing for a more assertive power to rise and displace the West. The French position in North America was ultimately permanently removed by the British Empire during the Seven Years’ War. All of New France fell under British control until the British Empire de-colonized after the Second World War. With the West in decline and countries like China apparently ascendant, who will replace the West as the dominant culture on the planet?

Going forward, Western societies must strive to do that which previous generations excelled at: creating — and strengthening — the links that forge society together; at the local, state, and ultimately federal level.

Making America — and Western civilization — great again will only happen if we can rebuild our communities; focus on nation-building at home; and reinvigorating our civil life. That will take time and concerted effort of the kind that most in the West are no longer capable of giving. If we cannot undertake this generational, civilization-wide revitalization campaign, then the West will truly be in terminal decline, and a new dark age may blanket the Western world for several generations.

Postmodern society in the West has created a new generation of savages, who are far from noble or worthy of emulation.