In Search of Wisdom Churchill,Donald Trump,FDR,Humor,Ronald Reagan The Politics of Joy: A Seasonal Reminder - The American Spectator | USA News and Politics
Menu
In Search of Wisdom
The Politics of Joy: A Seasonal Reminder
Playfulness and joyfulness are the great disarmer of fear and uncertainty — as our greatest leaders well understood.
by Shmuel Klatzkin
Ronald Reagan and Walter Mondale in their second debate, in Kansas City, MO, Oct. 21, 1984 (Wikimedia Commons) 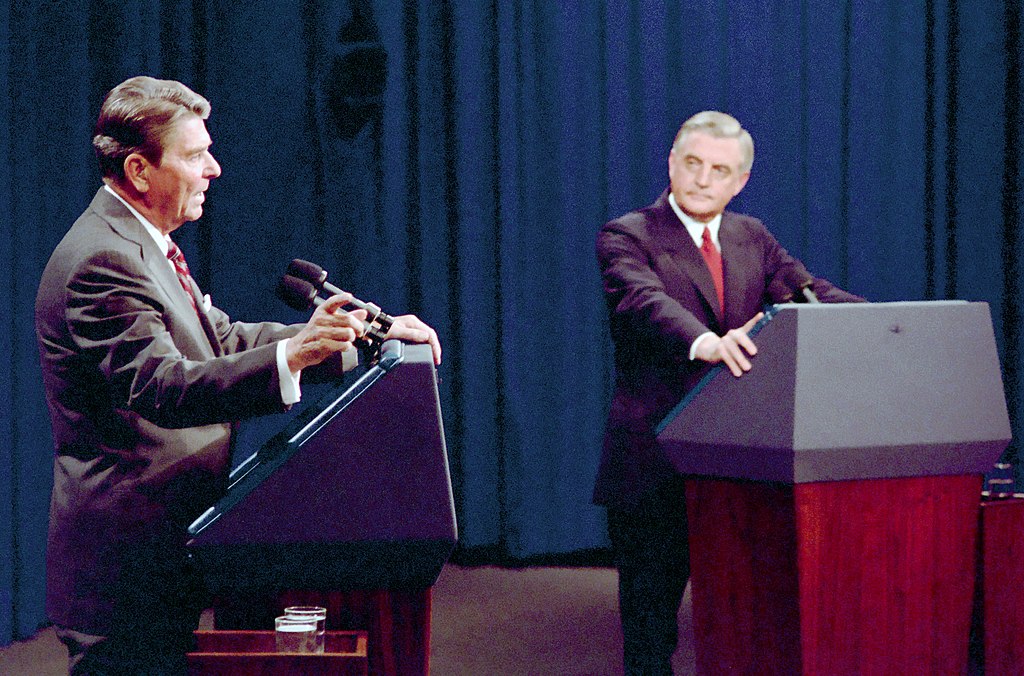 FDR knew how to deliver a laugh line. The president was dying by the time of the 1944 presidential campaign, but he summoned up the energy he needed not only to run a campaign, but to infuse it with humor.

He spoke of the Republican opposition who were

… not content with attacks on me, on my wife, or on my sons. No, not content with that, they now include my little dog, Fala. Well, I don’t resent attacks, and my family doesn’t resent attacks, but Fala does resent them. You know, Fala is a Scotch, and being a Scottie, as soon as he learned [that a story had been made up that he had been left behind in Alaska and that a destroyer had been dispatched to retrieve him] at a cost to taxpayers of two or three, or eight or twenty million dollars — his Scotch soul was furious. He has not been the same dog since I am accustomed to hearing malicious falsehoods about myself … but I think I have a right to resent, to object, to libelous statements about my dog.

The audience, clapped, cheered, and guffawed. FDR was reelected; the laughter was more powerful than the suspicion of ill health. He passed away less than seven months after the “little dog Fala” talk.

More people may remember the 1984 debate between Ronald Reagan and Walter Mondale, when Reagan was asked to respond to worries raised by Democrats that he was too old and tired for the strains of the presidency.

Reagan responded by denying that he was unequal to the task. With a determined look, he added:

I will not make age an issue of this campaign. I am not going to exploit for political purposes my opponent’s youth and inexperience.

To his eternal credit, Mondale was the first to laugh, a sustained and obviously sincere reaction, a beat or two ahead of the audience, who followed in kind. Reagan was reelected in a true landslide.

Many of the greatest leaders of free nations had extraordinary senses of humor. Lincoln was famous for his constant humorous storytelling, which served his purposes well, disarming and charming the all-too -serious people who are drawn to the halls of power seeking their main chance.

Churchill’s wit was renowned. He used it against his political opponents, but he even found powerful humor in the darkest days of the war. Speaking to Canada’s Parliament in early 1942, he described how France’s defeated generals told their prime minister that, “in three weeks, England would have her neck wring like a chicken.”

Like a skilled standup artist, he held a long pause to just the right moment, looked sidewise and exclaimed: “Some chicken!”

The members roared with laughter that gradually turned into vigorous applause. Churchill waited until the applause subsided a bit, then continued at a slightly lower pitch, looking up puckishly: “Some neck!”

The playfulness of these great leaders in the midst of their trying challenges was not a childish lapse into irresponsibility. Humor and playfulness when sincere inspire courage. People fear terribly to fail by being overcome by fear, by betraying themselves. Humor and playfulness disarm the ego’s fears. Laughter discharges the tension. With the laughter and relief comes confidence, with confidence comes new energy in our spirits and in our ability to pay the kind of attention necessary to the task we face. Humor and playfulness disarm the fear that the enemy tries to instill, whether in politics or in war. In the hand of a master, is a powerful tool. One tries hard to imagine a dictator being playful, save in a sadistic way in which the laughter is merely a tool of cruelty.

In Trump’s best moments, he was funny and playful. When humorless Hillary, backed by an equally grim bureaucracy, successfully hid and destroyed evidence of her terrible mismanagement of the Benghazi debacle and for having illegally stored sensitive government digital documents on an eminently hackable private server, Trump’s calling out to Russia to send what they had was hilarious and pointed. Even better was the utterly humorless response, of those Democrats, who, like apparatchiks, seemed unable to comprehend irony, and began their shrill cries of treason, which have not stopped. (They still don’t get the irony.)

Much of Trump’s political decline has gone hand in hand with the lessening of his humor and playfulness. The total focus on the issue of the 2020 election has not been leavened with either humor or playfulness, lending it the feeling of an obsession rather than a noble cause. Captain Ahab was neither funny nor playful.

The Bible values joy more than it is given credit. In the midst of the most serious warnings against breaking faith with the covenant, and emphasizing the often-terrible consequences, Deuteronomy proclaims that all this comes “because you did not serve God with joy and good-heartedness.” The clear implication, as commentators note, is that mere machine-like compliance cannot compare to a warm-hearted commitment that is serious about joy.

I was with Him as a confidant, a source of delight every day, rejoicing before Him at all times, rejoicing in His settled world, finding delight with mankind.

This is no dour stoicism, but wisdom’s own message that joy and playfulness are meant by divine design to pervade the world. The message is even clearer in the original Hebrew text where the word translated here as “rejoicing” is the same word used for “play.”

We know on the most intimate level that play and joyfulness are necessary. Parents have complete responsibility for their infants and little children, yet it is clearly necessary to be able to play with them to bring them into a relation with the world. Through play, children learn to negotiate and relate. Through the play’s being joyous, children are motivated on their own to continue and deepen their play.

Good education is built on this methodology. The Jewish tradition pioneered universal schooling for children. It also continues to emphasize that “a person should always study that for which their heart has a desire.” This leads a person past learning in order to comply (half-heartedly) with others’ requirements to a life-long pursuit of wisdom and truth.

A source from about 1700 years ago tells of a rabbi who headed an advanced academy and was a major figure in shaping the law and teaching it. Despite the lofty position he held, he would begin each teaching session with light words in good humor. Once the students had gotten into the playful spirit, their minds would be alive to the topic of their study.

Take the time to enjoy this season with family and friends in a spirit of joy and playfulness. It opens up hearts and minds to hear things in better spirit. It unlocks possibilities of regaining a vision of a nation once again showing that unity is possible even when freedom allows people to be as diverse as their minds and temperaments.

Playfulness, you must remember, is serious work. Light and joy to all.