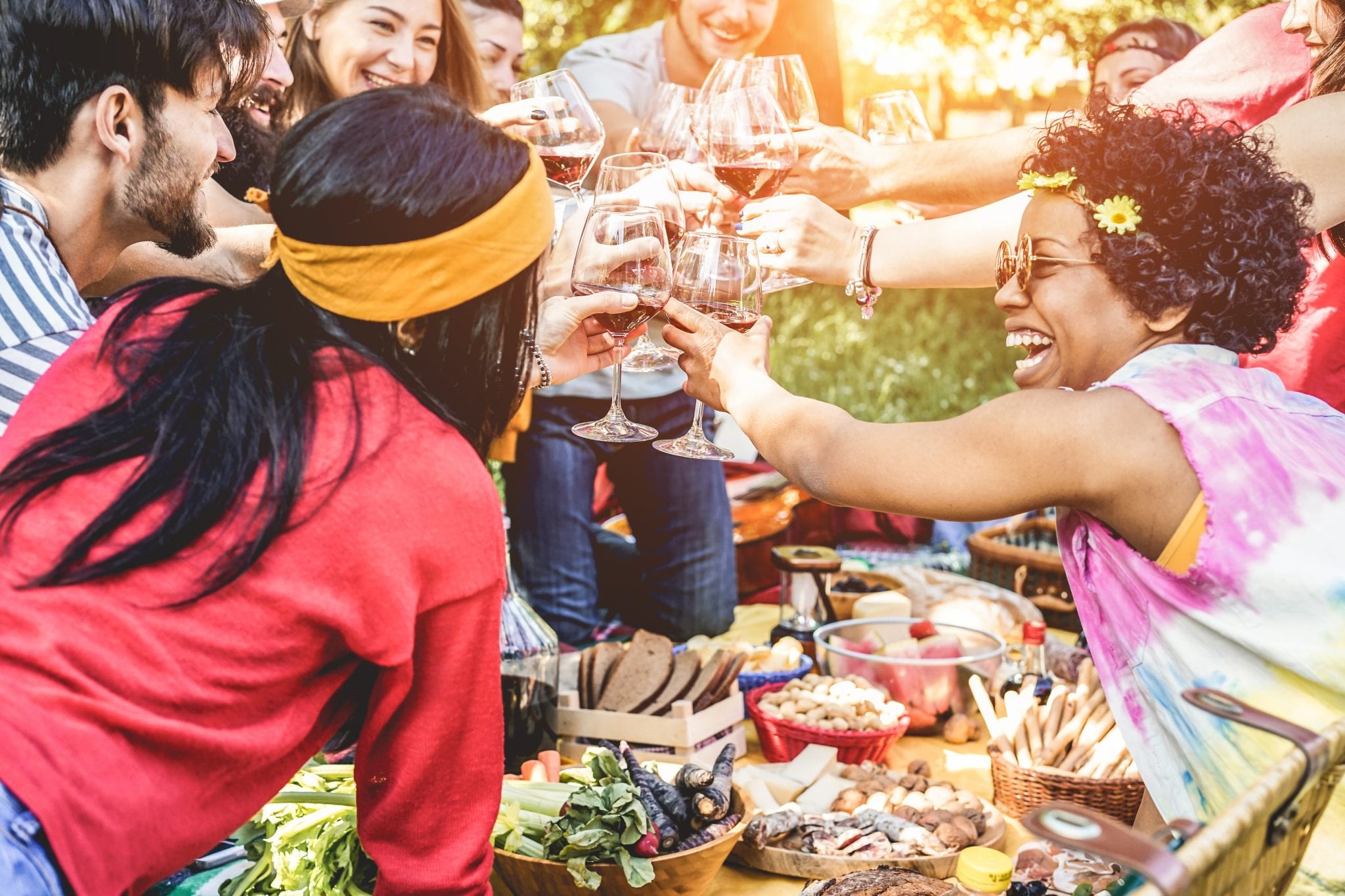 This past weekend, I attended a wine club pick-up party — those customer appreciation events where wine enthusiasts collect their latest shipment and vintners express how much they value their most ardent patrons. These gatherings are often held in tasting rooms or on the vineyard grounds themselves and typically include appetizers, music, and pleasant conversation.

This one was situated in a clearing at the end of a winding dirt road lined by tidy fields of tangled vines. It could have been any vineyard from Bordeaux to Tuscany, except for the colossal California oak tree that served as a canopy hovering over rows of long tables and white folding chairs.

Shortly after our arrival, an older gentleman engaged us in conversation. There were five in our group. We chatted about Catholic school, family, and trips to Ireland. But what began as a pleasant discussion on a near-perfect day soon became ill-fated and awkward. The man suddenly launched into a story about a relative who was a “staunch Republican” and declared that he had to “correct” her political beliefs. When he asked me about my “political persuasion” and discovered that I too was a Republican, he tried to “correct me” before demanding, “It’s time for you to leave.”

Now, I have not been asked to leave a place because of my political beliefs since I was tossed out of a gay bar in Los Angeles back in the 1990s — and not for the reasons you would think. I didn’t leave the wine event, at least not right away. The man then lifted his glass toward me and over me and began to tilt it. I parried his glass with my own, and after our goblets “clinked” he declared, “Oh, I wasn’t toasting you. I was trying to pour my wine on your head.”

The moment went from delightful to appalling in a nanosecond. As he stood above me framed by the knotted and gnarly branches of that magnificent tree, he looked small, angry and insignificant. I coolly replied, “Yes, and I was defending myself.” To which he retorted, “I just think your hair could use a little more red in it.”

Moments earlier he had announced that the tree dated back to the days of Christopher Columbus, and I quickly realized that he likely owned the place. Mr. “Big-Shot Vineyard Owner” then went on to declare that no one wanted to listen to my “bullshit.”

I am not sure what B.S. he was referring to, but it was a curious prelude to the “What a Great Guy I Am” speech that he made not 10 minutes later to his adoring listeners. You know, the folks who buy his wine through auto-shipment and provide the cash flow to keep the presses running and the separators churning.

As I sat under that glorious old tree, I dreamed about simpler, more civil times. I thought about the warm sun on the back of my neck and the fresh breeze that roused the drink napkins and stirred up the fall leaves. I came to the realize that I go to these things to forget about people like Mr. BSVO. To me, a glass of wine is not an ideology; it’s a collective cup of history. Under all the layers of rock and soil sits the biography of humankind — the chronicle of our origins, generations, and tribes interred within the sediment of existence. It is wine that sets us free, and like a good story, it transcends borders, time zones, and ideologies. Wine connects us and intoxicates us with the passion of human engagement.

I’m fairly certain that Mr. BSVO did not expect me to write about our little incident. He doesn’t know that I’m a writer. As a matter of fact, he knows nothing at all about me — but from his point of view, he had all the information he needed. I am actually a gay conservative, and I was at that party with my partner. He may or may not have seen her leave behind me. He may or may not care, but it likely did not fit his politically correct hit job.

I do understand that this was a private event and that Mr. BSVO has every right to toss me out for any reason. But make no mistake, free speech and civil liberties work both ways — and I have every right to call out his hypocrisy and intolerance.

When I came “out” to my mother some 25 years ago, she assured me that she loved and accepted me. But with a nervous smile and a trembling hand on my shoulder she said, “I am worried about how the world might treat you.” She’d be astonished to know that the mistreatment would come from the most curious of places — and that getting tossed out of a gay bar for being conservative back in 1996 — was only the beginning.

I am by no means embracing victimhood here. I have faced a lifetime of Mr. BSVO’s, and it has made me tough and resilient. My convictions are as strong as they’ve ever been, and my faith in fairness has not been shaken one iota. Above all, the haughty hypocrites that seem to turn up at venues like this have made me appreciate the good and genuine people of the world that much more.

Mr. BSVO’s unprovoked display of aggression was about as underwhelming to me as his polo advertising Lizard Island, the exclusive Great Barrier Reef island resort where an average room will set you back more than $1200 a night. Now, I don’t begrudge people the right to indulge in the fruits of their labor however they see fit. Just be nice about it. And if life has blessed you with extraordinarily good fortune, try to be a bit nicer.

Here’s the moral of this story: Wine has stood the test of time and been the drink of eternal kingdoms and dynasties, precisely because it has no political party. Alas, nor does bullying, intimidation, or oppression. Misguided people on both ends of the political spectrum are fully capable of doing and saying asinine things. And it is incumbent upon the rest of us to speak up and call out bad behavior whether it comes from Mr. BSVO or the poor stiff who picks grapes on his estate. The people at my table didn’t do that. I understand — drinking wine on a Saturday afternoon should be easy, not hard.

Ellen DeGeneres perhaps summed it up best after she was recently excoriated for sitting with ex-President George Bush at a Dallas Cowboys game: “When I say be kind to one another, I don’t mean only the people that think the same way that you do. I mean be kind to everyone.”

Patricia M. Mahon is a native of New York, a dual Irish and American citizen, and a 20-year resident of Los Angeles. She is a graduate of Manhattanville College in Purchase, New York (BA), and Trinity College in Dublin, Ireland (MA). She also did Ph.D. coursework at Tulane University and the University of Denver and studied at the W. B. Yeats International Summer School in Sligo, Ireland. Mahon is a novelist, dramatist, screenwriter, and poet. She has won international poetry awards and multiple screenwriting and film festival honors. Her three-act stage play The Abbey Yard was produced at The Odyssey Theatre in Los Angeles in 2000. In 2015, Mahon completed the first volume of Stories from The Age of Distraction: The Island, a protest narrative that addresses the distraction of the digital age and its impact on human communication, interrelationships, and the future of storytelling. In 2019, she completed “A Night in the Vine,” a story about perfect strangers becoming perfect storytellers with a little help from the earth, the soil, the seasons, and good wine.