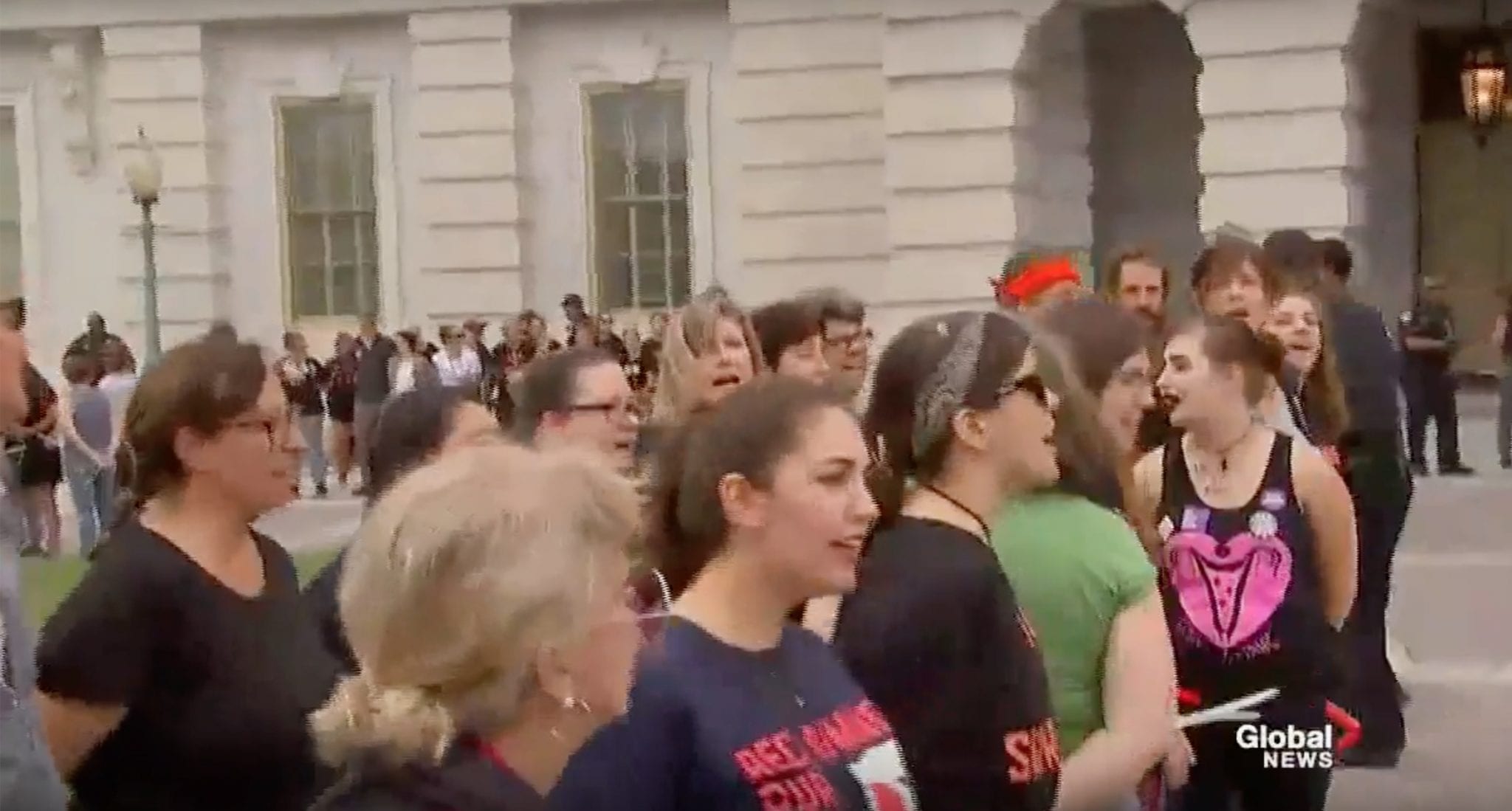 Deranged and desperate, driven mad by President Trump’s successes, Democrats disgraced themselves in defeat as their dishonest smears failed to stop Brett Kavanaugh’s confirmation as the 114th justice of the Supreme Court. As the nomination process culminated in a 50-48 Senate vote, Americans witnessed the stark insanity of howling mobs the Democrats unleashed on Capitol Hill.

The Senate vote was repeatedly interrupted by outbursts of screeching from protesters. J. Christian Adams, a former Justice Department official, was in the gallery and was disturbed by one female protester’s insane screams: “She was like a feminist automaton: ‘I will not consent, I will not consent.’ Capitol Police… dragged her out the doors and down the hallway. I have visited hospitals for the seriously mentally ill, and the shrieks from this woman were as odd and unearthly as anything I ever heard inside a mental hospital.”

Democrats own this insanity. They are responsible for the madness unleashed by the tactics with which they sought to derail the Kavanaugh nomination. It is difficult to imagine that voters in next month’s midterm elections will reward Democrats for such embarrassing behavior. Polls indicate that the fight over the Supreme Court nomination has energized Republican voters, and it seems increasingly likely the GOP will expand its Senate majority. The question now is whether Republicans can leverage their hard-fought Kavanaugh victory to help turn back the threat of a Democrat “blue wave” in the House elections.

While we must wait another four weeks to discover the electoral consequences of the Democrats’ blunder, we can already identify some of the losers in this debacle, starting with North Dakota Sen. Heidi Heitkamp. Her chances of re-election were looking bad even before the Democrat announced she would vote against the Kavanaugh nomination; as some observers remarked, Heitkamp apparently realized she can’t beat Republican challenger Kevin Cramer anyway, and her vote signals a desire to be a Cabinet member in the next Democrat presidential administration.

Another obvious loser is Michael Avenatti, whose client Julie Swetnick made the most ludicrous accusations against Kavanaugh. Previously notorious as the “Creepy Porn Lawyer” for his representation of Stefanie Clifford (a/k/a “Stormy Daniels”), Avenatti used Swetnick to promote a bizarre claim that teenage Kavanaugh was the leader of a high-school rape gang. There was exactly zero reason to believe Swetnick’s wild tale; she went to public high school in Gaithersburg and had no connection to the prep-school scene in posh Bethesda, besides which she was a couple years older than Kavanaugh and his friends, raising the question of why a college girl would have been partying with underage teenage boys. Swetnick’s lack of credibility was singled out in the Senate floor speech in which Republican Sen. Susan Collins of Maine announced she would vote to confirm Kavanaugh. “This outlandish allegation was put forth without any credible supporting evidence and simply parroted public statements of others,” Collins declared. “That such an allegation can find its way into the Supreme Court confirmation process is a stark reminder about why the presumption of innocence is so ingrained in our American consciousness.”

If Democrats needed a scapegoat for their failure to stop Kavanaugh, Avenatti would seem an ideal choice. An aide to Senate Democrats told CNN that the involvement of Avenatti “set us back, absolutely,” and one senator told the network that the Swetnick story “wasn’t helpful because the story became about Avenatti.” Yet the whole smear campaign against Kavanaugh may have been doomed from the start by Sen. Dianne Feinstein’s inexplicable decision to hold on to the accusation from Christine Blasey Ford for more than a month before going public with it. Feinstein received Ford’s letter detailing her claim on July 30, and referred Ford to the law firm of Debra Katz and Michael Bromwich, but said nothing about this grievous accusation until Sept. 13, after Kavanaugh had already sat through more than 30 hours of hearings before the Senate Judiciary Committee, on which Feinstein is the ranking Democrat member.

A timeline of the Senate’s investigation of the accusations against Kavanaugh, issued by Judiciary Committee Chairman Charles Grassley’s staff, shows that Ford, Feinstein, and Senate Democrats were uncooperative with this investigation. On Monday, Sept. 17, for example, Ford’s attorneys did not respond to multiple emails from Senate investigative staff. When the committee staff interviewed Kavanaugh that day in a conference call, Democrat staffers refused to participate in the interview. It was not until nearly 8 p.m. the next evening, after Grassley had already announced plans for a committee hearing the following Monday, that Ford’s lawyer replied to the Senate staff’s emails; that same night — Tuesday, Sept. 18 — one of Ford’s attorneys went on CNN to say her client was not ready to testify at the Sept. 24 hearing scheduled by the committee.

It was apparent that the Democrats’ tactical purpose was to use Ford’s accusation to delay Kavanaugh’s confirmation, in hopes that Republican support for him would collapse. However, Kavanaugh was determined to defend his innocence and, as I learned from a source the week after this controversy erupted, White House staffers had been told to prepare for a fight to the finish: “The Boss is not budging.” President Trump was totally committed to Kavanaugh’s nomination, and he was not going to be intimidated by the Democrats’ tactics.

Meanwhile, Senate Republicans were becoming angry at the two-faced game being played by Feinstein and the Democrats. While publicly demanding an FBI investigation of Ford’s claims, Feinstein and her staff were uncooperative with Grassley’s investigators, who interviewed or obtained statements from all the potential witnesses to the incident Ford alleged. None of these witnesses corroborated Ford’s allegations and yet, despite this lack of corroboration, Democrats and their media allies treated her as if she must be telling the truth (see “What Does ‘Credible’ Mean?” Oct. 2). There were many reasons to doubt Ford’s allegations and to be suspicious of her motives. Appearing on Fox News last week, former federal prosecutor Joe DiGenova said what few others had been willing to say: “I actually believe that Dr. Ford fabricated her testimony. I think she’s delusional.… There could be no corroboration, because nothing ever happened.”

Trump’s impromptu mockery was widely criticized, although he was only guilty of saying aloud what many skeptics had noticed about Ford’s Sept. 27 testimony before the Judiciary Committee. She was quite specific about how she was attacked and the identity of her attacker, but quite vague about the location of this incident. As was noted in a Sept. 30 report by Rachel Mitchell, the prosecutor brought in by committee Republicans to question Ford during the hearing, there were numerous inconsistencies in her story, and Ford had trouble remembering recent events related to her accusations. And the way the whole confirmation process was being turned into a carnival by Senate Democrats angered Grassley and Senate Majority Leader Mitch McConnell. Activists funded by left-wing billionaire George Soros disrupted Judiciary Committee hearings and harassed Republicans in the halls of the Capitol, while an aide to a Democratic congressman “doxed” Senate Republicans. In an Oct. 3 speech from the Senate floor, McConnell pointed an accusatory finger at the Democrats. Their tactics weren’t “about getting to the truth or giving anyone a fair hearing,” the Kentucky Republican said. Instead, this was an attempt by “the far left” to block Kavanaugh’s nomination “by any means necessary. If facts and evidence couldn’t get the job done, then intimidation tactics and bullying would have to do.”

McConnell refused to be intimidated, and many conservatives, who had long been dissatisfied with the “go-along-to-get-along” bipartisanship of the Senate GOP leader, were surprised by his sudden toughness. Equally surprising was Sen. Lindsey Graham — long derided as a “squish” by conservatives — being turned into a macho action-movie hero by the smear campaign against Kavanaugh. His angry speech at the Sept. 27 Judiciary Committee hearing, denouncing Democrats for “the most unethical sham since I’ve been in politics,” earned Graham plaudits from conservatives, and he has vowed to take his anger “to the streets” in the final weeks of the fall campaign. “I’ve never campaigned against a colleague in my life,” Graham said on Fox News Sunday. “That’s about to change.… I’m going to go throughout this country and let people in these purple states, red states where Trump won, know what I thought about this process.”

The demonization of Kavanaugh by what Arkansas Sen. Tom Cotton called an “orchestrated smear campaign” failed to stop his nomination being confirmed. It succeeded, however, in driving Democrats into a frenzy of insane desperation. Last week, a group of witches using the social-media hashtag #MagicResistance announced they would cast a “binding spell” against Kavanaugh. The dark powers evidently refused to be conjured, however, and the Democrats’ failure to stop Kavanaugh produced the scenes of shrieking women who mobbed the Capitol on Saturday. After the Senate voted to confirm Kavanaugh, the deranged horde descended on the Supreme Court building, where Daily Wire reporter Emily Zanotti witnessed their final paroxysm of impotent rage. The women “broke through a police line and barged to the Court’s chamber, where they proceeded to wail, gnash teeth, and pound at the doors while Kavanaugh was being sworn in inside.” The hysterical protesters “tried desperately to claw their way” through the heavy locked doors.

In their doomed effort to obtain power, Democrats attracted these lunatics to their cause, and they have no one to blame but themselves for their failure, as I remarked Sunday: “Once the party of the working man, Democrats have become the party of the screaming woman.”