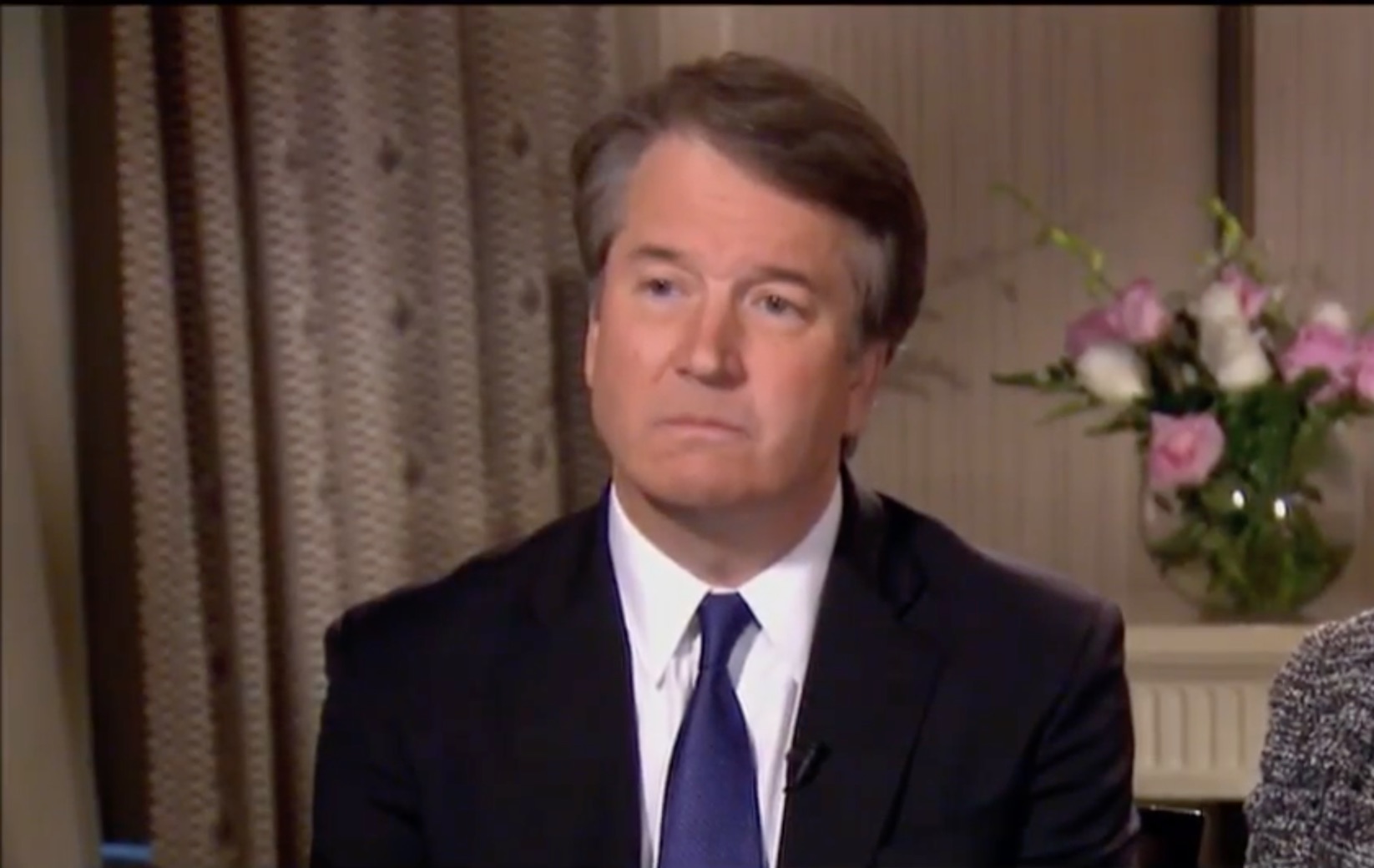 On Monday, Brett Kavanaugh, the distinguished federal appeals court judge nominated by President Trump to fill the open Supreme Court judgeship the confirmation of which has become perhaps the ugliest, most nakedly political horror show in American history, went with his wife to an interview with Fox News’ Martha McCallum.

“I will not be intimidated into withdrawing from this process,” Kavanaugh had said following a weekend in which one allegation against him, that he sexually assaulted a woman named Christine Blasey Ford, fell apart when all four of the witnesses she named to corroborate her accusations rebutted her claim. “The coordinated effort to destroy my good name will not drive me out. The vile threats against my family will not drive me out. The character assassination will not succeed.”

Kavanaugh was right, at least he should have been. But when the Ford allegations died, up came a New Yorker piece outlining another fish story, in which a woman named Deborah Ramirez alleged that Kavanaugh, as a freshman at Yale, had dropped his pants and displayed his 19-year-old manhood to her during a drunken debauch of a drinking party at the school’s dormitory. The New Yorker’s Ronan Farrow and Jane Mayer offered the story almost apologetically; after the requisite clickbait headlines and lede, it spent the second half of its text largely admitting Ramirez’ story lacked any corroboration to speak of and even went so far as to recognize that Ramirez herself wasn’t sure Kavanaugh was the expositionist in question.

Bear in mind this is a distinguished jurist who had endured no less than SIX background investigations by the FBI which uncovered none of these scurrilous allegations; if there was a pattern of sexual misbehavior by Brett Kavanaugh our premier investigative agency would surely have uncovered it. No red flags turned up — not until a bunch of partisan Democrat political operatives desperate to prevent a doctrinaire constitutionalist judge from taking Anthony Kennedy’s swing vote seat on the Supreme Court decided to pull out all the stops in pursuit of that agenda. In the face of these merciless smears Kavanaugh is forced to confess the kind of sexual truths which, in our current society, are socially disqualifying more than just embarrassing, just to discredit a characterization as a sexual predator concocted purely out of partisan political avarice.

What these people have done to Kavanaugh isn’t the usual Washington political antics — and that says much. After all, it’s still very much in the national memory what Democrats in the Senate tried to do to Clarence Thomas, and what they did to Robert Bork. In the case of Bork the Democrats, led by the serial sexual abuser Ted Kennedy, whose drunken extramarital antics included an actual body count, focused on Bork’s recognized opposition to infanticide as a primary justification for defeating his nomination — and had the numbers to do so. Lacking such numbers a few years later, the Democrats went deeper on Thomas, finding a middling university professor named Anita Hill who had worked with the judge in the federal bureaucracy to spin yarns about his supposed ribald behavior in the workplace. Thomas’s response was forceful and convincing, enough to put him on the Court and banish the Anita Hill imbroglio to partisan quarters of discussion for the next 25 years.

Which is what Kavanaugh’s Fox News interview was aimed at doing. But in the interview Kavanaugh lacked the fire of Thomas, who scalded his tormentors for the “high-tech lynching of uppity blacks” they had planned. Instead, he refuted the allegations of his sexual misdeeds by claiming he spent his high school and early college years as a virgin, a contention which was by turns believable, and tragic.

I don’t want to know Brett Kavanaugh’s sexual history. And if you do, there is something egregiously wrong with you. It’s quite obvious Kavanaugh himself is no more comfortable with the discussion of that information than any of us are, but he’s forced to bear his soul to achieve the pinnacle of his life’s work.

And this is disgusting on a scale we may never have experienced in modern American history — for which one side in our politics is responsible.

What consequences do we impose on the Democrat Party for stooping to this level? Let’s understand that this isn’t just about Brett Kavanaugh — though if it’s restricted to him the events of the past week are destructive and outrageous enough. Who will consent to running for office now? Who will stand for a federal appointment confirmable by the Senate?

Who will be willing to crawl through the mile of rancid sewer-pipe that is the American political process just to achieve a government job?

The answer is the one the Democrats want it to be. Namely, that no conservative will tolerate what Kavanaugh is fighting through. In the future, as National Review’s Andrew McCarthy said, our options will be restricted to polite progressives or the Democrats’ pet RINO’s, if not the hard-core socialists and cultural Marxists the Left would like to impose on us. There is a stark choice — either to go gently into this good night of American dissolution, or fight. Hard. Now.

And this is where this fall’s midterm elections come in.

Here is my interpretation of what’s happening, and my expectation of what’s coming in the next few days — this entire Kavanaugh business comes down to two numbers: 11 and 51.

It takes 11 members of the 21-member Senate Judiciary Committee to move the Kavanaugh nomination to the Senate floor, and there are 11 Republicans on the committee. Only one of those 11 — Arizona’s Jeff Flake, who has embraced the NeverTrump conceit as his personal approval ratings have descended to hellish levels — appears to be problematic for Kavanaugh’s nomination. And only three Republicans on the Senate floor are questionable Kavanaugh votes.

But Judiciary chairman Chuck Grassley has to insure he has Flake’s vote before he can move forward, and Senate Majority Leader Mitch McConnell has to insure he has the Flakes, Susan Collinses, and Lisa Murkowskis before he can hold a floor vote. It’s not yet time to declare the Republican establishment weak and ineffectual on the Kavanaugh confirmation; this isn’t as easy as we’d like it to be.

However, time is running out — and this is the Republicans’ Super Bowl. They sold their voters the idea that if we gave them the House, Senate, and White House, things would finally be made right from the frightening abuses of the Obama years, and we delivered. Republican voters tolerated the poor performances of Senators like Bob Corker, John McCain, Collins, and Murkowski on the assurance that where it came to judicial appointments they would be a marked positive difference from the Democrat alternatives, and in Trump’s case we were told that whether his history was that of a conservative or not, he’d clearly present America with better judges than Hillary Clinton would.

Well, so far Trump, who couldn’t run on what a demonstrated conservative he is, has been immaculate in nominating conservatives to the federal bench. And if the Republican Senate, populated by a gaggle of swamp creatures who for decades have feasted at the expense and adulation of Republican and conservative organizations, can’t confirm Kavanaugh, well…

Let’s remember that Kavanaugh, as sterling as his reputation as a jurist might be, is the very epitome of an establishment Republican. In fact, we can say that he might be the single most salutary example of an establishment Republican in Washington — someone who, on balance, Trump conservatives can appreciate alongside the old Bush guard, and even the more sober-minded liberal (note, liberal, rather than progressive, because increasingly there’s a difference which can’t be ignored) Democrats can concede is qualified for the Supreme Court. If the GOP establishment can’t see Kavanaugh’s nomination as a hill to die on, then may everlasting shame — and electoral apocalypse — fall upon their heads.

It won’t come to that, because it can’t. This week will see Kavanaugh dragged through the Senate into the Supreme Court, whether his dignity survives intact or no. And when it happens, it will be gut-check time for the Republican voter base six weeks from the 2018 midterm elections.

It’s been said, and of course it’s true, that should Kavanaugh’s nomination fail there is zero justification for Republican voters to bother showing up to head off the much-ballyhooed “blue wave” the media is so hard at work trying to gin up in November. Those voters put Trump in the White House as a signal that the corrupt Hillary Clinton-led Washington in-crowd was unacceptable, and if the soft coup signaled by the Mueller investigation hasn’t been enough to infuriate them into reprising their 2016 efforts the Kavanaugh confirmation process should certainly do the job.

Because what the current circus — complete with Sen. Ted Cruz and his wife being assaulted in a Washington restaurant over the Kavanaugh nomination — shows is that today’s Democrats will stop at nothing to achieve political power. There is no limiting principle to those people, just as there was no limiting principle to the Left’s aims in Cuba, Nicaragua, Chile, Venezuela, or Grenada. If Kavanaugh isn’t a wake-up call dictating to America that they must be rebuked at the ballot box, we don’t want to see the next iteration and what might be necessary to preserve our society against the threat it presents.

That might not even be an electoral question. It might be something we do not wish to contemplate. It’s clear, by the actions of the other side, that they’re more than willing to transcend normal politics to have power over us — and that means every single one of our votes must be counted in November.