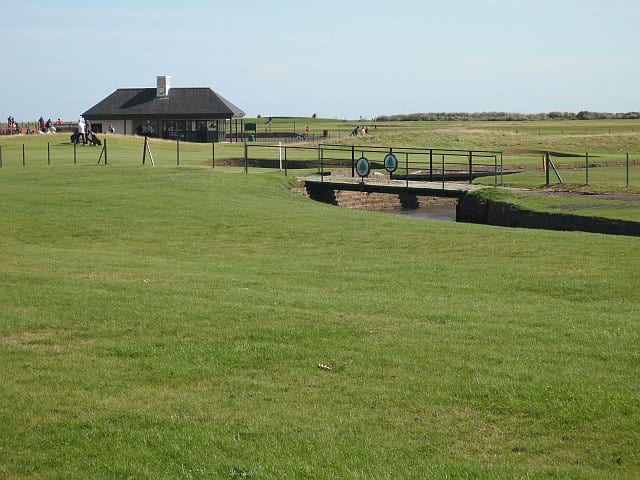 It is a tournament that appeals to an old aesthetic and a reactionary conviction that maybe golf shouldn’t be too much fun for either the spectators or the players. That the game isn’t about only towering drives followed by a wedge to the green, a putt for birdie, and winning scores that run to double digits under par. This is the power game that is modern tournament golf and in spirit, it resembles contemporary baseball which, it sometimes seems, comes down to home runs and strikeouts. and nothing much more. None of this hit-and-run, sacrifice fly, bunting to advance the runner to second stuff.

The game they will be playing for the next four days at Carnoustie in Scotland will not be kind to bombers who cannot keep it on the fairway or down out of the wind or maneuver the ball around the course in a way that avoids the pot bunkers that are just about always good for an extra stroke on the scorecard, and of course the little rivers that look more like ditches and that are called burns.

One of these became famous back in 1999. A golfer named Jean van de Velde had arrived at the 18th hole on the last day of the tournament with a three-shot lead. Double bogey and the Frenchman who nobody had ever heard of would win the Claret Jug.

For some inexplicable reason, he pulled driver. In the British Open, the prudent thing is often to keep the big dog on the leash. Keep the ball low, out of the wind, and in the fairway. Let it roll on the fairways’ hard surfaces. Tiger Woods won one of these things in 2006, on another course, and hit driver only once all week. His two irons off the tees were not those high, arching things of beauty that so often carried him to glory back in the U.S. But his “stingers’ kept him on the fairways, out of the bunkers that look like they were designed more for warfare and defense against shell fragments than for a presenting a spot of trouble on the golf course. Woods, incidentally, will be playing this week and if he is still lethal with that two iron and can sink some putts… well.

But back to van de Velde and his bad choice of driver on the 72nd hole.

He hit his second out of the rough. The ball flew wild and hit a grandstand and again landed in the weeds. His third shot went into Barry Burn where it was wet.

But not so wet, perhaps, that he could not hit it out. According to some accounts, when he first arrived at the scene to inspect the damage, van de Velde saw his ball sitting on some kind of vegetation, so a shot might have been possible. But he took his fastidious time about taking off shoes and socks, rolling up his trouser legs, and stepping into the water. By which time the ball had sunk or the tide had come in — the course is on the Scottish coast. Now there was no chance. There is a famous photograph of him standing in the water, pants rolled up to mid-calf, staring down with this look of resignation on his face at a ball three inches or so, perhaps, under the surface. You imagine him thinking, ruefully, that if he just hadn’t been so damned fastidious. So French. If he had just waded in there with his shoes on, gotten his pants wet, and hit the ball.

You win ’em and you lose ’em. Sometimes you eat the dog and sometimes the dog eats you. And so forth.

He took a drop and put his next shot through the green and into one of those bunkers, almost as though he were trying to involve every possible hazard on the course in one hole. He then put the ball on the green and sunk a seven-footer for his triple. Somehow, van de Velde doesn’t get credit for sinking that clutch putt.

Perhaps because he lost the subsequent playoff. Of course he did. He never had a chance. The course had beaten him. Mercilessly.

It has beaten many others, including some players of high repute. When he was 19 and a rising star, Sergio Garcia went 89, 83 in the first two rounds, cried in his mother’s arms and, of course, missed the cut. Phil Mickelson went 79-76 one year, missed the cut, and pronounced Carnoustie unfit for civilized golf. “I don’t think there’s an individual in the R&A who could break 100 on this course,” Mickelson said.

The “R&A,” incidentally, would be the The Royal and Ancient Golf Club of St Andrews, which is the most exclusive fraternity in the universe of golf and serves as custodian of the game’s sacraments, including the Open. No member of the R&A would ever call it the “British Open,” by the way. A bit of charming fussiness.

There are all sorts of stories about the tough, unforgiven nature of Carnoustie. Americans like to call it “Carnastie.” In one Open there, the player who shot the low score in the opening round, blew up in the second and didn’t make the cut. He ran into a little weather, no doubt.

It can rain and it can blow without much warning and with real venom and force. A shot that calls for a seven iron in the morning might require a four in the middle of the afternoon. The higher the flight of the ball, the longer it stays in the air, and the more the wind can push it around. If the wind blows cold, a golfer’s fingers will turn numb. His grip becomes a thing of guesswork.

But the course can be played. One hole, the 6th, tempts players to go left off the tee because there is clean ground there while the right is a wilderness of high grass that will wrap itself around the shaft of a club, smothering a shot.

But just left of the fairway is a fence. It runs the length of the fairway and is the out-of-bounds marker. Go over that and you will be teeing it up again and hitting three.

But left is where you want to go; where the pars, even birdies, can be had and the tournament won.

In 1953, Ben Hogan arrived at Carnoustie to play his first Open. He was only recently recovered and playing again after an automobile accident that had nearly killed him. It was enough that he could walk. Playing golf was closer to a miracle. Playing championship golf… well.

So every day of the tournament, Hogan went left off the tee and kept it inside the fence, driving with such precision, they say, that he was practically hitting out of yesterday’s divots. He won the tournament by four strokes and never played in another Open.

It was almost as though it had been a battle of wills and having won, Hogan figured he had nothing to gain in a rematch. The line he took, on the 6th fairway, inside that fence, is still called “Hogan’s Alley.”

It will be there, luring, tempting, and taunting the best in the world for the next four days.