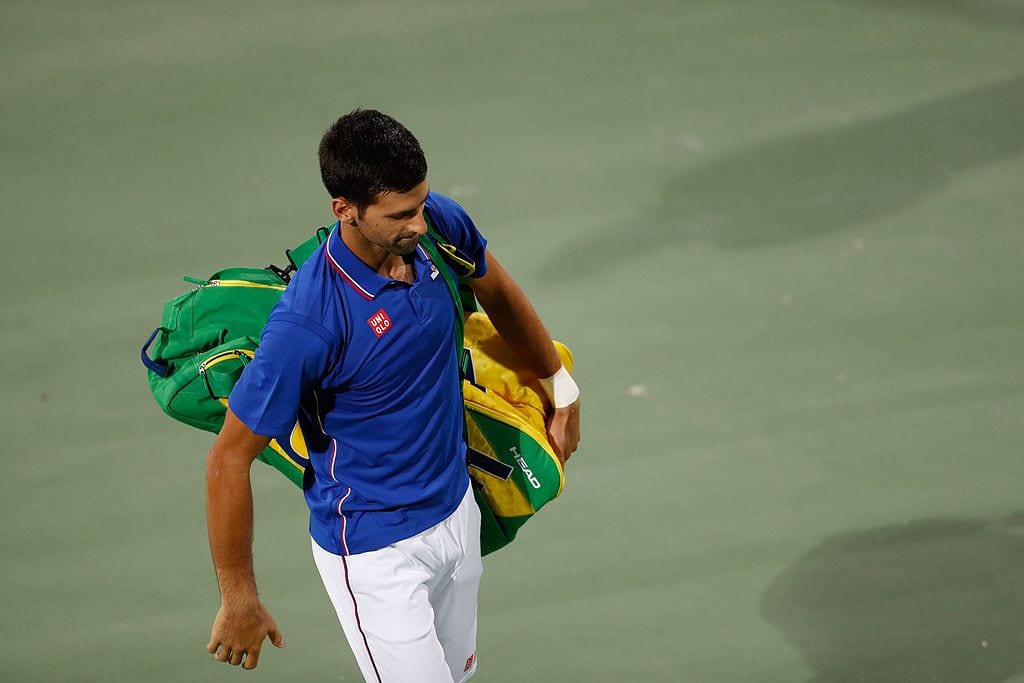 You see where the line is between a good tennis player and an Immortal in the first round match between former No. 1 Novak Djokovic and Rogerio Dutra-Silva on the Philippe-Chatrier Stade at Paris’s Roland Garros the other day.

The Brazilian, a veteran player ranked in the top 100 won some excellent points and broke the 2016 champion to even the score at 4-4 in the third set, his last chance to make a serious stand in the first round of this year’s Internationaux de France, aka French Open. Djokovic broke right back, then held serve at 15 and that was that, three sets to nought.

It was a fine match, even as seen on TV, but nothing to write home about. Anyway we would not be writing home because due to certain circumstances involving the law firm of Jauvert & Jauvert, TAS can only provide some long-distance analysis this year, but never mind the details. The question here is: is the great Serb ace back?

The question is pertinent because every tennis commentator queried by Tennis, the voice of the American tennis establishment, says defending champion Rafael Nadal will repeat, on the rational theory no one can beat him. A non-scientific survey of the international sporting press offers the same consensus. Djokovic, one of the few able to beat Nadal, has been in a prolonged slump worsened by an elbow injury requiring surgery as the season began.

With the loss in five sets by 2015 champion Stan Wawrinka to a stubborn and solid Guillermo Garcia-Lopez, Nadal has last year’s finalist out of the way. He is leading a tough and able Simone Bolelli by two sets when play is adjourned on Chatrier due to rain. The Italian is up 3-0 in the third, but these rain delays usually favor the champ, who uses them to recharge is fierce competitive drive.

And with the defection due to injury of Australia’s bad boy tennis genius Nick Kyrgios, he has one less of the up-and-coming young men to worry over. He has been in fantastic form, taking titles in Monte Carlo, Barcelona, and Rome to prepare his title defense. Like LeBron James on the basketball court, like Mike Trout (Justin Verlander, Max Scherzer, you know what I mean) on the mound, Rafa Nadal is the King. At least on clay. In tennis, surfaces matter; the maestro, Roger Federer, has only one Coupe des Mousquetaires among his 20 Slam trophies.

Moreover, Federer, the Stan-da-Man of tennis in our era, is following last year’s strategy of sitting out the clay season the fresher to be on grass and during the North American summer hard-courts. (He won at Wimbledon, not at Flushing Meadows.) And Andy Murray is out, recovering from injuries that he hopes will be gone in time for the All-England in early July.

Injuries, age; recovery, youth. The beauty of this sport derives from the way it brings out the basics of life in stark simplicity. An individual sport, in which you are upfront and alone: you step up or you do not and there is no team to back you up — or a single star like LeBron James to bail out the team. It is, pace Andre Agassi’s famous quip, not like boxing; you do have to run and you cannot hide.

It is Nadal’s to lose this year, making it likely he will get an unprecedented 11th trophy in a single major tournament. His lean and hungry challengers have fallen short in the endurance tests that are unique to the Slam circuit, or succumbed under Nadal’s clay power game, designed, and perfected for the conditions produced by this surface (limestone and crushed brick, if you ever wondered).

So, not too much suspense here, though y’never know. American men have not done very well on clay in recent years, but Jared Donaldson won his first round match in five sets, showing good form, while Frances Tiafoe and Sam Querrey both have shots at reaching the second week; unfortunately they square off in the first round so only one will (maybe) do it. (Update: it goes to Querrey in three sets; Isner, before the rain, was up two against Tiafoe’s contemporary, Noah Rubin.)

On the women’s side, Venus Williams went down in the first round and her sister goes into action on Tuesday. They have two doubles titles here, Venus has never won the Coupe Lenglen, but Serena has done it three times. The defending champ, Jelena Ostapenko, lost her first round match on an injured foot. Sloane Stephens and Madison Keys easily got through to round two. They are best friends, there was a touching scene when Miss S. beat Miss K. at the final of the U.S. Open last September, real friendship. But still it is a lonely sport.

Ken Rosewall and Rod Laver returned to Roland-Garros 50 years ago, in the inaugural major of the Open era; “Muscles” prevailed over “Rocket” in the finals. He also took the doubles with his compatriot Fred Stolle. Outside the tournament, France was in some turmoil as the cultural revolt known as the May Events continued.

These have been the subject of rather dull retrospectives and remembrances for the past months; for all their charm, you have to admit the French have a predilection for editing their own history rather in the direction of fashion, which is annoying. The fashion is that in the grand scheme of things, the May Events were a Good Thing. As far as I can tell, their main effect was that the French stopped saying “vous” and also gave up on wearing ties and hats. For the past few years, they have been destroying their own grammar, abolishing the gender declensions that charmed (and tortured) students of their language.

The remembrance that came to my mind, perhaps by unconscious association with our Memorial Day weekend when we honor those who gave all for our freedom, was one that no one, to my knowledge, mentions in all the yak-yak. I had in mind a man named Maurice Grimaud. He was the police prefect of Paris, in effect the man responsible for security, and he was heavily handicapped by the fact that his forces were overwhelmingly outnumbered by the thousands of kids who had nothing better to do than skip class, block the entrances to the university so those who wanted to learn could not get in, and instead tear up the cobble stones of the old streets of the Latin Quarter and throw them at the cops, who exercised admirable restraint.

Grimaud, who died ten years ago after a long and distinguished career as a high civil servant, had put out the word that there was to be as little rough stuff as possible, which is why the “revolutionaries” had a field day and for the next half century have been able to compare themselves to the men women and children whom you see in Les Misérables, and who were mowed down by cannon and musket when protesting for actual real reasons, such as having nought to eat. In 1968, the enactors were bourgeois kids, playing at historical drama.

Detachments of CRS and gendarmes (police under military discipline but in this case under Grimaud’s authority) reinforced the Paris uniforms. These were for the most part working class and farm-region boys, young men who had served their country in the last years of the colonial wars and were not exactly impressed with tweed-wearing students who had avoided those bitter wars and had not grown up in the poverty that was still common in those years, yet had the gall to claim they spoke for the wretched of the earth. The young men working overtime to keep the city safe while others spouted verses from Mao and Trotsky must have wondered what future elites the country was going to have, but they kept their cool and, no doubt, had a sense of humor sorely lacking in the feverish brains of bourgeois Stalinists.

In one of the “iconic” photos of the time, the student leader Dany Cohn-Bendit is seen offering a mischievous grin to a stern looking gendarme (who on closer inspection is repressing a sly smile); this has gone down in history as a symbol of the “whole” “liberation” “movement” of the ’60s.

Cohn-Bendit was, in fact, one of the less ridiculous soixante-huitards (in English: hippies, or San Francisco Democrats). He was ferociously anti-communist; the Stalinists and Trotskyists hated him. They piggy-backed the protests he and his anarchist pals started against dorm restrictions on the university campus. But he himself knew he was using sex stuff to kick start the reverse potty training he gleefully wanted to spread all over society. This is why Charles de Gaulle, who was president at the time, referred to the events aschien-lit, dog s….

Dany said they were in it to oppose “imperialism” as well as dorm restrictions, meaning the Vietnam war. What did he know about the Vietnam war? He knew enough to admit, 50 years later, that even then he knew that in Vietnam, he would have ended before a firing squad. Instead, he has a seat in the European Parliament at Strasbourg. It is not clear what they do there, but they get nice perks.

As we know, the year 1968 began with a communist rampage in Vietnam. Known as the Tet offensive, it had as its objectives to shock public opinion in the U.S. and convince our “elites” the war was unwinnable; to hold territory long enough, in such provincial capitals as Hue, to mass-murder civic and intellectual leaders, as well as policemen, who might form the backbone of resistance to their imperialism; and to destroy the Viet Cong cadres in the South, whom the Northern Stalinists did not trust. Although American and South Vietnamese forces, despite taking terrible casualties, threw back the onslaught, these objectives were achieved.

Some commemoration. Better to remember that first Open tournament on the far west side of Paris, on a street named for Gordon Bennett, an American newspaper tycoon and, no doubt, a Yankee imperialist!