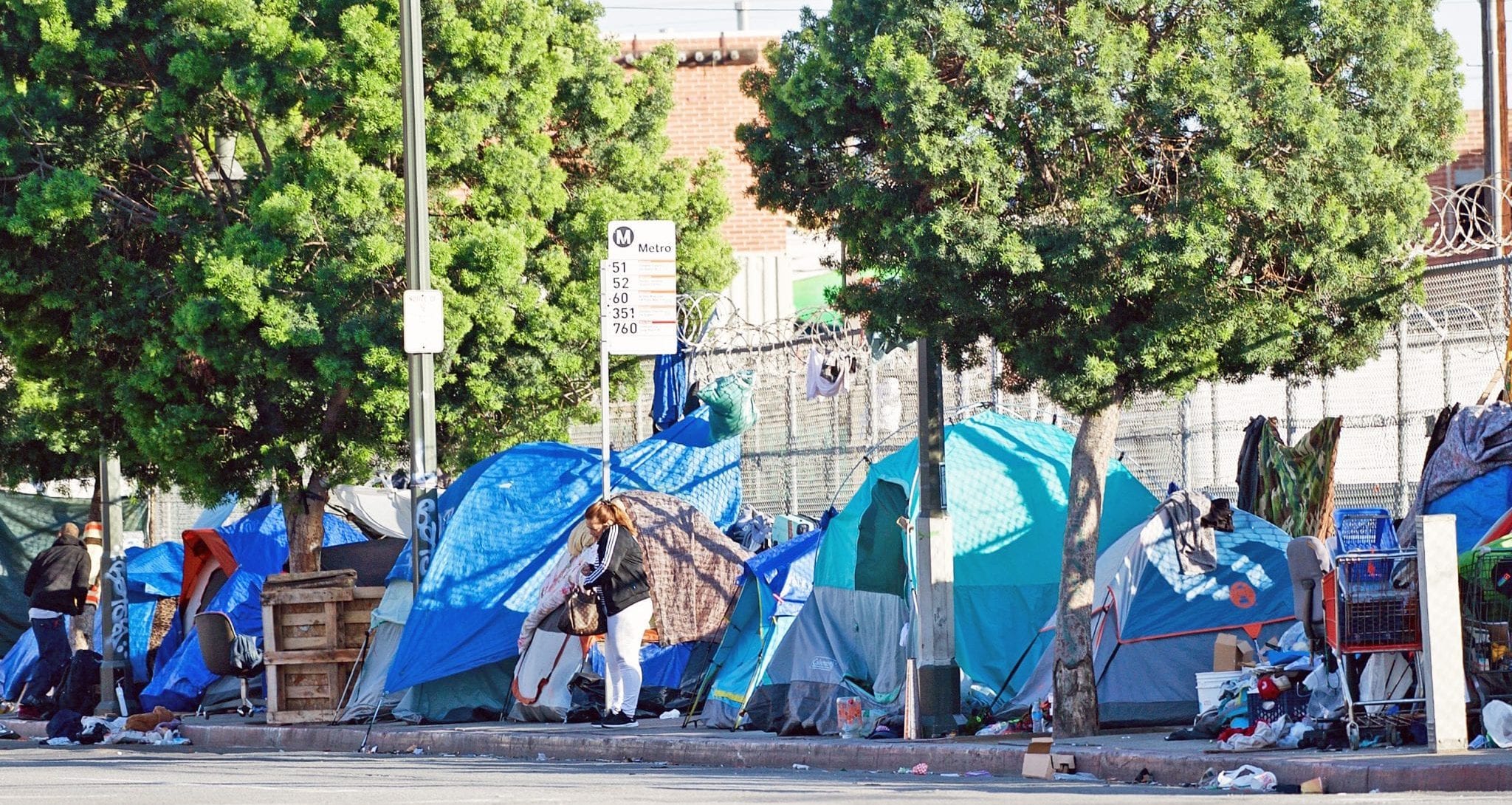 Why does California suffer such a scourge of homelessness and poverty? Why do Californians allow it to go on? Where is the outrage that their fellow citizens are living in filth and squalor, being stripped of their human dignity while degraded and ignored? How is allowing this compassionate?

Some will argue that the homeless problem in California is attributable to things like expensive housing or that the economic downturn left people without resources and then they gave up. Others will say that California incentivizes this behavior. Still others say that the mild climate encourages people to come be homeless there. All of these factors contribute to the problem, no doubt. But none of these factors explain why Californians are okay with the crisis and seem too paralyzed to do anything substantive about it.

There may be an answer outside of politics, or rather a bastardized version of politics that’s become a religion.

America is secularizing. The Left, in particular, has taken pains to excise God from the public square and from personal life. But that does not mean that religion has gone away. Humans are wired for belief, and they are social creatures with a need for community. Because of this, religion will never die, but new religions will pop up.

The Leftist religion is a hodgepodge of new age mysticism that’s not too far away from the prosperity gospel and self-help bromides mixed with absolutism that’s nigh unto Puritanical. The idea that what one thinks about, one manifests, and that their life experiences reflect what their energy brings to them leads to the idea that people suffer because they brought the bad vibes to themselves. Stricken with cancer? It’s not genetics or environment. It’s the energy put off that attracts cancer energy. While some people may suffer because of bad decisions, not all people do. What about them?

Paradoxically, this belief is mixed with a view that much of society is helpless due to their accident of birth or structural racism or sexism or the patriarchy. A whole host of factors conspire to keep some people down. It’s just the way it is. Those people can’t help it.

It’s a strange combination of an omnipotent self as god who is helpless to the all-powerful socio-economic structures preventing his success trapped in an environment that is doomed to fail within twelve years. A religion with a god, a conflicted ideology, a myriad rules and moral imperatives, and an apocalypse.

Without God and the structure of a religion centered on God, a person creates his own religious tenets. The tenets conform to an individual’s own authority. A bunch of people who think the same way are called “enlightened,”; together they have power. Together they take power. They are the mob. Their anger is swift. Their judgment absolute. Anyone outside of the temple of the enlightened is, hashtag, cancelled.

An acolyte of the New Religion says this a lot: “Everyone believes this.” Maybe a consensus builds that global warming is caused by man, for example. Those who resist this doctrine, or even parts of the doctrine, are deemed to be heretics. They are shunned. If they are actual climate scientists, they are branded and ostracized. Some have their careers burned at the stake. The new religionists live and die by the pitiless mob.

Intersectionality and the inherent racism and sexism of the patriarchy serves as a belief pillar. The Democrats, who’ve accused anyone who disagrees with them as racists for years, are destroying one another with accusations of racism and sexism. Why? Because some Democrats disagree with the new socialist ideologues. Clearly, the disagreement isn’t on the merit of ideas. It’s obviously because older white (and black) Democrats are racist, sexist, patriarchal tyrants insistent on silencing women of color.

Abortion is the new religionists’ main sacrament. Interestingly, someone has to die, so someone can live. A blood sacrifice is made to satisfy the god(dess). A baby’s life is drained. Severed.

Nature, Gaia, crystals, trees, the ocean, are worthy of worship. Intuition, feelings, and subjective truth (“my truth”) are elevated above science, objective truth, and common sense.

When anyone questions any of the nonsense, they’re deemed to be closed-minded bigots. Conversation over. If someone violates any of the tenets, forget it. The mob destroys the hapless individual. That person can be anyone from a groveling Kevin Hart to super-mega woke Ellen, who defended him. #Cancelled.

The #Woke religionists are merciless. The rules change daily. Staying ahead of the chaotic new rules is nigh to impossible.

All this is in contrast to Christianity. Christians are fuddy-duddies who have archaic, stupid rules, right?

The central story of Christianity is redemption from sin through the saving sacrifice of Jesus Christ. “Wretches like me” accept Christ’s grace and repent. They change. They become a new creation, something better, something less selfish, something more loving. With the power of the Holy Spirit, believers transform, maybe slowly, certainly imperfectly, failing all the way and struggling, but surely, they transform.

Unlike the New Religion whose rules change in real time, Christianity’s laws are straightforward and have survived thousands of years. The laws are simple, but immutable. Don’t murder. Don’t steal. Don’t covet (want something that belongs to someone else.) Don’t bear false witness (don’t accuse an innocent person.) Honor your parents. Put God first. Don’t worship idols. Remember the Sabbath day. Don’t take God’s name in vain. Do not commit adultery or have sex outside of marriage.

Love God and love your fellow man. That’s the whole thing wrapped up. Forgiveness is necessary. Recognition of one’s own brokenness fuels compassion for others. Compassion prompts Christians to serve their fellow man. They are mandated to do so.

What is a New Religionist motivated to do?

One of the problems that Californians face is that to rid the streets of the homeless, they’d have to judge homelessness to be a bad thing. That means that they’d have to say that being strung out on drugs, having wanton sex and raping people, and defecating on the streets is bad. Just wanting it to stop would mean judging that it is a bad thing that shouldn’t happen. There is a problem of political will because there is a philosophical and religious problem.

The New Religionists paint themselves into a corner. Drug use is fine. Sex with anyone at any time is good. Poor people can’t help themselves. The world is structured unfairly. Give them clean needles.

These same folks do not want those people near them, though. They worry about property values and personal safety and hygiene for themselves. They also worry about plastic straws and bags. Those things are evil and harm ocean creatures.

People being degraded and left behind on their streets is less of a concern. It’s the state’s problem. But it really isn’t a problem. Those people are choosing the lifestyle that works best for them. Who am I to judge?

It is a stunning lack of compassion that allows homelessness to flourish in California. That state’s citizens are so intent on withholding judgement that they’ve impaired their ability to help. Why would one intervene to stop someone’s valid life choice?

In this toxic circling eddy, thousands of people are lost and forgotten. They are alone. They give up. They know that no one cares for them.

California has an all-powerful state that seems powerless to stop this growing menace. Taxing everything, they have resources aplenty. And this, too, causes calloused hearts. Why do anything charitably when the state takes a huge portion of the worker’s wage?

Both the street dwellers and those who hold their noses as they walk past them have given up. Far from the utopia that the New Leftism has promised, the ideology has resulted in hopeless nihilism.