I’m old enough to remember when Fred Barnes wrote for The New Republic. Of course, back then Barnes wasn’t as conservative as he is now, but TNR was also a much more liberal-moderate magazine. It was far from the silly leftist rag that it has become.

Now it is on the verge of going full communist. This showed up in my email box the other day: 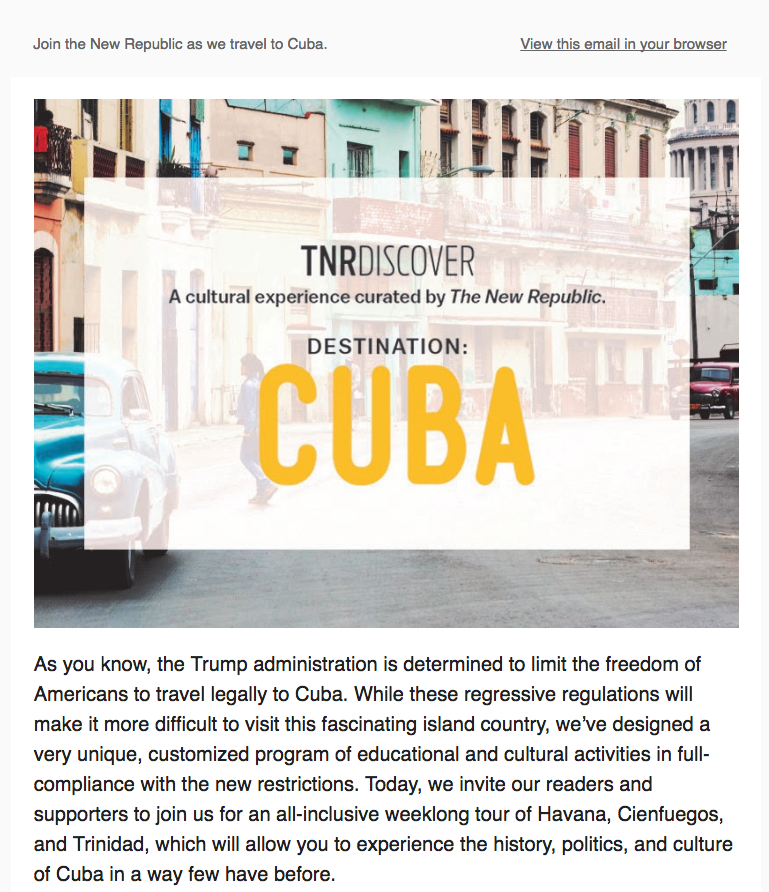 This is the sort of advertisement you generally see on the websites of radical lefty groups where “traveling to Cuba” is a euphemism for a pilgrimage to pay homage to Fidel and Che.

The invitation states that the trip will “allow you to experience the history, politics, and culture of Cuba in a way few have before.” Perhaps that includes a field trip to the notorious Villa Marista prison and visits with dissidents such as Óscar Elías Biscet and Armando Valladares. That, indeed, would be a way to experience Cuba that “few have before.” But don’t bet your rent money that those stops will be on the tour.

It’s been a long, sad decline for TNR. It is a long way from when the magazine backed the Iraq War in 2002 and started letting conservatives like Byron York occasionally appear in the magazine. TNR received a lot of angry emails from readers over its support for the Iraq War and saw its paid circulation plummet by 25 percent in 2003.

The editors did a 180, apologizing for their support of the war. They went to extreme lengths to undermine the war effort, publishing the reports of Scott Thomas Beauchamp without fact-checking them. Beauchamp slandered U.S. soldiers by portraying them as “mocking a woman disfigured by an injury, getting their kicks by running over dogs with Bradley Fighting Vehicles and playing with Iraqi children’s skulls taken from a mass grave.” After the objection of conservative bloggers mounted, both TNR and the U.S. Army launched investigations, and, eventually, the then-editor of TNR, Franklin Foer, disavowed Beauchamp’s columns. The scandal showed the magazine for what it was: a bunch of young lefties with strong prejudices against the U.S. military fed, in part, by a readership that likely has similar prejudices.

This was a serious blow to a magazine that just a few years earlier had been reeling from the Ruth Shalit plagiarism scandal and Stephen Glass scandal, another incident showing a magazine whose employees lived in a bubble.

In 2012, Facebook co-founder Chris Hughes bought the magazine. In 2014 he fired editor Franklin Foer and replaced him with Gabriel Snyder who had worked at Gawker and Bloomberg. This precipitated a number of resignations by many long-time journalists and writers at TNR, including Jonathan Chait, Ruth Franklin, Ryan Lizza, and Leon Wieseltier.

Since then, it has been a hard charge left. The first issue after the mass resignations had a cover story that was both self-flagellating and virtue-signaling at the same time. “The New Republic Legacy on Race,” by Jeet Heer, claimed TNR was better on racial issues from the 1930s to the 1970s than it had been in recent years. “How can this magazine—or any legacy institution—come to terms with a blighted legacy on race and transcend it?” Heer asked. (For more examples of radical leftism, “It’s Time to Ban Guns. Yes, All of Them,” by Phoebe Malt Bovy, TNR, December 10, 2015.)

Now TNR is poised to take the final step on its journey to the far left. But, as always, that is seldom a good idea: 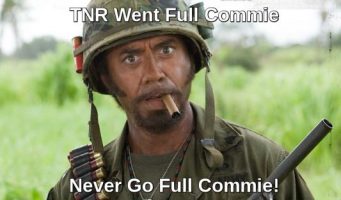