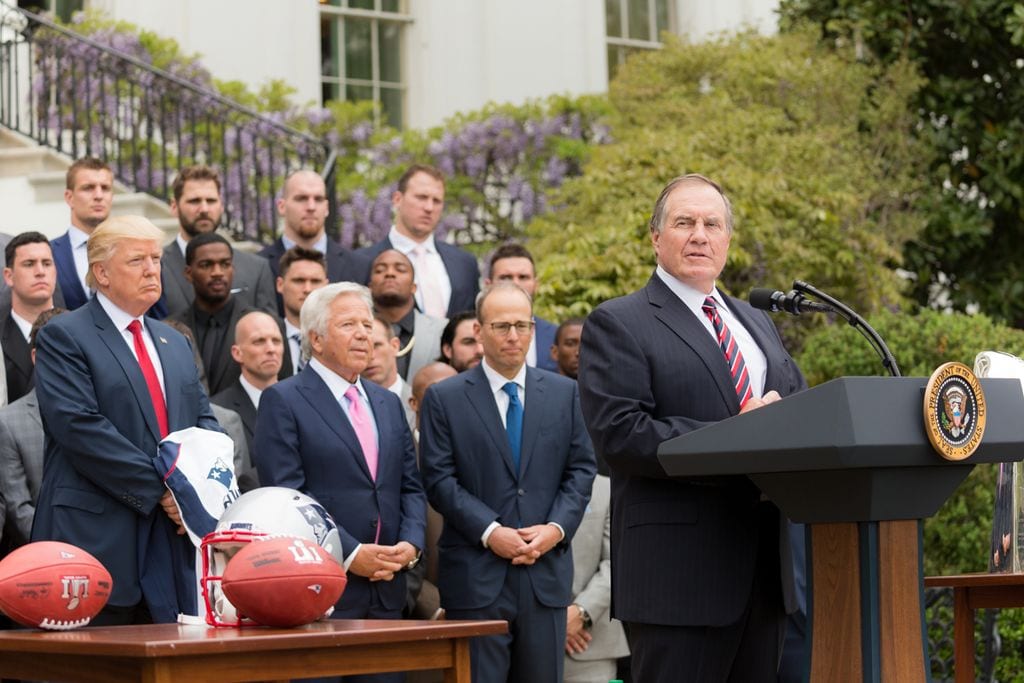 If you want large numbers of people to hate you, accomplish something great.

Just 16 percent of Americans cheer for the New England Patriots to win the Super Bowl, according to a Monmouth poll. Thirty-seven percent want a Philadelphia Eagles win. A slightly larger percentage roots for the Patriots to lose than roots for the Eagles to win.

An analysis of Twitter data by Betonline.ag — sure, not exactly the Pew Research Center (or the Monmouth University Polling Institute, for that matter) — claims that every state outside of New England (and Connecticut and Vermont, too) roots for the Eagles save for North Dakota. The Roughrider State apparently still appreciates teams that ride rough over the opposition.

Others knew this feeling before the five-time Super Bowl champions did.

Shortly before John D. Rockefeller became the world’s first billionaire he earned the tag “the most hated man in America.” The Koch brothers donate hundreds of millions to charity yet headlines — “Inside the Koch Brothers Toxic Empire,” “Evil Rebranded? The Koch Brothers in 2016,” “The Vile Koch Scheme to Make $100 Billion Destroying The Environment With KeystoneXL,” etc. — depict them as malefactors. Microsoft so effectively gave the people what they wanted that the government hectored them with an antitrust suit.

The government, or more precisely Roger Goodell, launches anti-trust actions of sorts every few years to knock the Patriots off their pedestal. Goodell and Colin Kaepernick seem like the only people associated with the NFL more hated than the New England Patriots. Oh, yeah, and O.J. Simpson — O.J. Simpson, Colin Kaepernick, and Roger Stokoe Goodell. Despite the commissioner joining the ranks of Patriots haters, few defect from those ranks.

Why the lack of Patriotism?

The mumbling and monosyllabic Bill Belichick strikes the press at least (especially?) as a villain out of central casting. Bill Parcells nicknamed his assistant “Doom and Gloom.” Others, aghast at his hooded fashion sense, call him “Darth Vader” and his team “The Evil Empire.” For a humanizing moment in the recent ESPN documentary on the two Bills, Belichick comes across just like everybody else in shedding a tear — until one realizes that the former New York Giants assistant coach does so out of nostalgia upon entering the Giants film room. “I’m sorry,” Belichick explains in the dated clip. “Just a lot of memories here.”

Despite the Hooded One playing perfectly the role of the bad guy, his best player better explains Patriots hatred.

Tom Brady is better looking than you. He’s richer than you. And he married a super model. Brady boasts more playoff victories than every team in the NFL save for the San Francisco 49ers, Green Bay Packers, Pittsburgh Steelers, and Dallas Cowboys. If he wins Sunday, he cannot fit all of his Super Bowl rings on a single hand. He appears as the walking, talking symbol of his team’s success.

Sure, some still hate him for displaying a “Make America Great Again” hat in his locker, and resent his coach and the team’s owner for supporting Donald Trump’s candidacy. They explain Brady’s success with “cheating,” pointing to the controversy over the team playing with deflated balls in the AFC Championship Game after the 2014 season.

But these seem like rationalizations that mask the envy and jealousy that fuels the hatred.

We don’t celebrate greatness. We jeer it. “Congratulations!” no longer greets the victors. “No fair!” does.

This mentality extends beyond sports to business and politics. Consider the recent election. People who said Donald Trump could not win now say the Russians, not the Americans, elected him president. His Kenyan predecessor violated the Constitution to become president, and his predecessor won by way of hanging chad and the Supreme Court — at least that’s the story their political adversaries are sticking to. Activists vilify the one percent. Their success marks them as evil. We increasingly regard winners as illegitimate, as though victory acted as a slur against our egalitarian ethos.

This doesn’t fully explain the anti-Patriots animus. People in Philadelphia naturally want the Eagles to win and people elsewhere somewhat naturally grow sick of the monotony of the same team seemingly representing the AFC every year. But many boo the Patriots because any success reminds them of their failures.

Winners bring out the losers.