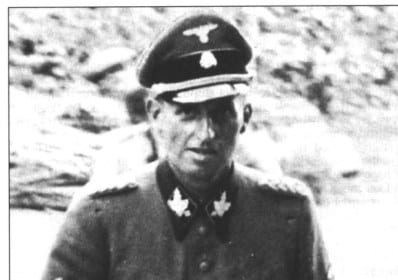 The Hidden Nazi uncovers a previously uncovered war criminal, Waffen-SS General Hans Kammler, who was never brought to justice even though clearly guilty of war crimes. Though his crimes were well known to the Allies during and after the World War II, historians haven’t written much about him. That may be because Kammler was reported to have died as the war ended. Even so, he appears in American hands after that rumored death. Where Kammler ended up, the authors’ research and the documents don’t say, although they suggest he might have reached Argentina.

As World War II in Europe drew to a close, the Allies and the Soviet Union scrambled to defeat the German armed forces, round up Nazis, and locate documents, weaponry, and treasure. In particular, they tried to find the scientists and documents related to the Nazi rocketry programs, like the V-1 and V-2, jet engines, nuclear weaponry research, and other cutting-edge military technologies. The Soviet Union got some, the Allies got some, and other people, documents, and treasure weren’t found. 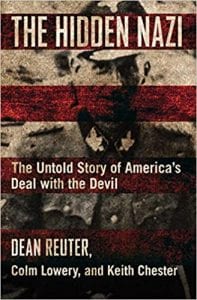 Taking advantage of the knowledge of Nazi scientists and soldiers required a strong stomach, liberally coated with Pepto-Bismol. The upside was high; the V-2 alone was “a bona fide engineering marvel” able to take off vertically and fly at nearly five times the speed of sound.

On the other side of the ledger, those Nazi scientists knew that slave laborers who were worked to their deaths built their research facilities. The authors note that Werner von Braun passed a fenced workers camp, where slave labor was housed, on his way to work at Peenemünde, acknowledged that “forced laborers” were killed when Allied bombs fell on their camp, and visited the underground facilities at Nordhausen on 12 occasions, where he saw the workers living in the tunnels. The authors conclude that, for both his own activities and knowledge and the actions of his subordinates, von Braun could have been prosecuted as a war criminal.

Nonetheless, von Braun’s scientific and technical knowledge was so great that, even after he was in American hands in May 1945, a team of Soviet paratroopers attacked the American forces holding him in an unsuccessful effort to grab von Braun for themselves.

Waffen-SS General Kammler likely fell into the same pot as von Braun. Albert Speer, the minister of armaments and war production for the Reich, worked with Kammler throughout his career. Early on, Speer saw Kammler as “inconspicuous, sociable, and very hardworking,” and observed that “No one would have dreamed that someday he would be one of Himmler’s most brutal and most ruthless henchmen.”

Kammler was a civil engineer who joined the Nazi Party early enough to wear the Ehrenwinkel or “Old Campaigners’ Chevron.” In 1933, after Hitler became chancellor, he joined the SS and moved up through the bureaucracy during the 1930s. Kammler assumed responsibility for all construction for the Luftwaffe on projects ranging from staff housing and personnel buildings to an air transport communications network.

During the war, he supervised the construction of concentration camp buildings, gas chambers, and crematoria at sites including Auschwitz-Birkenau, Buchenwald, and Mauthausen. The authors note, “Even if Kammler didn’t invent the gas chambers, he certainly perfected them, and he oversaw their installation — after traveling the Reich to review the alternative methods and rejecting them as insufficient in comparison.” Later, he oversaw the construction of the underground facilities with slave labor at Dora-Nordhausen, to which the rocket scientists relocated after the Allies found them at Peenemünde.

Moreover, by the end of August 1944, Kammler was fully in charge of the V-2 program. It also appears he was involved in the Nazis’ efforts to build nuclear weapons, a project that did not produce a bomb, but did produce research and fissile material. Both the Allies and the Soviet Union put the German nuclear weaponry knowhow to use after the German defeat.

Kammler surrendered to American forces on May 7, 1945. Two days later, though, he was reported to have killed himself. Those reports have not been corroborated by the finding of his body or his identity disk, papers, and sidearm as would be expected. More to the point, another writer claims that there were 13 different accounts of Kammler’s death, with multiple inconsistencies. True or not, though, the reports were convincing enough to induce Nazi-hunters to focus on others.

The documentary evidence the authors have assembled shows that Kammler was in American hands after his reported death. First, he shows up at Kohnstein Mountain in Nordhausen, where he was taken to help orient the Americans to the facility layout and identify scientists. Subsequently, the Counter-Intelligence Corps (CIC) interrogated Kammler about SS-controlled bank accounts. In July 1945,  the Combined Intelligence Objectives Subcommittee, an Allied effort, noted that it had asked its American arm to locate Kammler for interrogation, a request that other American intelligence personnel ignored. As late as November 1945, a memorandum from a Brigadier General McDonald of the Army Air Forces directed one of his subordinates to “personally interrogate Speer, Kammler and Sauer” about the Germans’ underground facilities and to “report your findings to me.”

The Hidden Nazi is an extraordinary work that combines meticulous and extensive research with solid analysis. The authors capture the shifting tectonics of the war’s end, when many Nazis sought to save themselves and the Western Allies and the Soviet Union each tried to scoop up Nazi scientists and their knowledge for future use. Last, it was a time when deals with the devil, like the one the authors describe that saved Kammler, were made.