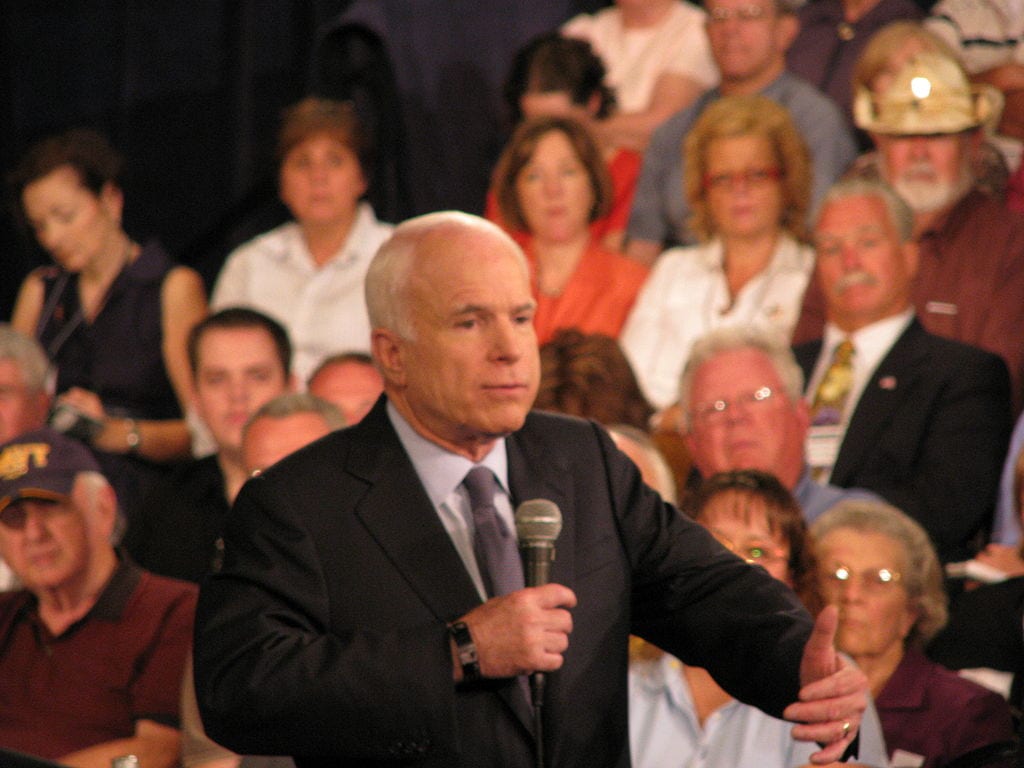 It was Friday, February 8, 2008. The place was CPAC, the annual gathering of conservatives in Washington. It was the night of the premiere event, the Ronald Reagan Banquet. The speaker earlier that evening had been George F. Will.

This much-anticipated CPAC was expected to be one of the best because it would fall early in the Republican Primary. There was sure to be fireworks among those angling for the Republican nomination. What transpired, however, couldn’t have been more anticlimactic. Somehow, Senator John McCain, squishy moderate extraordinaire, had managed to already secure what appeared to be (and was) a stranglehold on the nomination.

The CPAC faithful were despondent. I sat in the bar area with a small table of Republicans brooding over the unexpected, undesired nominee. As we contemplated November Armageddon, entertainment was provided by an intoxicated young conservative who seized a mic and invented an extemporaneous rendition of an R&B piece he titled, “The John McCain Blues.” In between exquisitely measured stomps on the floor (in cadences paced about five seconds apart) and blows into his harmonica, he belted out morose lyrics depressingly fitting to the political situation. The performance went on so long and so naturally that it receded into amusing background music — until an employee from the hotel staff reclaimed the mic. The drunken performer barked in protest to the spoiler.

“What did he say?” I asked the kid’s girlfriend.

“He called the guy a communist,” she told me, with a roll of the eyes.

And so it was. The stage was set for November 2008. It would be John McCain vs. Barack Obama. The uninspiring moderate vs. the Chicago radical promising nothing less than a “fundamental transformation” of the United States of America.

It was no contest. Obama won in a landslide and proceeded with his cultural revolution. America would never be the same.

And that brings me back to George Will that evening at CPAC.

The conservative columnist tried to assuage the faithful by noting that a liberal colleague had remarked how lucky the Republicans were to have a man like John McCain as their nominee. I grimaced and groaned, nearly shouting from my seat: “Hey, George — is your liberal pal going to vote for John McCain?”

The answer, of course, was no. Not a chance.

Such was supposed to be the great political advantage to the GOP nominating every liberal’s favorite “maverick” Republican that year: the mighty McCain would appeal to moderates and independents.

Until, that is, he didn’t. Instead, every liberal and the majority of coveted independents cast their votes for the President of Fundamental Transformation. The glorious “swing voters” went for Obama over McCain by eight points, 52 to 44%, and thereby decided the election. These political idiots, who stood undecided until the moment they pulled the lever inside their voting booths, won the day for Obama.

This is not to say that John McCain didn’t have anything impressive about him. Quite the contrary. What history should remember of McCain was not merely his dubious loss to Obama in 2008, but what he endured in Vietnam. What he suffered there was truly heroic.

In 1967, the communist Vietnamese captured the young McCain after his aircraft was shot down. They hoisted their screaming prisoner in the air with arms tied behind his back. He was permanently maimed from the abuse in the Hanoi Hilton. All along, he refused a deal for early release that would have swapped his freedom but left his buddies behind.

While the likes of McCain were tortured abroad, homegrown radicals like Bill Ayers and Bernardine Dohrn and Jane Fonda and Tom Hayden and Mark Rudd torched them as “baby-killers” and “fascists” in an unjust war of American “colonialism.” McCain and his servicemen would come home to a war lost not on the battlefield but on college campuses and in the media, as the likes of Ayers and Dohrn and Fonda and Hayden and Rudd prevailed.

Even then, the ’60s protesters weren’t through beating John McCain. They would whip him again in November 2008.

In 2008, these same ’60s communist revolutionaries reemerged from the ideological wilderness in a group called Progressives for Obama. Barack Hussein Obama was their golden child, and John McCain remained their adversary.

In the ’60s, the revolutionaries proudly wore rings that were literally hammered out of downed U.S. aircraft. To them, McCain was one of those GIs — from a decorated family of military men — who had fought for American “imperialism.” Who knows, one of the radicals may well have worn debris from McCain’s very plane.

Many Americans during the 2008 presidential race talked of McCain vs. Obama almost blandly. Here was an old guy vs. a young guy. McCain himself wasn’t a particularly interesting candidate. And yet, Barack Obama’s defeat of John McCain that November was a profoundly powerful symbol from a generation past but still very much alive, from wounds that hadn’t healed. Lingering still were shadowy characters from distant campaigns. The murky ’60s figures coalesced around Barack Obama, who was their ideological godchild for another political round.

John McCain was the beaten political prisoner, taken down a second and final time — this time on November 4, 2008.

For his part, the frustrated Arizona senator had tried to make an issue of the likes of Bill Ayers during the campaign. He questioned Obama’s association with such nasty radicals. But the prized, resplendent “swing voters” didn’t give a damn. They blew with the zeitgeist. They blithely cast their ballots for the Alinskyite community organizer. They obliviously voted for fundamental transformation.

May he now rest in peace.

Paul Kengor is professor of political science at Grove City College. His books include Dupes: How America’s Adversaries Have Manipulated Progressives for a Century and The Politically Incorrect Guide to Communism.