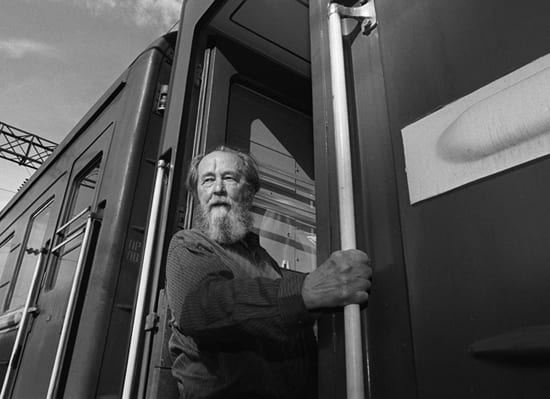 At The American Spectator, we always agreed that it was quite fair and true to admonish our neighbors (and now our children and even grandchildren) to remember that the Soviet Union was defeated, and thus the Cold — often hot — War won by the Free World, largely thanks to three men: Ronald Reagan, Karol Jozef Wojtyla, and Lech Walesa.

We thought as well, however, that you could not beat the Soviet Union before communism was exposed for what it really was, and this required an inside job. It was done by a man who took almost everything communism could throw at him — we say almost because he did not get a bullet in the neck in the basement of the Lubyanka prison — and lived to write it down — it and much besides: the whole appalling story.

The 40th American president — ably aided by Lady Margaret Thatcher during those last dicey years of West vs. East, convinced the Soviet leaders that they would never conquer a coalition of free men living in free nations. The Polish Pope — John Paul II — showed them their lies and the cant with which their apologists in the West sought to cover them could not replace the faith carried by the eternal truths of the West’s great faiths. The Gdansk ironworker showed the working class they could break the chains communism put on them.

These were champions, and they stood for thousands of others, indeed millions, who over three quarters of a century held their posts on the ramparts of freedom. This is another way of saying that what the Soviets represented could never have won a free election; and indeed they never did.

Opposing communism required temporal weapons, but weapons of the spirit as well. For there was a mental fight that had to be won, the fight William Blake alluded to in “Jerusalem.” That was the fight for freedom against tyranny. The great, the overweening and desperately seductive tyranny had a name: communism. And just as it took many, over decades, to resist and finally exhaust and defeat the Soviet tyranny and confound its imperial ambitions, it took years and decades to defeat the ideas — the ideology if you prefer — on which it was based. And if there was one champion who defeated communism, who demonstrated the rot at its core, it was a man born a hundred years today, Aleksandr Solzhenitsyn.

There is a reason the Americans who defeated the other aggressive tyranny of the last century, Nazism, referred, often as not, to “Godless Communism.” That was a fair and accurate description of the enemy, just as Godless Nazism would have worked to designate the savage criminals who took over Germany in 1932. Solzhenitsyn concurred. He could conceive of a private resistance without God against the evil system, but he came to believe that neither an individual man nor a nation could survive without reference to a supreme being, in his case the deity of Russian Orthodox Christianity.

Solzhenitsyn, born a year into the Russian Revolution and four years before the official creation of the Soviet Union (in his infancy the anti-Bolshevik White forces were still resisting the Red forces in his native region), was brought up a believer, but his deepest spiritual knowledge grew out of his experience in the Gulag. This (the name is the acronym for a typical Soviet euphemism, “Main Administration of Camps”) was the vast system of forced labor camps to which were sent those who did not buy the bill of goods offered by Lenin and his comrades — or simply fell afoul of them for arbitrary reasons. Solzhenitsyn was sent there after serving in the Red Army in World War II, for an offhand remark about the supreme comrade, Stalin. He spent eight years there, including two in a relatively comfortable location where scientists were put to work.

The privilege, due to his having earned a degree in mathematics before the war, may have saved his life. His vast body of writing on the camp system showed that it was designed and maintained to be a combination slave labor system and graveyard. By his reckoning some 60 millions passed through it, almost all of them Russians. The Russian Revolution, and the communist ideology that drove it, promised a better world, but it was a death march.

The system might have killed him even after he had survived his sentence. He was transferred to permanent exile in a remote region of the Soviet empire; but during the short years of the Khrushchev “thaw” in the late 1950s, the communists tested moderately liberal waters and tried to disown Stalin. There were some rehabilitations, though the Gulag system continued. There was also some relaxation of censorship, and some of Solzhenitsyn’s writings, which he had been working on secretly, were published.

One of these made his name known around the world. One Day in the Life of Ivan Denisovich, a short novel written from the perspective of a zek, or camp prisoner, showed with stark realism the dehumanizing purpose of the camp system. It also conveyed the possibility of tiny acts of resistance that could sustain a prisoner’s will to live, even — as in the case of the novella’s eponymous hero— without reference to a faith to take the place of the official lies.

The international success of Ivan Denisovich was such that even after the thaw froze over and hardline Stalinists returned and overthrew Khrushchev (whose “soft” line was strictly relative, as the Hungarians found out when they uprose against being a Soviet satellite), his life was protected by his fame. Though his rehabilitation was rescinded (he went from “Soviet patriot” to “traitor”) and he could no longer publish, he was relatively secure physically.

He was able to keep smuggling his work out of the Soviet Union, with ever-growing impact on public opinion. Recognized as a giant in the tradition of Russia’s great writers, he was awarded the 1970 Nobel Prize in Literature.

The importance of his writing cannot be overstated. What remained of a fellow-traveling intellectual class in the West was shaken. Especially when The Gulag Archipelago began to appear in translation (it was first published in a Russian edition in France), it had the effect of an intellectual neutron bomb: fellow-travelers stayed alive, but the mental universe they had lived by was shattered.

The Soviet leadership decided that if it could not silence the prophetic writer, it could at least get rid of him. He was stripped of his Soviet citizenship and unceremoniously put on a flight to Germany, West Germany as it then was. His wife and three sons were allowed to follow shortly after.

The Soviet leaders were not mistaken in calculating Solzhenitsyn did more harm to them as an internal captive whose voice was eagerly heard in the West than as an émigré anti-communist living in freedom. During his nearly 20 years of exile, mainly in Cavendish, Vermont, he continued his monumental work of describing, in narrative history as well as in memoirs and historical fiction, the evil brought upon Russia by the Bolsheviks. This work will endure, though in his own lifetime it was far less read than the works from inside the vast prison.

It will, in fact, be essential to understanding the 20th century, whose political thread was the struggle between liberty and tyranny. But in the short term, Solzhenitsyn was misunderstood. When he tried to warn Americans that their moral backbone was bending, he was rebuked as an illiberal authoritarian. But he was only saying the truth as he saw and experienced it.

The West, he told a Harvard Commencement in 1978, was in fact losing its ability to recognize its own failings, the most glaring being an obtuseness regarding the difference between right and wrong. It was vulnerable to attack from without — he condemned the American retreat from Vietnam as the abandonment of a just cause — and more insidiously from within. One can scarcely exaggerate the warnings he would utter today, were he again invited to Harvard.

In these pages we did not object to the scolding Solzhenitsyn was considerate enough to give us. In fact, we put him on the cover in 1980. He had been denounced by liberals, disinvited at the White House. But what good is a truth-teller who does not frighten and shake you up?

Anyway, an invitation to an Ivy League Commencement is inconceivable today. Which may be the best evidence that his stern words ought to be read again, along with his indispensable books. If it is any consolation, and it should not be, he was welcomed back to Russia when he returned after the collapse of the Soviet Union, and lived there until the end of his long life, in 2008, without scarcely more honor than he had found during most of his years in Vermont.