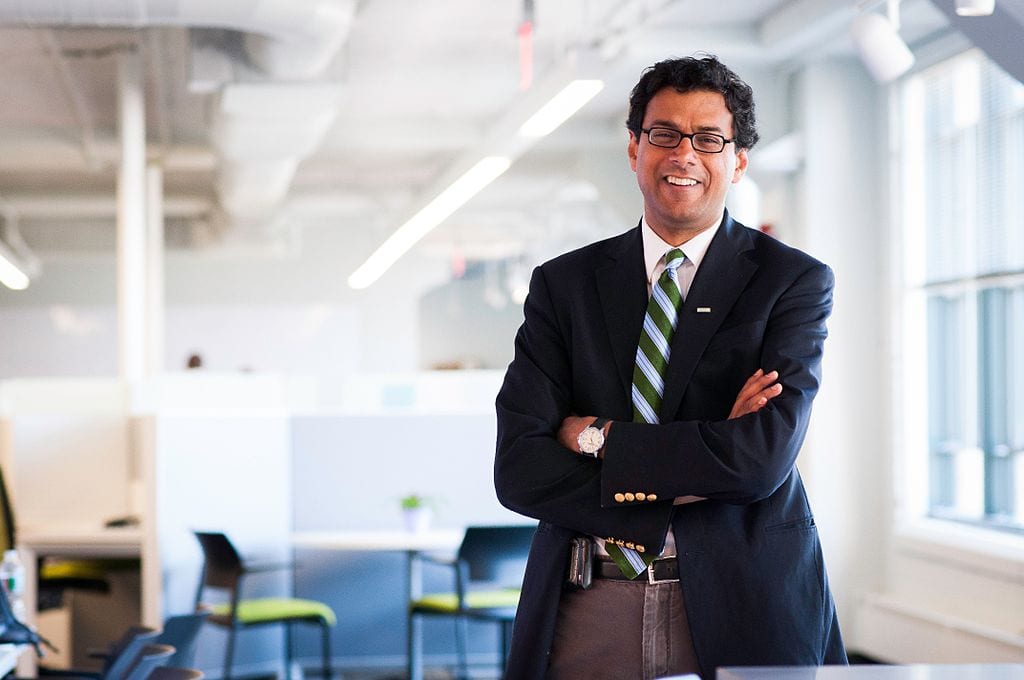 Amazon, Berkshire Hathaway, and J.P. Morgan Chase tabbed Atul Gawande to lead their nonprofit venture to provide better healthcare cheaper to their million-plus employees and family members dependent on the coverage they provide.

Gawande cites “better outcomes,” “better satisfaction,” and “better cost efficiency” as the primary goals of the venture. If the novel approach works, it may work for more than just the employees of those three companies. Gawande notes that “what we discover has to be open to everybody” and divulges what many, including your correspondents, suspected, namely, that serving as a model “absolutely” is one of the points of the enterprise.

In an interview this past weekend with Judy Woodruff at the Aspen Ideas Festival, Gawande laid out some basic ideas guiding the big idea announced by Jeff Bezos, Warren Buffett, and Jamie Dimon earlier this year.

“Everybody feels the system is out of their control: the payers, the patients, and the providers,” Gawande explained. “The simple nature of it is that when you provide ways and tools that get them together around the common goal you can get dramatic results.”

He names high administrative costs, pricing, and “misutilization,” which he defines as “the wrong care at the wrong time in the wrong way,” as culprits in the cost explosion. He aims to “take some of the middlemen out of the system.”

Americans, particularly health care professionals, “recognize we’re putting 18 percent of our economy into healthcare. But we have pretty good evidence that 30 percent of it is of no benefit to the patient and often to the harm of us as patients.”

Many of the ideas he touted appear reasonable. But Gawande’s views on healthcare make him a strange choice to lead the project launched by three big employers. “Even though I’m going to work for a bunch of employers,” the surgeon confesses, “employer-based care is broken.”

He endorses single payer to take employers out of the equation. “In what way does it make that system better?” he asks of work requirements tied to Medicaid coverage. “It doesn’t.” Gawande heartily endorses Obamacare’s “essential health benefits” — including maternity care and mental-health coverage for people who do not want it — and criticized efforts at a more à la carte approach despite the obvious savings that such an approach offers. He wants to take the profit motive out of medicine, which leaves less powerful incentives for inventors and drug developers.

Although a surgeon by profession, Gawande made his name as a writer for the New Yorker, Slate, and other liberal-leaning publications. He entered politics prior to medicine, laboring for presidential candidates Gary Hart in 1984, Al Gore in 1988, and Bill Clinton in 1992. His passion, at least from listening to him speak for an hour, appears as reform in politics rather than reform of healthcare.

This does not doom the ambitious project. But given its raison d’être — providing a model of efficient, better care with better outcomes for the private sector — any preoccupation with legislative reform distracts from the worthy goal that Warren Buffett describes as eradicating the “tapeworm” feeding off the American economy. Gawande’s advocacy of the government paying all medical bills — going so far as to divorce one’s responsibility to work from one’s right to healthcare — further threatens to make that tapeworm even more gluttonous. And with U.S. spending on healthcare eclipsing federal revenues, the idea of the government taking on all healthcare costs seems a nonstarter — even if Kamala Harris, Elizabeth Warren, and other presidential aspirants heartily endorse it.

Gawande’s politics need not corrupt his worthy cause to make healthcare cheaper, better, and more efficient. And if the model works as he hopes it does, business might just make politics a big player in the reform of American healthcare.