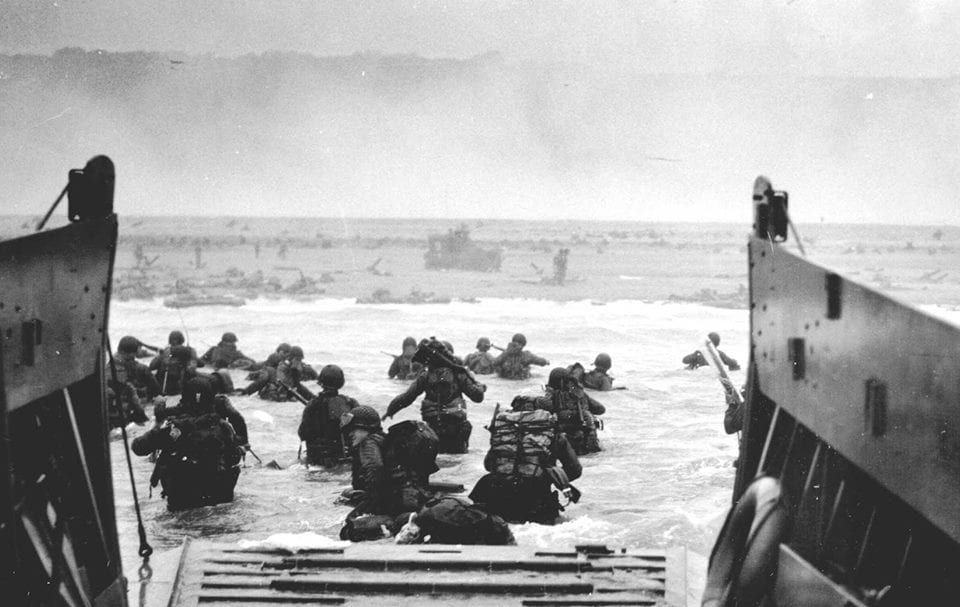 In my capacity as a certified, government-inspected old coot, I have taken particular interest in the bubbling excitement over the 75th anniversary of D-Day. It takes me back — not to D-Day itself, when I was in knee pants, but to the 18th anniversary thereof in 1962. Darryl Zanuck’s The Longest Day brought to stirring cinematic life on that occasion Cornelius Ryan’s D-Day book of the same title.

I still find great satisfaction in Zanuck’s film, but here’s what I remember about 1962. We — well, a lot of us — who went to see it wore coat and tie or heels. It seemed the thing to do. As the house lights went down, the sound system roused us with “The Star-Spangled Banner” — the real one, with trumpets and drums and no swaying hyper-inflected nightclub singers. We in the house rose as one, with hands over hearts. Many sang. It was a big deal, in keeping with the occasion celebrated and the sacrifice required to liberate Europe from evil.

By coincidence, the other day, I learned from the New York Times the present locus of evil in the world. Times columnist Maureen Dowd identified the attorney general of the United States, William Barr, as the “perfect villain” of the Mueller report saga. More than a mere villain, it seems: “devious-devising,” “crooked-counseling” and, at the end of the day, “diabolical.”

I stared at that last one. I continue to stare. Barr, by Dowd’s account, is diabolical, as if glowering before a Salem tribunal. He revealed his horns, it appears, in his hourlong CBS interview with Jan Crawford last week. We were hungering — weren’t we? — for an account of Donald Trump’s knavery. What did we get? Barr’s insistence that evidence didn’t support unconstitutional behavior on the president’s point. Grrrrrr. Snarl.

To this we have come in our national life since 1962. Honest differences of viewpoint are inherently dishonest: as viewed from at least one side. The rope — get the rope! As Barr commented to Crawford: “We live in a hyper-partisan age, where people no longer really pay attention to the substance of what’s said but as to who says it and what side they’re on and what its political ramifications are.” “The Star-Spangled Banner” — who’d leap to his feet for it now?

Possibly more Americans than we would suppose. What I am inclined to call D-Day nostalgia has its heartening side. And why not? There was no fun in Operation Overlord. You were likely to get your head blown off. Many did. But many more kept coming and fighting in the face of it all. And they won! They won! Stephen Ambrose, in his own D-Day book, quotes Sgt. John Ellery of the 16th Regiment, 1st Division, after Omaha Beach: “The first night in France I spent in a ditch beside a hedgerow.… But I felt elated.… I was ten feet tall.… I had made it off the beach and reached the high ground.… I had walked in the company of very brave men.”

It was once upon a time more natural — say, in 1962 — to applaud courage and sacrifice than, culturally speaking, it soon became. Many of us certified old coots are glad we were around then. We jumped to our feet for “The Star-Spangled Banner.” America was beautiful. Ditto, freedom. Ditto, the idea of surrendering human existence for the well-being of others. The beauty was paradoxical: Death turned into life, suffering into fulfillment, battlefield noise into the quiet of peace. Something holy was in it — something the very reverse of satanic.

Which is perhaps why D-Day nostalgia — evidenced by all the excitement of the last reunion of the survivors — finds, it would seem, a secure place among the victims of the fear and explosive emotions of the past half-century when it became necessary, seemingly, to hate and despise fellow Americans, to detect on their garments the fumes of sulfur.

Here’s to the boys of Pointe du Hoc and Omaha Beach and the whole panoply of destruction that lives in an admiration that gives hope of eventual recovery from the wasting disease of hatred.

Oh, say, we can see — never mind the barriers so many work to place in our sightlines.