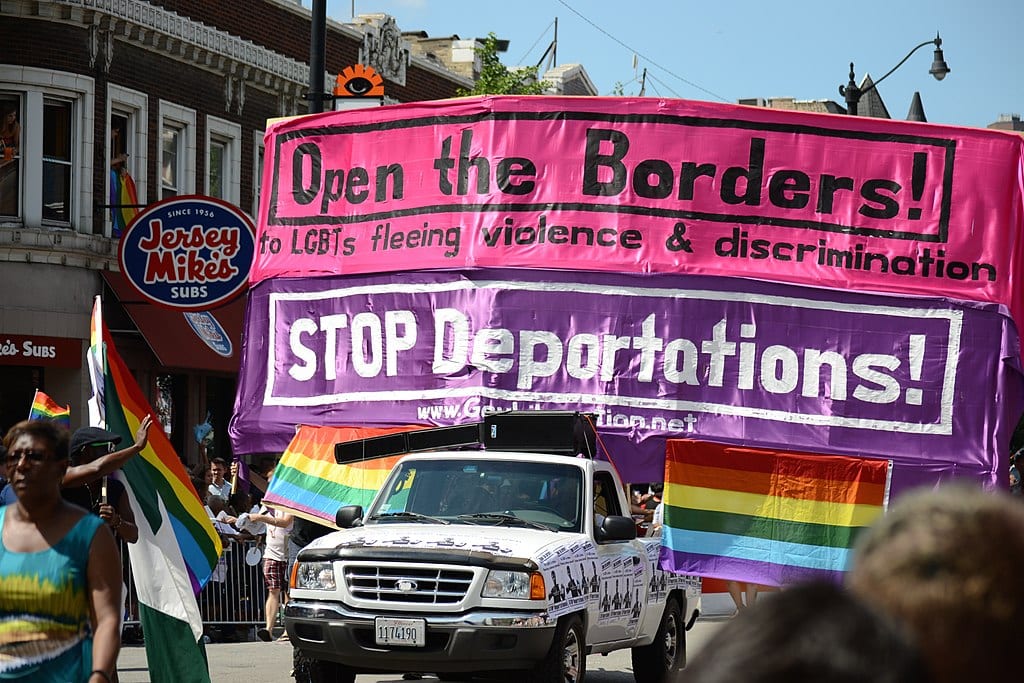 “A wall is an immorality between countries,” Nancy Pelosi said the other day. The New York Times recently ran a piece entitled “There is Nothing Wrong with Open Borders.” Democrats across the country routinely call for the abolition of ICE and the spread of sanctuary cities. Here and there Democrats may dissent from the platform of open borders, but it is clear that the ideological core of the party favors it. Top officials at the DNC, such as Keith Ellison, walk around in T-shirts emblazoned with calls for open borders.

Out of this absolutism has come Pelosi’s recalcitrance during the shutdown. She claims the moral high ground, but for whom? Americans? The party has once again fallen into the hands of San Francisco Democrats who treat invented rights as more pressing than natural ones. They assert out of thin air the inalienable right of foreigners to claim citizenship, as if governments exist not to serve the good of the people who form them but the abstract rights of those outside of that government. If the Republicans are the America First party, the Democrats increasingly resemble the America Last party, fighting not to preserve a stable, secure, and orderly government for Americans but to sustain a fantasy against common sense that prioritizes the demands of foreigners.

Where is the morality in that? It is simply injustice to one’s own citizens dressed up as “humanitarianism” — a policy as unjust as parents who, in determining the security of their home, give greater consideration to strangers than their own children. The Pelosi-led Democrats sound like Charles Dickens’s character Mrs. Jellyby, who neglected her own children while fretting over the fate of a tiny tribe in Africa. They reserve their strongest feelings for people whom they have never met. They congratulate themselves on their morality while failing to discharge the moral duties most immediate to them — to their own constituents and countrymen.

But they, of course, suspend that abstract moral code the moment it collides with their personal lives. As President Trump pointed out: “Some have suggested a barrier is immoral. Then why do wealthy politicians build walls, fences, and gates around their homes? They don’t build walls because they hate the people on the outside, but because they love the people on the inside. The only thing that is immoral is that politicians do nothing and continue to allow more innocent people to be so horribly victimized.”

The moral common sense once taken for granted by both parties has become an occasion for insuperable “controversy,” as Democrats complain about the “dysfunction” of government while refusing to fulfill one of its most basic responsibilities. They often slur Republicans for not “believing in government,” even as they abdicate its core function, providing for the security of the people who consent to that government. Pelosi’s casual call for suspending the tradition of the State of the Union address fits with her casual rejection of the traditional understanding of government and makes her party look like its only goal is burning down Trump’s Washington.

Pelosi’s open-borders absolutism, insofar as it strikes at the very roots of government’s legitimacy, poses a far greater threat to government employees than delayed payments. Unpaid and furloughed federal works mystified by Pelosi’s refusal to negotiate realize that they won’t have jobs at all if the nation’s borders dissolve. Pelosi occupies not the moral high ground but Washington’s decades-long swamp in which pols neglected the security and stability of their countrymen for the sake of future votes and cheap labor from foreigners. It took Trump to confront this crisis once and for all so that government can even continue. A much more profound “government shutdown” preceded this temporary one, which was the bipartisan refusal to close the border, a policy Trump correctly sees as poisonous to the nation’s very survival.

“The fact is: the women and children at the border are not a security threat, they are a humanitarian challenge — a challenge that President Trump’s own cruel and counterproductive policies have only deepened,” says Pelosi, a statement that makes no sense unless you accept the absurd premise that the rational regulation of a border is contrary to human rights. In the name of “morality,” she is calling for a government morally indifferent to its own citizens, all for the sake of an ideological experiment no other country on earth is reckless enough to conduct.