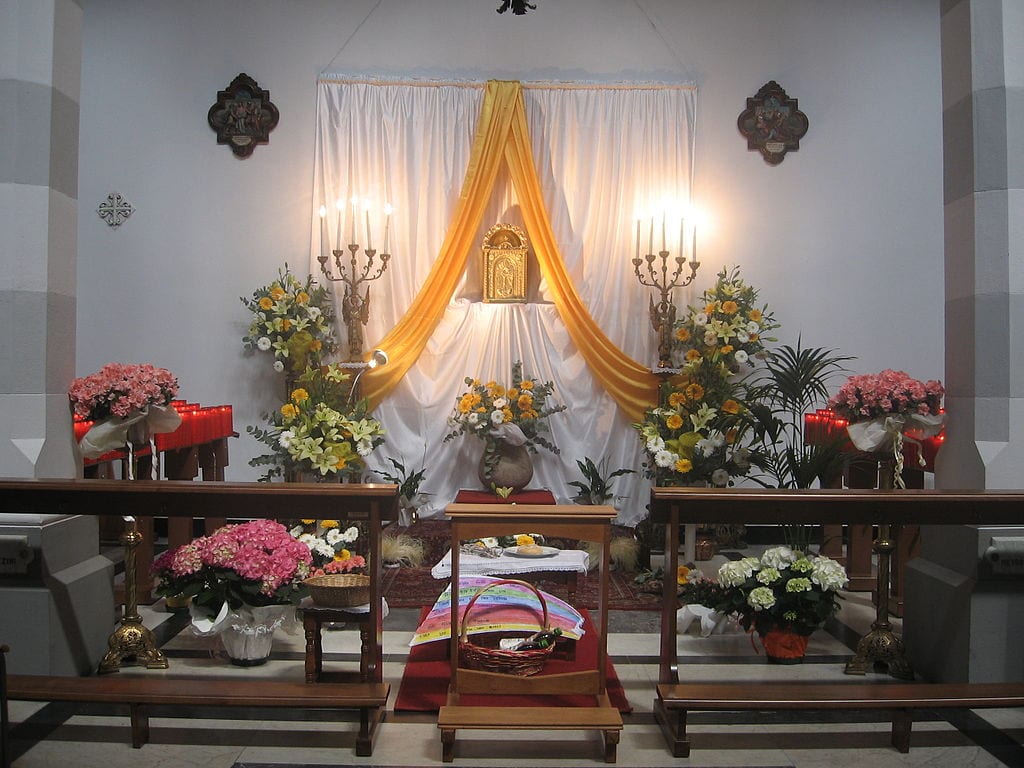 Is there a more unsettling day on the Christian calendar than Palm Sunday? The enduring quietude of Lent suddenly breaks, the somber music gives way to “All Glory, Laud, and Honor,” and we, the agents of Christ’s crucifixion, jubilantly welcome him to the city where he is soon to die, actors caught up in a drama whose ending has already been dictated by history and our own innate sinfulness. The juxtaposition of joy and death is haunting and all too literal in many denominations, where Palm Sunday coincides with Passion Sunday and gospel passages for both are read. “Hosanna!” goes the crowd at ten a.m.; “Give us Barabbas!” fifteen minutes later. In Catholic churches, the priest enters to songful adulation from the parishioners, while the altar’s statues, shrouded in cloth as is Lenten custom, stand in spectral reminder of what is to come.

It is Holy Week, even here in Washington where the pastel vestments have been donned and fastidious preparations made for the sacrament of Bottomless Mimosas Easter Brunch. For those of us who are Christians, this week is characterized by the emotional lurch of Palm Sunday, the foreboding of Maundy Thursday, the horrid realization of Good Friday, the anticipation of Holy Saturday, the euphoria of Easter Sunday. Its observance at the intersection of winter and spring means the weather often coincides with the mood, or at least seems to. I developed an expectation growing up that Good Fridays are always cold and overcast and Easter Sundays are perennially warm and sunny. Rattle off all the temperature data you like, that impression will still linger.

But Holy Week’s manifestation in our lives goes far beyond silly meteorological coincidences. The Ascension elicits creeping doubts, the Beatitudes get consigned to the backwaters of memory, but the narrative of the Passion, with its achingly flawed supporting characters, is urgently relatable. What has Hollywood ever produced that can compare to the vexation of Pontius Pilate, brutal yet tormented, facing down the bleating mob on one side and a man he can’t quite bring himself to condemn on the other? In the Gospel of Luke, Pilate declares that he finds no guilt in Jesus, then punts the problem to Herod, then announces that he’s releasing the prisoner, then appeals to the crowd after they shout him down, then says that he’s “found no cause of death in him,” then — only then, after his extensive pleading has made him more sympathetic than the ostensibly pious religious leaders on his doorstep — does he order the Son of God crucified. In John’s slightly divergent account, Pilate is revealed to be deeply afraid. Who among us wouldn’t be?

“Don’t obsess over Christ’s suffering,” some say. “It’s his teachings that will convert the masses.” Yet the Passion is Christianity at its most human. Man’s quintessential susceptibility to groupthink and the mob both protects Jesus — the Pharisees repeatedly postpone arresting him for fear of the people — and guarantees his crucifixion. Peter, poor Peter, became the rock for Christ’s Church, but only after the cock’s languorous crow. His excruciating imperfection — at one point Jesus castigates him as a “stumbling block” — would be cited by Joseph Cardinal Ratzinger two millennia later as the reason the Church is only a flawed vessel of God, consisting, as did the Twelve, of mere stumbling men. And if Peter wasn’t the ultimate hero, then neither was Judas the consummate villain, ruing his deliverance of Jesus to the authorities and tossing away his silver, only to repair off to the desert and hang himself.

These narratives weigh on us because it’s so easy to superimpose ourselves onto the experiences of the apostles. Confronted by a simmering mob, would we, too, have disowned a friend? Would we have stayed awake for a cryptic religious radical? Even Jesus’s humanity was on full exhibit during the Passion, as he agonized in Gethsemane and later wondered on the cross why he’d been forsaken. It can be easy to forget how dark his story was. Christianity is a religion founded on a repurposed torture implement, and much of the worthwhile literature it inspired — think of the gore-strewn leopards and mysterious ghosts from T.S. Eliot’s “Ash Wednesday” — draws upon some very bleak symbolism.

I remember watching a documentary about Tony Blair some time ago in which an aide recalled discovering a Bible in the former prime minister’s luggage. Presented with this incriminating evidence, Blair confessed to being a Christian, but was quick to aver that he was a private one and thus not liable to be consigned to a mental hospital. I’m slightly exaggerating there and Blair has since become more public about his Christianity, but his initial reticence is the model these days. We’ve made a virtue out of religion being a closed-door matter, if that. Yet for Christians, the humanity of Holy Week makes our faith overlap with the world around us, just as after years of instructing his followers to stay quiet (at least in Mark) Jesus made his triumphant entrance into Jerusalem.

In his poem “The Burden of Itys,” Oscar Wilde writes, “Sing louder yet, why must I still behold / The wan white face of that deserted Christ.” Wilde was then gravitating towards the paganism that would nearly consume him, yet he couldn’t shake that image, that face of that man. During Holy Week who among us can?