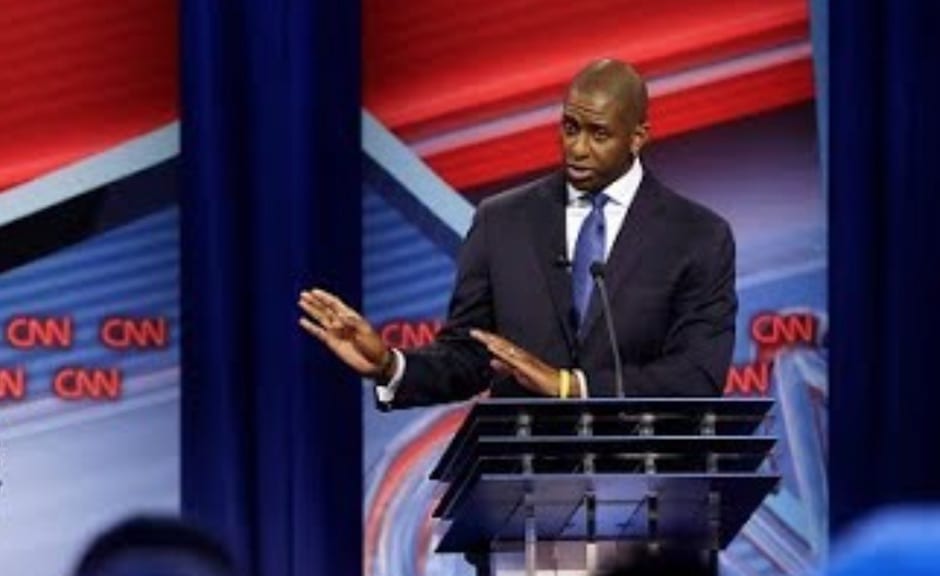 In Port Orange, Florida, near Daytona Beach, one sign in front of a house stands out: “Andrew Gillum for Governor of Massachusetts.” I was told that the jokey owner of the house is an NRA-supporting Democrat, who is upset over Gillum’s support for new restrictions on guns.

Gillum’s debate performance on Wednesday night did nothing to dispel this reputation for far-left kookiness — the kind of pol who glibly signs anti-police pledges and calls for the restoration of voting rights to released murderers.

The format of Wednesday night’s debate was pretty dumb, restricting the candidates to one-minute answers and thirty second rebuttals, which basically means you learn nothing from their comments and have to endure an overbearing moderator who plays time-clock scold the whole night. Whenever any subject even mildly complicated came up, the format rendered any resolution of the matter hopeless and just resulted in a welter of cross-talk.

Gillum is an open huckster and reckless ideologue, and he gives off a strong stench of Tallahassee corruption. But his campaign seems to have stocked the crowd with activists, who applauded his demagoguery wildly. Gillum is on the payroll of George Soros and one suspects so were some members of the audience. (Another billionaire creep, Tom Steyer, has promised Gillum $2 million.) No sooner would Gillum finish one of his hacky answers than members of the audience would whistle and applaud thunderously. It appears that Gillum has the political infrastructure of Florida working for him in a way that the far more unassuming Ron DeSantis doesn’t.

DeSantis isn’t flashy but next to the transparent pomposity, arrogance, and shallowness of Gillum, that should appeal to voters who want a capable and substantive government. DeSantis reminded the audience that he is not a “career politician,” unlike his opponent, who has never held a job outside of low Florida politics. Gillum does little to hide his political contrivances, all the way down to his overly deliberate and coached manner of speaking, which suggests the overcompensation of a crook and unstudied ideologue. His closing statement consisted of Chomsky-style class warfare, something about people getting ahead in the age of Trump by stomping on their neighbor’s necks, which Gillum couldn’t quite deliver with his usual practiced smoothness. The closing statement by DeSantis was at least comprehensible and sober-minded about real problems. If Gillum wins, he will spend most of his term hanging out in the green rooms of CNN and MSNBC. His interest in the meat-and-potatoes of Florida governance is nil.

The corruption that wafts off him puts me in mind of a conversation I once had with the pollster and analyst Charlie Cook about Florida’s capital. “It is the most crooked state capital in the country,” I recall him saying. He said many pols who come out of it are tacky and dirty as hell. (That was one of the reasons why he was suspicious of a Rubio run for president.) That certainly applies to Gillum, who had to admit on Wednesday night he did in fact know that a developer (who turned out to be an undercover FBI agent) gave him a $1,000 ticket for the play Hamilton. Gillum conceded he knew, thereby admitting that he lied at the last debate (where he said that his brother gave him the ticket), then tried desperately to change the subject. Gillum also got a free junket to Costa Rica, and naturally the petty bribery worked, as DeSantis pointed out: the lobbyist behind that trip got a $2 million renovation contract from the city of Tallahassee.

Like most crooked Democrats, Gillum seeks to absolve his own greed by talking about the greed of others. Somehow socialism sanctifies his own avarice in his mind. Gillum reiterated his call for jacking up the corporate tax rate, which would amount to a 40 percent increase, all so that failing public school educrats can get even more state dough. On the bright side, Gillum, should he win, would have to persuade three-fifths of each house to enact the increase, a high bar that he probably wouldn’t reach.

One wonders if Gillum will receive a majority of votes from Northeast transplants in Florida. The press excitedly thinks so. What a grim irony that would be — Bostonians and the like escaping the People’s Republic of Massachusetts only to hand victory to a Soros-Steyer stuffed shirt who will form an even rattier one in Florida.