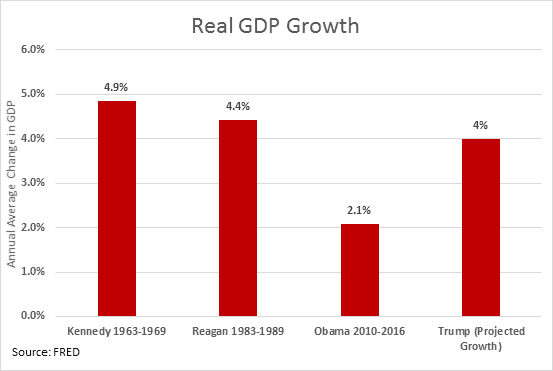 Growth Doves. That’s what I call the liberal economists and political commentators who say that the U.S. can’t achieve 4% growth. It’s a ridiculous claim — disproved by history — but they are clinging to it. The reason is obvious. THEY couldn’t get to anywhere near 4% growth with their Keynesian nonsense so they think nothing can get us there. Actually, the free market can and will. 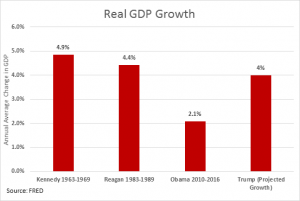 The growth doves are everywhere. CNN Money recently asked leading economists about Trump’s promise and they found a strong consensus that “4% growth is impossible, or at least highly unlikely.” Why? They say there aren’t enough workers with the retirement of the baby boomers and that automation means fewer jobs available. Productivity is apparently tapped out.

Even the latest 3 percent growth goal that Trump’s budget team has projected was ridiculed. ”Experts” point to a widely cited 2016 San Francisco Fed study which argues that the “new normal” is 1.5 to 1.75% GDP growth — or less than half the post-World War II average pace of progress. Economists are sounding as myopic as the legendary patent office official who once proclaimed that everything that will be invented has been invented.

History is on Trump’s side. In the 1960s, after the Kennedy tax cuts were implemented, the economy grew by 4.5 percent annually for about five years (1965-69) while unemployment sank to record lows, and a gold-linked dollar held down inflation.

In the 1980s, following the Reagan tax cut, the economy from 1983-89 expanded at annual clip by 4 percent. (See chart.) Back then economist Paul Samuelson, a Nobel prize winner, declared that if the Reagan agenda were to produce high growth in outcome and jobs with declining inflation it would be “a miracle.” The miracle happened. So why not now?

It’s worth noting that when Barack Obama unveiled his Keynesian stimulus plans, the White House projected 3% plus rates of growth nearly every year. He never hit 3% growth in a single year. I don’t recall hearing the hoots of protest against his plans achieving “impossible” rates of growth.

One bogus argument for the new normal of slow growth is that the labor force growth necessary for high growth will not happen. It is true that baby boomers are retiring at a pace of 10,000 a day. But the notion that there isn’t an available pool of workers to fill millions of new jobs from the tax cuts and deregulation is nonsense. There are a record 95 million Americans over the age of 65 out of the workforce today and a record low labor force participation rate.

Yes, many of these workers are over the age of 65 and retired. But the biggest reduction in workforce participation has been younger people. Meanwhile many workers over the age of 50 have seen their jobs disappear and have resigned themselves to early retirement. We know that including the millions of Americans who have given up looking for work or can’t find a full-time job means an unemployment rate twice as high as officially reported.

We also know there are millions of Americans on disability or other welfare programs who aren’t working. This isn’t because there are more disabled people or that more people need government benefits like food stamps. It is because the benefits are so much easier to get and thus welfare and disability have become costly substitutes for work. Put time limits and work requirements on these programs for employable adults and the labor force will accelerate quickly.

There are potentially tens of millions of workers who could and should be working, but aren’t. Also, we can and should fix our immigration system so many more engineers, scientists, and skilled workers can get visas to come to the U.S. and fill open jobs.

Then there is the issue of productivity. Federal Reserve vice chair Stanley Fischer declared last year that slow growth in “capital investment and productivity” is the force that’s “holding down growth.” No they aren’t. Investment has been low for the past decade because of liberal policies that punished capital investment. Higher capital gains and dividend taxes, more onerous regulations, Obamacare, Dodd-Frank, the massive increase in the national debt all have deterred investment. The war against business under Obama hopefully will become a peace treaty with business under Trump. We know that there are hundreds of energy projects ready to go — these are investments — that Trump should greenlight in the months ahead.

I’m of the belief that America is just entering a new stage of massive productivity gains as we enter the Digital Age Part Two. Artificial intelligence and robotics could double or triple the productivity of American manufacturing. New drugs, vaccines, medical devices, artificial limbs, and medical procedures from our biotech industry will cure or alleviate cancer, heart disease, MS, Alzheimer’s, and many other debilitating illnesses that sap productivity.

We are entering a golden age of productivity with undreamed of advances. We will produce more and more output with fewer and fewer workers needed.

We get there mostly by getting the government out of the way. Trump wants to do that. And if he does, 4% growth can and should be the new normal in America. And the growth doves will eat their words!