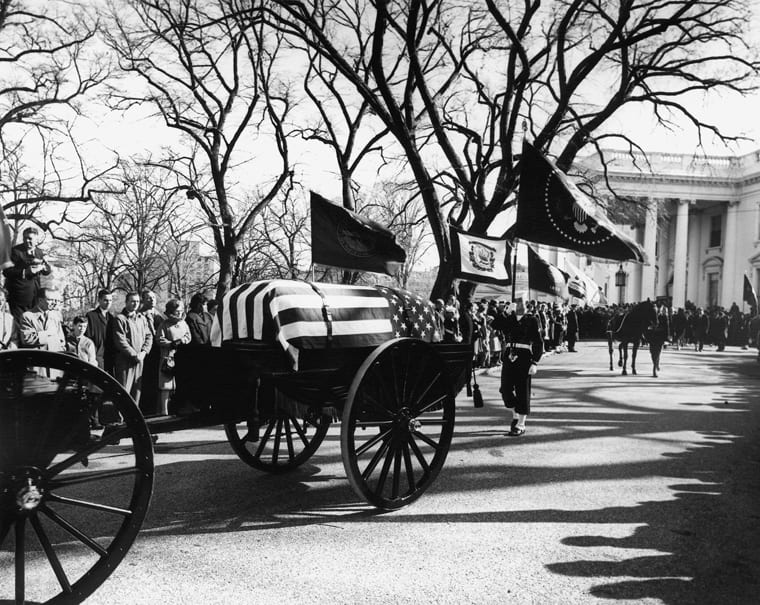 When I was 4 years old, I clearly remember watching on our family TV as the flag-draped casket rolled along, accompanied by a military honor guard. It was November 1963 and television was still black-and-white, and I was too young to understand why my mother was crying.

We were Democrats, of course. My parents had grown up on farms in Randolph County, Alabama, during the Great Depression and, though my brothers and I were raised in respectable middle-class comfort in the Atlanta suburbs, we were never permitted to forget where our folks came from. Ancestral memory was passed along to us as a sort of inheritance, and part of that legacy was a fierce loyalty to the Democratic Party. Dad was a union man, a member of the International Association of Machinists, Lodge 709, which represented workers at the Lockheed aircraft plant in Marietta that employed not only my father, but also many other working-class men in Lithia Springs. The Marietta plant (now Lockheed-Martin) was a major defense installation — Dad worked on the C-130 line, supplying the Air Force with that legendary workhorse of a cargo plane — and just as my family were Democrats, we were also proud patriots. Dad was a former Army sergeant who in 1944 had been wounded by shrapnel while serving in a forward reconnaissance unit in France, and his job at the Lockheed plant was, in a way, a continuation of his service to our nation’s defense.

We were Democrats, as I say, and the assassination of President John F. Kennedy when I was just a toddler was not only the occasion of emotional pain for my family, but it was also a crucial turning point in America’s political history. Over the next decade, our nation would be torn by unprecedented upheavals — race riots, anti-war protests, “sexual liberation,” an epidemic of illegal drug use, etc. — which so damaged the fabric of America’s society that, by the time I started high school, the country was quite nearly demoralized.

Everything changed so suddenly and so drastically that Americans in 1973 were confused and frustrated and almost desperate to restore the social equilibrium and shared sense of national purpose that the Great Disruption destroyed. Perhaps that explains why, by the early 1970s, movies and music and even fashion were in a nostalgic mood. Pop singers scored hits with remakes of tunes that had first been hits 10 or 20 years earlier; movies revisited the Depression (Paper Moon) and the bygone era of doo-wop and ducktail haircuts (American Graffiti); and stylish young men in 1973 were wearing suits with wide lapels inspired by films like The Godfather. The Emmy award for outstanding drama series in 1973 went to The Waltons, which depicted the life of a Depression-era family in rural Virginia, while the most popular TV comedy was All in the Family, starring Carroll O’Connor as the irascible working-class guy who proudly supported Nixon and didn’t care much for the opinions of the peacenik hippie son-in-law he called “Meathead.”

What happened to America? That was a question often asked during the decade between JFK’s assassination and 1973, a year that marked not only the withdrawal of U.S. combat troops from Vietnam, but also the beginning of the end of Richard Nixon’s presidency in the Watergate scandal. The events of the Great Disruption — everything from the Beatles’ 1964 arrival in America to the emergence of radical feminism in the so-called “Women’s Liberation Movement” — have been endlessly recounted and analyzed by historians. That revolutionary decade has had an impact on our political culture which continues to this day.

Donald Trump is from the same New York borough (Queens) that was Archie Bunker’s home in All in the Family, and Trump was elected in large measure because his patriotic “America First” sensibilities and take-no-crap attitude resonated with working-class voters who long felt neglected by Washington politicians. And what about the young left-wingers splattering their hashtags — #Resist and #Antifa and #BlackLivesMatter — all over social media? Aren’t they the spiritual heirs of hippies like “Meathead”? (Played by Rob Reiner, evidently a Method actor who over the past four decades has gone from playing a stereotype on TV to being a stereotype of a clueless Hollywood liberal.) Nowadays, the patriotic Americans who Nixon called “The Silent Majority” are speaking up everywhere — on talk-radio and Fox News, in podcasts and YouTube videos, on Facebook and Twitter — and their voices are being heard in Congress and in the White House. Meanwhile, the Democrat Party to which my family gave its fierce loyalty for so many decades has become something my parents wouldn’t understand.

Democrats are now a carnival sideshow of identity-politics groups, who seem to care more about the “rights” of kooks and criminals (including foreigners who illegal sneaked across our borders) than they do about American workers. The real leadership of the Democratic Party is not to be found in Washington, D.C., but rather in the Manhattan offices of network TV news operations, in Hollywood movie studios, and in the faculty lounges of prestigious universities. It is the whims and fancies of this cultural elite (whose worldview Thomas Sowell analyzed in The Vision of the Anointed) which effectively control the Democrats’ agenda in the 21st century. This, too, is a legacy of the Great Disruption, the decade when radicals took over the Democrat Party, which abandoned the patriotic idealism of JFK’s “New Frontier” to embrace the anti-American resentments of the New Left.

None of this could have been imagined before November 1963. The reason Kennedy went to Dallas, after all, was that Texas Democrats had become concerned about the GOP making inroads in the Lone Star State. It must be remembered that JFK had just barely edged out Nixon in the 1960 election and, while Democrats still held a firm congressional majority (with 262 House seats to a mere 176 for Republicans), the GOP had gained three Senate seats in the 1962 midterms, as well as four House seats — one of which was in Texas. Republican Ed Foreman had won a seat in West Texas where the incumbent Democrat congressman was tainted by the Billy Sol Estes scandal, which was directly linked to JFK’s vice president, Lyndon Johnson. The man who rode in JFK’s limo through the streets of Dallas that November day in 1963, Gov. John Connally, had been elected the previous year with less than 55 percent of the vote. This was cause for alarm among Texas Democrats, who were still reeling from Republican John Tower capturing Johnson’s former Senate seat in 1961 — the first Republican to win a statewide election in Texas since Reconstruction. Connally’s challenger in the 1962 gubernatorial election, Jack Cox, had done better than any previous GOP candidate for that office, in a year when Foreman’s election to Congress was termed a “breakthrough” for Texas Republicans. If JFK hoped to be re-elected in 1964, he couldn’t take Texas for granted.

The social, cultural, and political forces that would bring about the Great Disruption had been held at bay during the decade preceding that fatal November afternoon in Dallas. The presidency of Dwight Eisenhower, who had commanded U.S. forces in World War II, is rightly remembered as a Golden Age of American peace and prosperity. Eisenhower was not an ideologue, and many conservatives (including William F. Buckley Jr.) were dismayed by the Republican president’s “go along to get along” attitude toward the Democrat majority in Congress. Ike’s moderation did, however, have the beneficial effect of soothing the political nerves of a nation that had suffered too much “excitement” — the Depression and the New Deal, a four-year war against Hitler and Tojo, the emergence of the Cold War against Soviet Communism, the McCarthy era, and the Korean War. Ike made peace in Korea and presided over an era of social stability and economic growth at home, and handed off to his successor an America as strong as at any time in its history. Kennedy took office in a time of remarkable optimism, but the seeds of the Great Disruption had already been sown.

None of this, of course, was comprehensible to a 4-year-old in November 1963, wondering why his mother was crying about that flag-draped casket on our black-and-white TV. Nor do I think my own children understand how those events so long ago have shaped the country they live in. The way history is taught in our schools leaves most young people with almost zero knowledge of the Cold War era, when America fought what JFK called “a long twilight struggle” against the greatest evil mankind had ever known. Communism killed an estimated 100 million people during the 20th century, and that wicked totalitarian ideology would have killed many more, had it not been for America’s role as leader of the free world.

The Great Disruption was perhaps not, as some of my right-wing friends might say, the result of a Communist conspiracy, but it was the anti-American forces of the radical Left who played a pivotal role in the decade of upheaval that began when an assassin aimed his rifle at the president’s motorcade rolling through Dealey Plaza. That bullet not only killed a man, it also ultimately proved fatal to an idea, a liberalism that was idealistic, but also pragmatic and patriotic.

Less than five years after President Kennedy’s death, the Democratic National Convention spawned a riot in the streets of Chicago, and the failures of liberalism helped Nixon win the White House. The Left’s hatred of Nixon (and his own paranoia about America’s subversive enemies) led to Watergate and, well, here we are today, with a Republican president battling hostile forces intent on destroying him. We have inherited the legacy of the Great Disruption, but how many Americans today actually understand what happened during that era, and why? Not enough, and if we don’t study history, we may be doomed to repeat it.

Robert Stacy McCain
Follow Their Stories:
View More
Robert Stacy McCain is the author of Sex Trouble: Essays on Radical Feminism and the War Against Human Nature. He blogs at TheOtherMcCain.com.
Most Popular
1
Hither and Yon
CNN Wants You to Know That Recession Declarations Are Racist
by Scott McKay