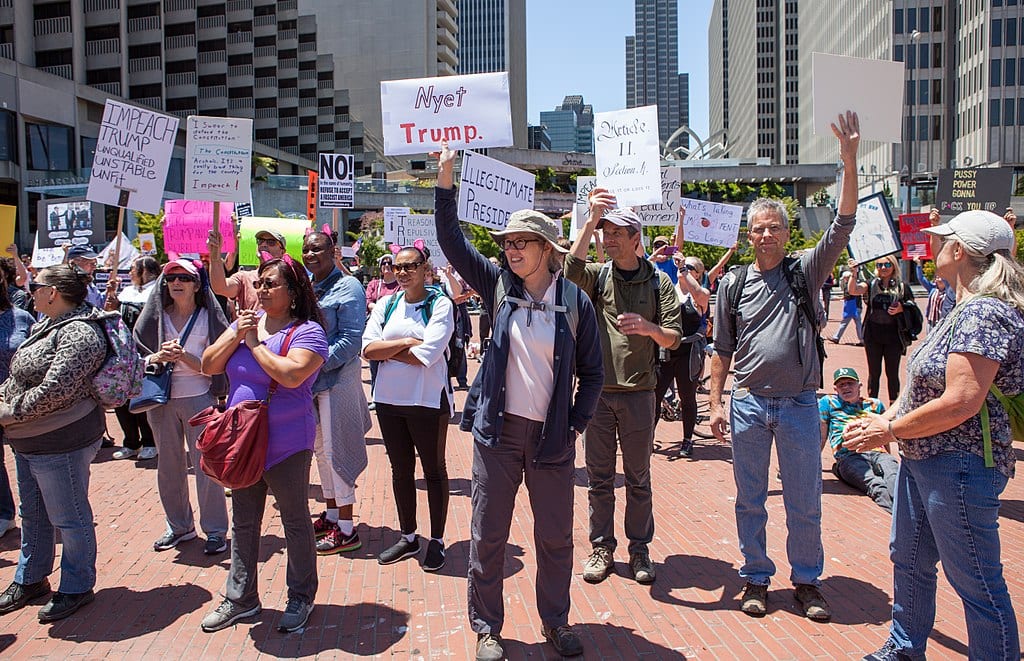 All right, then, impeachment — a matter resting on the national dining table in plain view. Who wants to cut into and serve it?

Rep. Maxine Waters does. “What more do (Democrats) need to prove?” she inquires in the aftermath of the Mueller report’s release. The value of impeachment, a double-edged weapon — no less likely to cut the wielder than the victim, the purpose of a national row louder and more divisive than we’ve been in for decades — here’s what needs proving, it seems to me. We have some ways to go here.

Notice the progression of moves when it comes to impeachment.

First, the House of Representatives, controlled by Waters’ party, draws up and introduces articles of impeachment. The real fun begins here. Battle over the articles commences, Democrats accusing Donald Trump of Lord-knows-what all by the time the cannonading commences, Republicans answering in kind.

Then the call for a vote. All in favor! All opposed! Either the thing passes or it doesn’t. If it doesn’t (due to Democratic defections from the Waters enterprise), the Democrats gain nothing from the whole circus. They’ll have wasted their own time as well as the nation’s.

Say it does pass, consequently winding up before the Republican-controlled Senate, which has (I wouldn’t say “enjoys”) the constitutional power of making the final decision — to convict or not convict.

How would we reckon the chances of conviction and removal of the president, after a Senate debate of boiling intensity, marked by mud-slinging both on the pro-Trump and the anti-Trump side? I myself would put the chances at something like minus-25. This is notwithstanding the anti-Trumpian virulence of Mitt Romney — lusting, perhaps, for the redemptive opportunity of another go at winning the White House. Who can truly tell?

Then, in any event, where are we? What are we trying to do here? Clean up the presidency — only a few months before the constitutionally scheduled election of 2020? When the voters can make their own choice — Trump or Biden or Harris? Even O’Rourke, Castro or Buttigieg? — it couldn’t be, could it, that the proponents of impeachment just desire to smear some egg on Republican faces?

In that event, or in any other event that intersects the impeachment brouhaha, we would have to ask how America comes out on top in this thing. Is the president’s personal behavior any less edifying than that of Bill Clinton the last time we went through this regurgitating exercise?

The substantive worth of such a controversy as Waters desires to engage us in is, I would venture, marginal. The Mueller report sweeps aside imputations of disloyalty and possible treason based on supposed collaboration with the Russians in 2016.

From the pile of accusations about Trumpian rants and rages over “witch hunts” staged by “fake news” outlets, and the resistance put up by White House staffers to potentially damaging presidential initiatives, no really damning details emerge — just more evidence that Donald J. Trump is a piece of work; more self-promoter than crook; nobody’s model of Aristotelian virtue; in some sense, a man for his time and place; a not unreasonable representative of a public not noticeably in love with Aristotelian virtue and the Higher View of Life.

Indeed, it strikes me, after two years of teeth-gritting over various doings in the Oval Office, that Trump is a caricature of us: of those who jointly and severally put him in office, whether we voted for or against him. This on account of how, purposefully or not, we shaped these present, loose-jointed times — loosening norms, ditching standards. Trump could not have beaten FDR. He could not have beaten Harry Truman, John F. Kennedy, or even Jimmy Carter. He beat Hillary Clinton. Q.E.D.

Whether we impeach Trump or scratch around for a Washington or Adams to put in his place — a doubtful enterprise, it must be said — is obviously a question of import. It’s one I would be hard put to assign to congresspeople who resemble Trump more than they either suspect or fear.