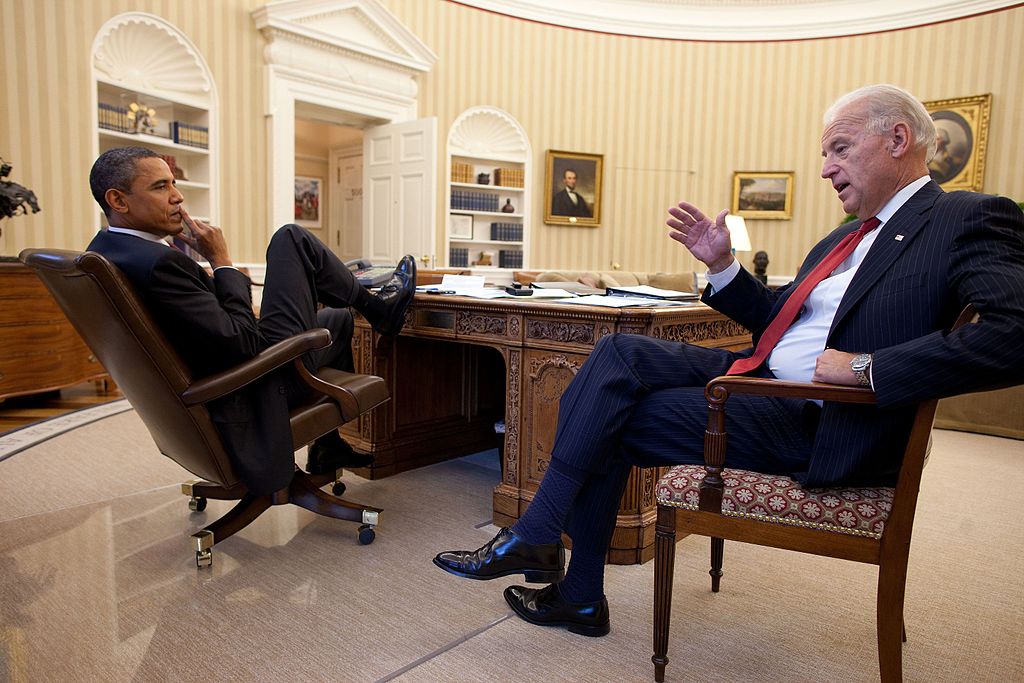 Seventy former national security officials who had served in past Republican administrations have written a letter and taken out a full-page ad in the Wall Street Journal to declare that President Trump is “dangerously unfit” to serve a second term and that Democrat Joe Biden would be better to trust with our defense and foreign relationships.

These men and women are a small part of the Republican and neocon establishment. They are denizens of the Washington “swamp” but among them are well-respected men such as former NSA director Gen. Michael Hayden and former director of national intelligence John Negroponte. I have known a few of them.

They are so consumed by their disdain for Trump that they overlook Biden’s miserable record.

Their charges against Trump — and conclusion in Biden’s favor — have gone unanswered. I served as an Air Force officer and, later, a deputy undersecretary of defense under Bush 41. Because I know that there is no rational basis to conclude that Joe Biden would be better for our national security than Donald Trump, I feel obligated to defend Trump from the accusations of the Gang of 70.

The letter makes ten arguments to show Trump is a danger to national security, some of which are spot-on. Among them are charges that Trump has alienated our allies and made them disrespectful of us, that he cozied up to dictators and failed to stand up for American values. It goes much further to say that Trump has mismanaged our national security and dishonored the presidency.

Their principal beef with Trump, scattered among several of the points in the letter, is that Trump has offended our NATO allies, aligned himself with our enemies (such as China’s Xi Jinping and North Korea’s Kim Jong Un), and lost the respect of world leaders who, they contend, “view him as unreliable, unstable, and unworthy of respect.” They conclude that Trump has gravely damaged America’s role as a world leader.

Trump has often shocked the national security community by making statements praising the Chinese President Xi Jinping and his regime, saying that he and Kim Jong Un had fallen “in love,” and constantly cozying up to Russian autocrat Vladimir Putin. His unwillingness to criticize Putin, Xi and Kim strengthens them and weakens us. It is extremely unwise and damaging.

What the G-70 letter writers ignore is that Trump’s approaches to China and North Korea have resulted in none of the bad deals that earlier presidents — notably Bill Clinton — made with nations such as North Korea. Trump’s proclaiming that he and Kim were in love was dumb, but it’s a long way from making a deal relieving North Korea of economic sanctions, as Clinton did, without extracting from North Korea any benefit to our national security in return.

Trump has been ham-fisted in his approach to NATO, but his criticisms of the NATO nations are generally correct. The richest nations of NATO — France and Germany in particular — have, for decades, refused to invest in their own defense. Trump’s leadership, such as it is, comes in the form of chastisement. It does generate resentment but it is beginning to succeed. Germany has — in minuscule terms — increased its defense expenditures in response to Trump’s demands.

The group’s letter goes on and on, bashing Trump for things such as interfering in the military justice system and mismanaging national security by firing people — according to the letter — because they didn’t cover up his misdeeds or weren’t sufficiently loyal.

Trump did interfere with the military justice system twice to correct obvious miscarriages of justice. It was the right thing to do and was clearly within the power of the president.

Just what “misdeeds” is Trump guilty of that the fired people supposedly didn’t cover up? Virtually everything Trump does is exposed by leaks, attacked by the media, and investigated by Congress. Firing people such as Rex Tillerson, James Comey, Jim Mattis, John Bolton, and others was not mismanagement of our national security.

Trump is no Reagan. And, sure, I’d rather be voting for one of the several real conservatives I can think of, but they’re not on the ballot: the choice is Trump or Biden. I voted for Donald Trump in 2016 and I’m going to do so again this year despite his faults and because the facts show clearly that Joe Biden would be far, far worse for our national security.

The G-70 prefers Biden to Trump. That’s their privilege, but they’re dead bang wrong. They are so consumed by their disdain for Trump that they overlook Biden’s miserable record.

Joe Biden has been in government for nearly fifty years. His track record was summarized perfectly in 2019 by Robert Gates who had served as Obama’s first secretary of defense. After praising Biden’s character, Gates said, “I think he’s been wrong on nearly every major foreign policy and national security issue over the past four decades.”

In 2009, as vice president, Biden cheered Obama’s Cairo speech in which Obama divorced America from reality, saying it was his job as president to defend Islam against stereotypes and that no nation had the right to decide whether others — meaning Iran — can have nuclear weapons. Biden made no objection to Obama’s statements or the anti-Israel policies that flowed after them.

During the Reagan era, we had a mechanism called “Defense Guidance” that annually compared what our military had in its tool box to the threats we faced and made sure the tools matched the threats. During the Obama era, Biden stood by, cheering Obama, when Obama slashed military spending by $600 billion (over ten years) in complete disregard of the threats our military is supposed to be able to deter or defeat.

In his half-century in government, Biden has never sought to coax our allies into investing more in their own defenses so that they can help us defend them. If he is elected, the deadbeats of NATO will relax. Biden will be glad to restore their favorable opinion of us by enabling their anti-defense policies.

The worst of Obama’s actions — the signing of his nuclear weapons deal with Iran — was another disaster that Biden cheered enthusiastically. The deal barred U.S. and UN inspectors from Iran’s key nuclear sites, which made the deal unverifiable. Any nuclear weapons deal that cannot prove the Iranians’ compliance is too obviously dangerous to sign, but Obama did and Biden applauded.

One of Biden’s signature accomplishments was to advise Obama against undertaking the Navy SEALs’ raid into Abbottabad, Pakistan, that resulted in the killing of Osama bin Laden. Biden has since claimed that he didn’t give Obama that advice, but it’s clear that he did.

Biden, in a retreat with other Democrats in January 2012, said that before deciding to go ahead with the raid, Obama went around the group assembled in the situation room, asking each person for their opinion. According to what Biden told those Democrats, his answer was, “We owe the man a direct answer. Mr. President, my suggestion is, don’t go. We have to do two more things to see if he’s there.” Fortunately, Obama ignored his advice.

Biden knew of, and at some level participated in, Obama’s FBI and CIA operations against Trump and his 2016 campaign. We know that from facts such as the meeting Biden attended when he suggested that the Logan Act be used to prosecute Gen. Mike Flynn, Trump’s incoming national security advisor.

It’s also clear that Obama used Hillary Clinton’s unsecured email system to communicate with her on various secret matters. Biden either was included in those conversations or wasn’t trusted enough to do so. Either choice is a condemnation of his trustworthiness to deal with our most closely-held defense and intelligence secrets.

There are a lot of other items in Biden’s track record of failures that prove his inability to get national security and foreign policy right. Those are merely the lowlights.

And what can we expect from Biden? More of the same and worse.

The Democrats’ 2020 platform promises to keep our military unmatched in the world. But what will they do with it? The DNC platform is a recipe for appeasement.

The 2020 DNC platform promises to use force “only when necessary to protect national security and when the objective is clear and achievable.” Reread that sentence and focus on the “and.” Joe Biden and the rest of the Dems will impose their subjective judgment on whether our military objectives are achievable in order to fail to act. In terms of Biden’s political agenda, that is a bar against the use of military power to protect our nation and our allies.

At least in passing, we should note that the “achievability” test for military action would be, if it were imposed, a breach of the mutual defense obligation we have under the NATO Treaty. The G-70 takes no notice of that.

It’s irrational to conclude, as the G-70 does, that Joe Biden would be a better choice on the basis of national security and foreign policy. Despite his many faults, Trump is the better choice.