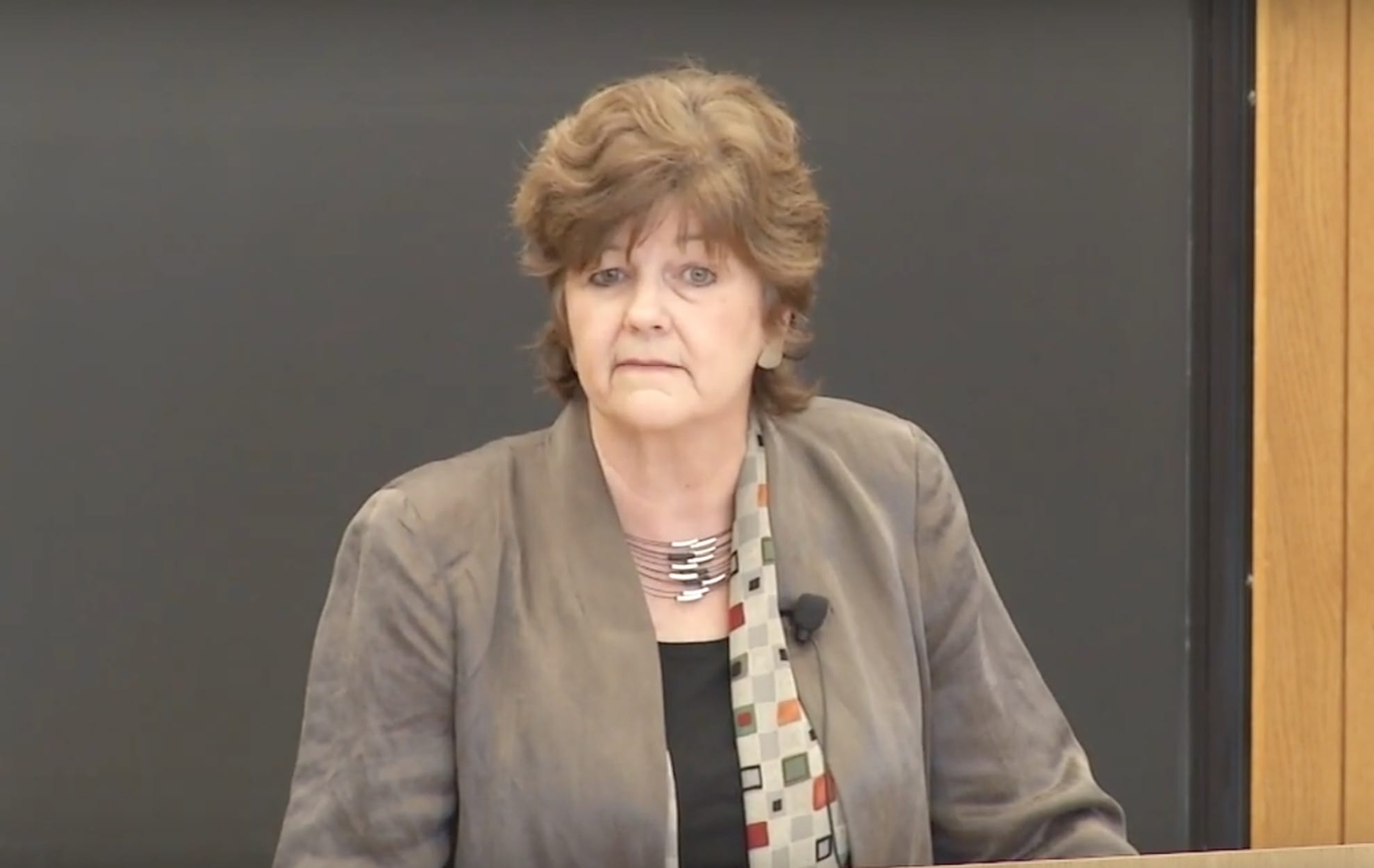 Duke historian Nancy MacLean made waves in 2017 with her book Democracy in Chains, a fantastical conspiracy drama that recasts James Buchanan, winner of the 1986 Nobel Prize in economics, as a crypto-segregationist bent on undermining American democracy. The problem, of course, is that MacLean’s book is not a gripping mystery novel, but instead holds itself out as a work of serious history.

That its central claims have been thoroughly and widely debunked has not stopped MacLean from doubling and tripling down on the book’s most outlandish flights of paranoid fancy. Nothing as mundane as the factual record is capable of penetrating MacLean’s prefabricated narrative about libertarians and our movement.

Put aside for a moment MacLean’s repulsive, ignorant insult of people with autism — in which she stated that libertarians “seem to be on the autism spectrum” in the course of disparaging libertarians for their alleged lack of “solidarity or empathy.” We are apparently meant to take it on MacLean’s word that autistic folks are, as she says, “you know — people who don’t feel solidarity or empathy with others.” Others have dealt sufficiently with MacLean’s ridiculous and insensitive remark.

Beyond her hopelessly unfounded reading of libertarian thought, which bears no resemblance to the ideas actually espoused by historical libertarians, MacLean would seem to have a rather warped idea of what solidarity and empathy entail. If MacLean had bothered to engage and attempt to genuinely understand the libertarian literature, she would know that libertarians oppose most government action not because we are unempathetic or feel disconnected from our fellow man; quite to the contrary, it is because we oppose the use of physical compulsion or duress to accomplish social goals, to violate the inalienable rights of individuals. Any libertarian opposition to government action is therefore just a specific case of our more general resistance to violence against free and equal people.

And it’s important to stress the equal piece of the equation. For libertarians, the moral, political, and legal equality of all individuals means interfering with another’s legitimate sphere of freedom must be forbidden. Philosopher Roderick Long calls this idea “equality in authority,” which implies that no one has a right to subordinate or subject another to his will. Libertarians are simply consistent in our application of this principle, having noticed that politicians, bureaucrats, judges, and policemen are — fancy titles and uniforms notwithstanding—mere human beings like the rest of us. It turns out, then, that libertarians take empathy and solidarity quite seriously, unwilling to treat other people, however remote or anonymous, as mere means to their ends.

But I will do Professor MacLean the courtesy of reading her confused hatred of libertarians and our ideas as charitably as I can: MacLean, like so many well-intentioned progressives, wrongly conflates the state with community or society itself, surmising that those who criticize government social programs, desire a smaller, more limited government, or worry about government overreach in general simply reject social solidarity as a principle. We oppose those programs because we are greedy, callous money-hoarders who just want lower taxes and couldn’t care less about the great unwashed masses. This is simply not so.

Several unspoken assumptions are built into MacLean’s book and her view of libertarianism, assumptions that lead her to read libertarianism uncharitably and unfairly. MacLean confuses the particular means she favors, state action, with certain desired ends: meaningful aid to the poor, a robust social safety net, and, perhaps more abstractly, goals like equality, social justice, and solidarity. Libertarians, broadly speaking, share the ends but disagree that empirically state action and programs best serve them, arguing that instead government has historically been the enemy of society’s poor and the marginalized.

When government intervenes, it frequently does so on behalf of the powerful and privileged, tipping the scales in favor of the connected, making life more difficult and expensive for the rest of us. Had MacLean troubled herself to study the ideas of real libertarians, she might have learned that early or proto-libertarians (for example, Adam Smith, Thomas Hodgskin, Richard Cobden, Charles Dunoyer, William Leggett, Benjamin Tucker) saw their freedom philosophy as a plea for the common man, as a principled argument for open competition against the abuses and excesses of a legally protected mercantile elite.

Public choice theory, the idea for which Buchanan is famous, says that we should be careful with the exercise of political power, that those who wield it are no less subject to incentives, no less motivated by self-interest. Unlike the rest of us, however, they enjoy the special prerogative to employ the coercive power of the state, which creates a precarious situation: If progressives like MacLean believe that the rich and powerful (and their sycophantic apologists, libertarians) lack the incentives or are otherwise too selfish to help others, what does she imagine government will do with its unique monopoly on the use of force? Whom does she imagine it will serve?

Indeed, radical laissez faire liberals pioneered class theory and analysis as we know it, fulminating against the collusive dealings of economic special interests and government ministers. Corporate power as we know it — the real target of so much of MacLean’s hostility (again, reading charitably) — was an invention of the modern state. Today’s libertarians follow their classical liberal progenitors in principled criticism of big business for being on the corporate welfare dole, unfaithful to stated free-market principles. Of course, none of this can be communicated to one who has closed her mind to good-faith conversation about ideas, which should be the goal of professional academics like MacLean.

Professor MacLean is a model of what not to do in confronting the ideas of those you perceive as intellectual foes. Reading malicious intent into your opponent’s argument weakens yours by taking your eye off the ball, preventing you from tackling the “steel man” (as opposed to “straw man”) version of his views. We can’t ever really know what’s going on in someone else’s head; it is therefore best to deal with actions and the artifacts and evidence those actions leave behind. Had MacLean considered those more carefully, she couldn’t possibly have come up with such an imaginative smear of James Buchanan.

Democracy in Chains is a bad book, MacLean’s mischaracterizations of James Buchanan and the liberty movement are shameful and lacking in scholarly rigor and integrity, and her remarks about people with autism were ugly and careless. Nevertheless, I doubt very much that Nancy MacLean is a bad person; we shouldn’t make the mistake she does, of seeing the political opposition as evil and motivated by a secret desire to destroy the country, which is very rarely the case. Most people are sincerely in their desire to get at truth and advance justice — best to take on what they actually say, not what you imagine them to be thinking.

David S. D’Amato (think@heartland.org) is an attorney, expert policy advisor at the Future of Freedom Foundation and The Heartland Institute, and a columnist at the Cato Institute’s Libertarianism.org.