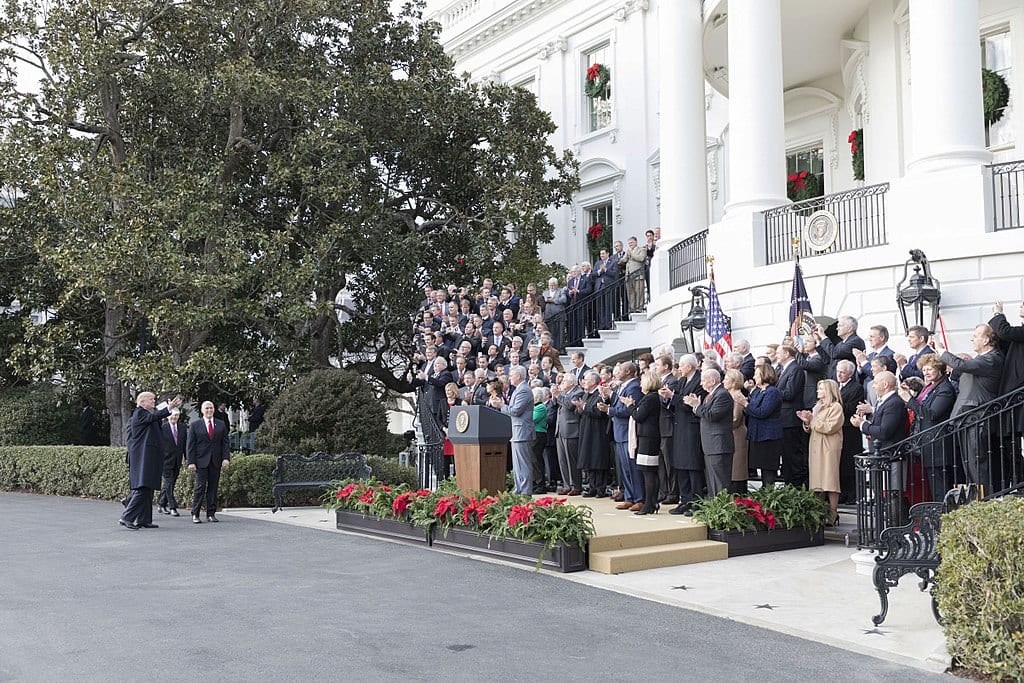 I did not support Donald Trump for president. I recall arguing with some of my pro-Trump Consumer Technology Association (CTA) board members in 2016 — smart business leaders who were convinced that as president, Trump would drive U.S. economic growth. I was skeptical and focused on Trump’s personal, divisive attacks.

But within hours of Trump winning the election and the Republicans holding on to the Senate, I went on record saying Trump would grow the economy by “knowing when to step back, cut burdensome rules and let businesses innovate and thrive.” I also believed — correctly — that he would view the stock market as a “real-time measure of his economic success.” Since then, I have remained bullish, based on a growing global economy and the actionable steps President Trump has taken to make the U.S. economy better.

President Trump’s plan is working. Despite recent stock market volatility, the economy is strong and the stock market has experienced growth. During President Trump’s first year in office, the Dow Jones Industrial Average gained 31 percent and the S&P 500 grew 23 percent. Unemployment is down to 4.1 percent. The number of Americans working full-time has grown to a record 154 million, and we just added 200,000 jobs in January. Consumer confidence is high. Inflation and gas prices remain low.

It is a commonly held belief in Washington that the president gets too much blame and too much credit for the health of the economy. But in this case, I believe President Trump deserves much of the credit for the nation’s economic success. Here’s why:

He set the tone by his words and his hires. President Trump genuinely and effusively welcomes and wants American companies to do well, hire more people, and increase salaries. So, in many cases, he hired business-minded executives to lead agencies. Twenty-four percent of his cabinet members came on board as former CEOs. By comparison, President Obama had none.

Under President Trump, businesses are welcomed as partners in reducing unnecessary barriers to hiring and manufacturing in the U.S. Over the last year, I have been in several meetings with Trump appointees and civil servants — and in every meeting, these officials have struck me as dedicated to the mission of their agency, professional, extremely competent, and respectful in any disagreement. They are also laser-focused on doing things more efficiently and effectively.

I will never forget a mid-2017 meeting with the Environmental Protection Agency’s (EPA) Chief of Operations Henry Darwin, who as Arizona’s Chief of Operations had proven himself by improving almost every state-level operational efficiency in the state. He was intent on applying the same process improvements and efficiencies to the EPA. He even had the support of civil servants in Arizona and at the EPA, all of whom wanted to see operations run better.

Darwin went around the table and asked industry representatives what the government could improve. Everyone agreed they wanted to follow the law while speeding up the permitting process and other functions, without unnecessary manual filings. They wanted easier computer filing, a lack of redundancy, and a more logical time table with fewer steps. After eight years of little interest in how processes could improve, these industry heads acted like they’d just experienced a breath of fresh air, simply because someone was willing to listen to their frustrations.

He’s keeping his promise to cut unnecessary, business-chilling rules. On Jan. 30, 2017, President Trump announced he would require two federal rules be eliminated for every new one proposed. When I testified before the Senate Commerce Committee a few days later, a senator asked my view on this. I said, “When we talk about this form of regulatory sequestration… it is a blunt instrument. On the other hand, it’s going to force a review that is necessary and long overdue of a lot of rules that shouldn’t be on the books.”

President Trump’s plan has relieved companies of the choking bureaucracy that was strangling American business. In 2017, the Trump administration issued only 21 “economically significant” rules, compared to 52 in the first year of the Obama administration. These rule changes matter. Less red tape makes it easier for businesses to invest in their U.S. operations and hire more workers. Since President Trump was elected, more than 20 CTA members have made over 40 announcements involving the creation of 250,000 new American jobs.

He led a successful change in the tax laws to favor U.S. business investment and job creation. Under President Trump’s leadership and with a supportive Republican Congress, our antiquated corporate tax laws were changed for the first time in decades to no longer encourage U.S. companies to invest and hire abroad. The United States went from the highest corporate tax rate in the developed world to among the lowest. And we allowed American companies to repatriate funds for hiring, investment, and shareholder distribution in America, in addition to funding the U.S. Treasury. Apple alone announced it will pay $38 billion in new taxes. More, some 300 companies announced bonuses, raises or retirement account increases as a direct result of the passage of the tax law.

He started a new discussion in corporate boardrooms. President Trump instigated a new dialogue in boardrooms across America about the obligation business leaders have to our country. Some of these discussions began out of fear — no company wanted to be singled out as a bad player by the president. Others came about due to a sense of patriotism. In any case, it’s working. For the first time in years, boardrooms are discussing what it means to be an American company.

To be clear, we still face some challenges. The business community remains concerned about our increasing isolationism, the threatened breakdown of trade agreements and our need to buy and sell globally in order to have a healthy economy. We need to invest in infrastructure for our children. We need immigrants to fuel and start our most innovative companies and we need workers to grow our economy. We have to address our deficits and cut health care costs.

But thanks to President Trump, our economy is surging. More Americans are working. They will gradually be paid more. And American families earning the median family income will keep more of what they make.

Although Washington still has problems to overcome, the economy is roaring. Opponents see it as 1929. I see it as the post-WWII era, when American optimism, innovation, and a can-do spirit led the economy and the world. Our innovation economy is producing so many life-changing breakthroughs, and our business climate is so healthy that our growth could break four percent in 2018.

President Trump is not perfect. I can and will challenge him on many issues, but his economic leadership is real. And he deserves much of the credit for the economic momentum we are enjoying.

Together, let’s celebrate these wins, and look for ways to work together to realize their full potential.