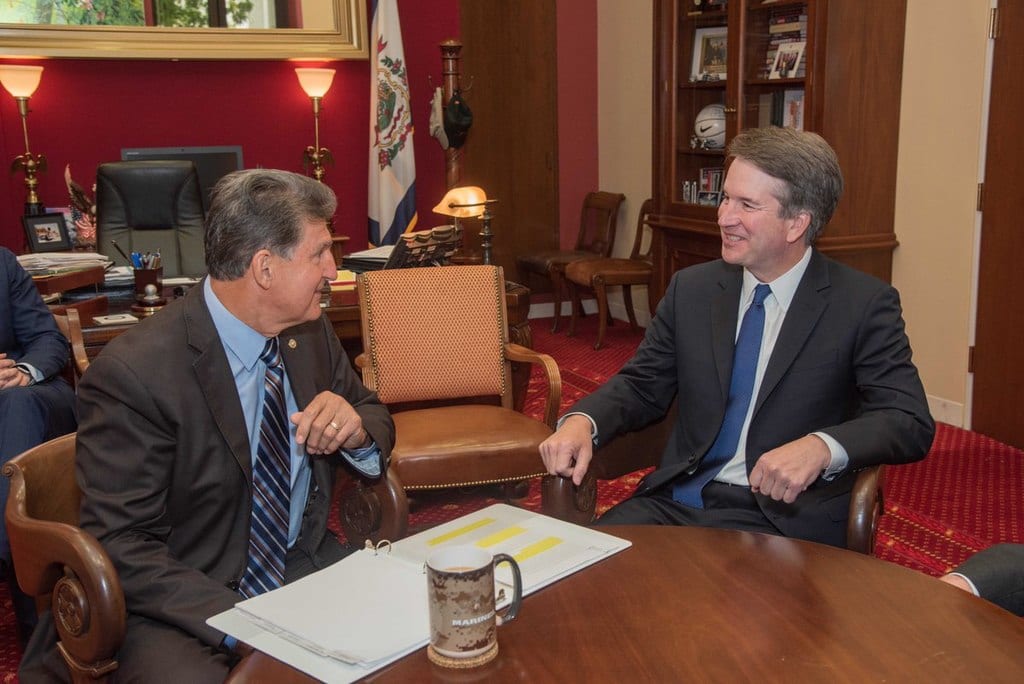 Thursday’s Christine Ford-Brett Kavanaugh Senate spectacle was great for cable news ratings, if perhaps not so good for any chance of ending the increasing polarization of the American people.

What’s becoming clear is that the Christine Ford allegations, and the follow-on accusations of sexual misconduct against the Supreme Court nominee even less credible than those of Ford, is Thursday’s spectacle and the media frenzy around the smear campaign against Kavanaugh is anything but good for the Democrat Party.

You may see polls showing Kavanaugh isn’t a particularly popular Supreme Court nominee. You might see legacy media reports indicating that Kavanaugh is a political problem for Republicans. Take all of that and throw it in the trash, because it’s wishful thinking by partisan Dems in newsrooms.

Here’s what’s real: to have any chance of capturing the Senate in the midterms, the Democrats have to hold on to better than a half-dozen seats in states President Trump carried in 2016. And in all of those states, the Kavanaugh nomination is going to be a major negative for those incumbent Democrat senators.

Regardless of how they vote.

Let’s say you’re Joe Manchin in West Virginia. What you needed was for this nomination to be uncontroversial, and a sure thing for confirmation. A party-line contested vote the whole country is watching is a nightmare. Why? Because in a red state like the one Manchin represents, the majority will favor confirmation and find it to be a decisive issue in their vote — so Manchin voting against Kavanaugh will set him up to reap the wrath of the voters in a state which went 65 percent for Trump in 2016.

But it’s worse than that for Manchin, because he doesn’t have a good escape from the Kavanaugh confirmation. You’d say his easy way out is to vote yes, except what the Left has done is to so whip up their voters with the Ford allegations and the copycats who followed that Manchin will lose votes from his own side if he votes to confirm the judge.

This isn’t a theory, by the way. It’s what the polls show.

A new poll finds that 58 percent of voters in West Virginia think Brett Kavanaugh should be confirmed to the Supreme Court following his testimony to the Senate Judiciary Committee on Thursday.

The Public Opinion strategies poll commissioned by the Judicial Crisis Network found an overwhelming majority of West Virginians (59 percent) thought Kavanaugh’s testimony was more believable than Christine Blasey Ford, who accused the federal judge of sexually assaulting her more than 35 years ago at a drunken high school party. Those who believe Kavanaugh include 81 percent of Republicans, 43 percent of Democrats and 62 percent of Independent voters.

Manchin is locked in a dead-heat race against Patrick Morrissey, West Virginia’s Attorney General, and his vote is now going to be the defining issue in that race either way.

Manchin’s conundrum isn’t unique. Claire McCaskill in Missouri is already a committed no on Kavanaugh, and her troubles have begun as well…

A new poll released by The Missouri Scout on Saturday shows that Republican challenger Josh Hawley has taken a two-point lead over Sen. Claire McCaskill (D-MO) in the Missouri Senate race just days after she announced she will be voting against the confirmation of Judge Brett Kavanaugh to the Supreme Court.

Hawley leads McCaskill by a margin of 48 percent to 46 percent in the poll conducted by Missouri Scout over two days, from Wednesday, September 26 to Thursday, September 27.

McCaskill announced her opposition to Kavanaugh on September 19. The second day of the poll was conducted on the same day Judge Kavanaugh and Dr. Christine Blasey Ford, who has accused him of attempting to sexually assault her 36 years ago at a time and place she cannot recall and with no corroborating witnesses or evidence, testified before the Senate Judiciary Committee.

Among female respondents, 47 percent said the confirmation process made them less likely to vote for McCaskill, while 42 percent said it made them more likely.

Among male respondents, 50 percent said the confirmation process made them less likely to vote for McCaskill, while 41 percent said it made them more likely.

Among Non-Partisan respondents, 46 percent said the confirmation process made them less likely to vote for McCaskill, while 39 percent said it made them more likely.

Among Republican respondents, 85 percent said the confirmation process made them less likely to vote for McCaskill, while 8 percent said it made them more likely.

Among Democrat respondents, 82 percent said the confirmation process made them more likely to vote for McCaskill, while 8 percent said it made them less likely.

Also, a new poll commissioned by NBC North Dakota News showed the race between Democrat incumbent Heidi Heitkamp and Republican challenger Kevin Cramer has the latter with a commanding 51-41 lead. That poll has the Kavanaugh nomination as the most important (with 21 percent) of nine named issues in the race, with 60 percent of North Dakota voters polled saying they support the judge’s confirmation against only 27 percent opposed. Heitkamp has publicly called herself a “no” vote, which amounts to more or less a surrender in the race. Without North Dakota, there is only a minuscule chance of the Democrats winning control of the Senate.

We don’t yet have polling on the handful of other races which will surely show similar circumstances — like the races in Florida, Indiana, and Montana, all of which are essential dead heats based on the most recent polling — but you can bet on it showing something similar. Even in New Jersey, which is a bit of a different animal since it’s more of a blue state and the Democrat incumbent Bob Menendez has corruption issues outside of the Kavanaugh nomination, the Democrats are in major trouble; the latest poll there has Menendez with a minuscule 45-43 lead over Republican challenger Bob Hugin. If Kavanaugh’s confirmation was a dispositive issue there, Menendez would certainly be in better shape.

Do you think it’s a coincidence that Joe Donnelly, the endangered Democrat incumbent in Indiana, moved from a “no” to a “maybe” over the weekend?

And if there’s a drip-drip-drip of news showing that Ford’s allegation was a lie or that the Democrats have been behaving in ways more unbecoming of their offices than usual — something which has already started — it’s going to have a corrosive effect on the Democrats in the midterms.

For example, it doesn’t look good that Ford’s contention that the alleged Kavanaugh assault first came up in couples therapy in 2012, during which she said a major issue between her and her husband was the installation of a second front door during a remodel of their home. The problem with that statement is the remodel was contracted and permitted in 2008, and certainly completed no later than 2011 — it’s difficult to believe something a year old would have been such a concern in 2012.

Not to mention the Senate isn’t finished with this business of Ford’s lawyers, who told the Judiciary Committee Thursday they were working on a pro bono basis. The lawyers, Hillary Clinton pal and Democrat activist Debra Katz and former Obama functionary Michael Bromwich, who first came into the public’s notice as the bureaucrat who imposed an unnecessary and economically-devastating drilling moratorium in the Gulf of Mexico following the Deepwater Horizon accident, apparently never informed Ford that the committee was willing to travel to California to take her testimony privately; something which points toward an orchestration of a media circus around the allegations. That’s going to be one issue likely to arise this week as Republican Senators begin demanding investigations about the conduct of Katz and Bromwich.

Another will be the question of who leaked Ford’s confidential letter to Feinstein. The California Senator, who as the ranking Democrat member of the committee is chiefly responsible for the disorderly mess that is the Ford allegations because she sat on the letter detailing them for six weeks until Kavanaugh’s confirmation hearings were over. It seems fairly clear that it was Feinstein’s staff who leaked the letter, though she stridently denies the charge.

Staffers in the office of a different California Democrat also risk generating a voter backlash. That would be just after the “doxxing” of Republican Senators Lindsey Graham, Mike Lee and Orrin Hatch, including the disclosure of addresses and cell phone numbers, from an IP address inside the office of Rep. Maxine Waters. The rather rude attempt at intimidation occurred while the Ford-Kavanaugh testimony was happening Thursday, and it’s apparently not the first time that IP address has been associated with such conduct. We surely haven’t heard the end of this one.

Any one of those threads could, if pulled on hard enough, create a vote-mobilizing mess just in time for the midterms. And the above is anything but an exhaustive list.

This isn’t the way for a red-state Democrat to survive an angry right-leaning electorate. By turning up the heat on Kavanaugh, it might well be that they’re cooking themselves.