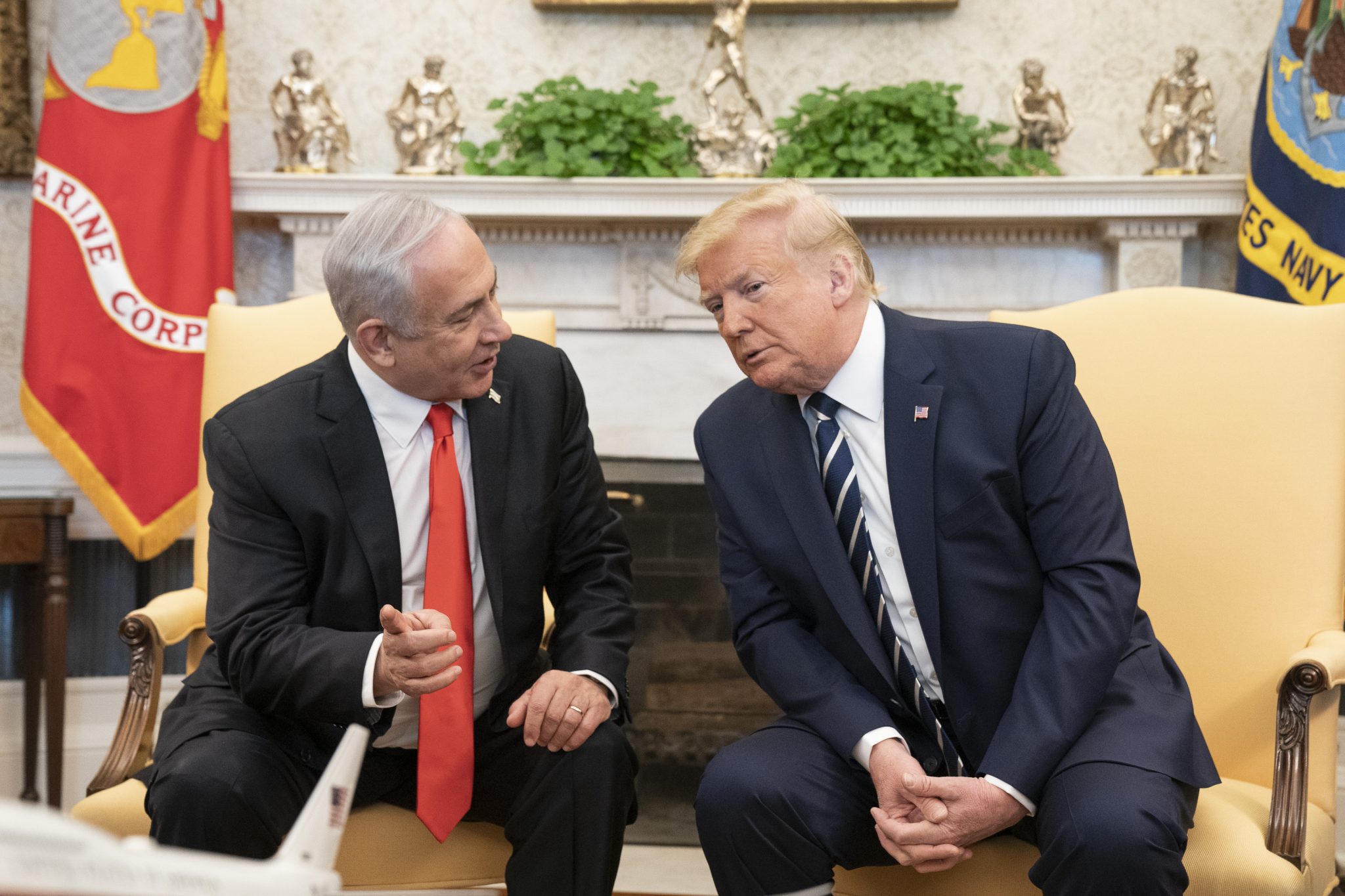 Trending
To Fully Comprehend Trump, an Insight Into the Jargon of NYC’s Outer Boroughs
by Dov Fischer
Mayor Pete: Red Diaper Baby
by Paul Kengor
A Trump–Bernie Brawl Would Benefit the Nation
by David Catron
Sign Up to receive Our Latest Updates!
Register
Hot Off
The Press
Sunday Report
The Pope’s Misdirection Plays
by George Neumayr
Another Perspective
The End of the Democratic German Revolution
by Doug Bandow

In his own typically understated modest way, President Trump calls his newly released Mideast peace plan the “Deal of the Century.” To me, the “Deal of the Century” is whatever it takes to get Hunter Biden, Joe Biden, the pseudo-“whistleblower,” and Adam Schiff sworn under oath and publicly cross-examined by Ted Cruz, Pat Cipollone, and Ken Starr on national television.

For anyone committed to the indivisibility of the Land of Israel, the proposal is a non-starter. For Americans wondering why we need to help create yet another Arab terror center in the Mideast that reliably will vote against us in every United Nations forum, and that will become yet another magnet for Iranians to smuggle in weapons and to train anti-Western terrorists, the proposal likewise is a non-starter. Beyond those ideological and philosophical concerns, the practical reality of “peacemaking” with Arab Muslims in Judea and Samaria for nearly 30 years, dating back to the Oslo Accords of 1993–95, makes any new “Palestine” country unacceptable. They always make promises that they do not intend to honor, and the third-party countries that “guarantee” to enforce the agreement terms always recoil from stepping in later to enforce the long trail of breached promises. Even so, on the other side of the negotiating table, no “Palestinian” representative will accept any compromise on one inch of Jewish land that the Arab population claims for themselves in Judea and Samaria. Their entire national narrative is that there never was a Jewish Holy Temple in Jerusalem nor a Jewish presence in the Holy Land.

When Israeli Knesset (Parliament) member Avigdor Liberman previously proposed the novel idea that the Arabs should allow Israel to annex the Jewish communities of Judea and Samaria in return for Israel ceding to the Arabs equivalent land masses in the Galilee “Triangle” of Israel, where Arabs predominate demographically, the Palestinians immediately shot it down. When Ehud Barak, Israel’s most-incompetent-ever prime minister, akin to Jimmy Carter, flew to Washington to meet with President Bill Clinton and Yasser Arafat and offered Arafat almost every inch of land that the“Palestinians” demand, Arafat responded by launching an Intifada rather than compromise on a single dunam. Hamas, whose very raison d’être is to engage in armed conflict with Israel, will not agree to be demilitarized. The notion defies reality. As for “Palestinians” adopting freedoms and civil liberties, and sticking to it even for four years, or even for four months, consider Abu Mazen (“Mahmoud Abbas”), the president of the Palestine Authority, who now is in the 15th year of the four-year term to which he was elected in January 2005.

Even if the Palestinians were to proceed with a charade of “accepting” the plan and “promising” to demilitarize, recent history teaches concretely that they never will honor their word — because they never have before. In Oslo, for example, they promised to stop educating their children to incitement. Theoretically, there would be peace today in the Mideast if Arafat and Abu Mazen had honored that pledge at Oslo to teach their children about peace and how to live alongside Israel in mutual harmony. Instead, they emerged from Oslo and doubled down on teaching hate — from school textbooks to children’s television shows to kids’ summer camps. They actually intensified their hate training after getting what they wanted at the negotiating table. Israel was removed from maps. Children’s songs about jihad terrorism, idolizing shahid terrorists, dominated school curricula. Since Oslo, they have reared two new generations to hate Israel even more than before — even though they “promised” they would stop doing that.

The United States today enjoys warm relations with the Germany that we fought so bitterly during World War II because, once the Nazis were crushed, the Germans promised to reeducate their people to embrace freedom and democracy — and they honored their word. Likewise with America and Japan. Despite Japan’s bombing of Pearl Harbor, the tortures that Americans faced from the Japanese in Corregidor and during the Bataan Death March, the deaths in the battles of Midway, Guadalcanal, Tarawa, Saipan, Iwo Jima, Okinawa, the banzai charges, the kamikaze air attacks, and the atom bombing of Hiroshima and Nagasaki, today America and Japan are very strong friends because the Japanese honored their pledge to educate their new generation to value freedom and the Western alliance.

Israel relied previously on making unilateral dramatic peace gestures to end Arab hostilities, unilaterally leaving South Lebanon under Prime Minister Ehud Barak and likewise giving Gaza to the Arabs under Ariel Sharon. In both cases, the prime ministers assured their skeptics that, if the “Palestinians” broke their promises to lay down weapons and returned to armed violence, Israeli simply would march back in and restore the lands to their status quo ante. But time unfolded and revealed those assurances to be pure Israeli political bluster from bloated former generals Barak and Sharon, who had been away from the front lines of reality for too long. Once land is ceded by Israel, history teaches unalterably that it cannot practicably be restored. Moreover, when Israel left South Lebanon, the United Nations sent in UNIFIL to assure that the local population would not re-arm. In no time, Hezbollah built a war zone.

Hezbollah’s facts on the ground reveal the reality that awaits an Israeli concession of that sort in Judea and Samaria. No “Palestine” entity conceivably could be copacetic with an arrangement that cedes military control within its borders to Israel or that denies it the right to stockpile rockets and missiles, to train terrorists, and to wreak mayhem throughout the world. They also play a terrorism game that, by now, is quite old and worn: Every time one of their terror groups goes through the motions of “civility,” the next day a new terror group arises down the block under a different name to continue where the last one left off. Thus Abu Mazen promises civility, and Hamas emerges. Hamas says it will stop firing rockets into Israel, and Islamic Jihad emerges across the street to fire rockets.

Nor will Donald Trump always be president of America. In time, there will be a new Obama, and that kind of Washington in time will press for changes to the signed deal, forcing Israel to cede military control to the “Palestine” country that supposedly will have forsworn it. That is how history repeatedly has unfolded for Israel, as one American administration’s promises and “bedrock guarantees” fade over time. We saw this comparatively recently, as Israel pleaded unsuccessfully with the Obama White House to honor “Rose Garden” promises made to Prime Minister Sharon by President George W. Bush. Understandably, for all of America’s historic alliance with Israel as the Mideast’s only reliable pro-Western democracy, we Americans really are sick and tired of getting dragged into Mideast messes that are never resolved. Until now, Israel has been a unique ally because we Americans never have been asked to send our armed forces to do Israel’s fighting. When a future Obama or Jimmy Carter forces Israel, contrary to the “Deal of the Century,” to allow the “Palestinians” to start arming and militarizing, and imposes that change onto Israel by promising that American boys will be sent over to die in case (i.e., when) the Arabs violate the new terms, we Americans will get sucked into yet another Mideast mess when that backfires.

History further warns, even outside the Middle East, that demilitarization agreements are transitory as new governments arise. After World War I, the Treaty of Versailles barred Germany from having an air force, armored vehicles, and certain types of naval vessels. In addition, it established a demilitarized zone in the Rhineland. Similarly, the 1922 Washington Naval Treaty, also known as the Five-Power Treaty, aimed to prevent an arms race by limiting naval construction. Twelve years later, the Japanese government gave formal notice that it intended to terminate the treaty. Soon enough there were brutal WWII naval battles at Midway, Guadalcanal, Tarawa, Saipan, Okinawa, and Iwo Jima.

Because the “Deal of the Century” is facially unacceptable to the degree that it contemplates a new country — and stop calling it a “state” — called “Palestine,” the question to be asked is not whether Israel and its strongest American supporters should accept it but whether anyone should even bother torpedoing it anyway inasmuch as the Arab side undoubtedly will shoot it down first.

President Trump has demonstrated himself a remarkably consistent friend of Israel. From recognizing Jerusalem as Israel’s capital to moving the United States embassy there, to recognizing Israeli sovereignty over the Golan Heights, to declaring the Jewish communities of Judea and Samaria as not inherently illegal, to cutting off funding for UNRWA and throwing the PLO out of Washington and pulling America out of the anti-Jewish United Nations Human Rights Council, Trump repeatedly has proven his friendship towards Israel unequivocally. It even is reported now that, with his “Deal of the Century” having been presented formally, he has given Israel a “green light” to begin its implementation by extending Israeli law over the Jordan Valley and the other Jewish communities throughout Judea and Samaria.

Indeed, one may well wonder whether the “Deal of the Century” has been formulated to induce the “Palestinian” leadership to manifest their intransigence, thereby justifying Israel moving ahead with reunification (“annexation”). Under that premise, once the “Palestinian” leadership from Gaza to Ramallah rejects the Trump plan outright, there presumably remains no further obstacle with the Trump White House for Israel to proceed with reunifying the Jewish communities of Judea and Samaria, once and for all. And that massive reunification of Judea and Samaria with the Israeli heartland will be a very big deal indeed. The deal of the century.

Dov Fischer
Follow Their Stories:
View More
Rabbi Dov Fischer, Esq., a high-stakes litigation attorney of more than twenty-five years and an adjunct professor of law of more than fifteen years, is rabbi of Young Israel of Orange County, California. His legal career has included serving as Chief Articles Editor of UCLA Law Review, clerking for the Hon. Danny J. Boggs in the United States Court of Appeals for the Sixth Circuit, and then litigating at three of America’s most prominent law firms: JonesDay, Akin Gump, and Baker & Hostetler. In his rabbinical career, Rabbi Fischer has served several terms on the Executive Committee of the Rabbinical Council of America, is Senior Rabbinic Fellow at the Coalition for Jewish Values, has been Vice President of Zionist Organization of America, and has served on regional boards of the American Jewish Committee, B’nai Brith Hillel, and several others. His writings on contemporary political issues have appeared over the years in the Wall Street Journal, the Los Angeles Times, the Jerusalem Post, National Review, American Greatness, The Weekly Standard, and in Jewish media in American and in Israel. A winner of an American Jurisprudence Award in Professional Legal Ethics, Rabbi Fischer also is the author of two books, including General Sharon’s War Against Time Magazine, which covered the Israeli General’s 1980s landmark libel suit.
A Further Perspective
Trump’s Own Criminal Justice Reform
by Debra J. Saunders
A Further Perspective
Trump’s Mideast Peace Plan: Hebron Spokesman ‘Cautiously Optimistic’
by Steve Postal
America Ripe for Reform
The Path to Ruin Being Blazed by Congress, the President, and the Fed
by Hunt Lawrence and Daniel J. Flynn
A Further Perspective
The Four Lawmen of the Apocalypse
by Debra J. Saunders
Public Depravity
Roger Stone and the Corruption of Justice
by Jeffrey Lord
At Large
Settling the International Hypocrisy on Settlements
by Paul Miller
o
Sign Up to receive Our Latest Updates! Register