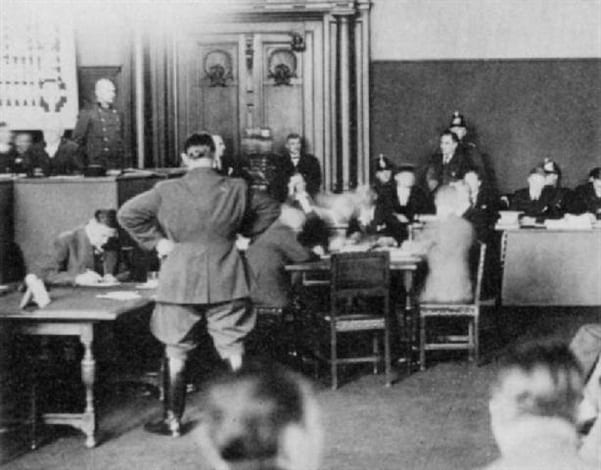 Remember the Reichstag fire? It was perhaps the seminal event that sealed Germany’s fate as a socialist dictatorship before the Allies were finally able to pry that nation out of the jaws of Nazism in 1945 (although for the eastern portion of the country human dignity and freedom wouldn’t come for another 40-plus years thanks to Soviet imperialism).

If you’re not familiar with that event, the date was February 27, 1933. Adolf Hitler had been sworn in as Germany’s chancellor just four weeks hence, though his Nazi party was in an unstable position at the center of a coalition government holding a small plurality of 32 percent of the seats in the Reichstag — Germany’s parliament under its Weimar Republic. At the time Hitler had an agenda in mind to secure a much larger portion of the Reichstag’s seats in order to create a majority for passing an Enabling Act that would allow him essentially to rule by decree, at an election set for March 5.

By happenstance or contrivance on the part of the Nazis — it’s still a matter for debate — a fire was set in the assembly chamber of the Reichstag building which raged until the structure lay largely in ruins. A 25-year-old Dutch communist with a sketchy history as an arsonist named Marius van der Lubbe was found at the scene and charged with the crime, along with four other communists, as the Nazis used the Reichstag fire as evidence of a communist putsch to overflow the Weimar Republic. As a political weapon, the Reichstag fire was incredibly useful to the Nazis — their representation in the Reichstag grew to 44 percent of the body, giving them a majority of 52 percent with allies included, especially when Hitler was able to convince German president Paul von Hindenburg to sign the Reichstag Fire Decree suspending most civil liberties and banning the communists from participating in the country’s parliament.

What we know as the Third Reich followed, and the world was ablaze in war shortly thereafter.

But as a matter of proof there is little to indicate that a communist plot burned the Reichstag. Van der Lubbe alleged he acted alone before being guillotined for the crime, the other communists tried for their accused role in the fire were found not guilty and historical examination since has thrown more suspicion on the Nazis than anyone else for setting the building on fire.

Since then, the Reichstag fire has been the shining example of a “false flag” operation, in which a hoax of some kind is perpetrated in order to inflame public sentiment against parties not guilty of the conduct the hoax is intended to portray.

Which is both instructive and ironic given our current American reality, in which the Left cannot stop slandering its political opponents as Nazis and our president as the second coming of Hitler (which is a long-running gag hardly limited to Donald Trump) — and yet it appears the Nazi false flag tactics are far more prevalent among those who paint the rest of us with such a brush.

Take, for example, the Jussie Smollett affair, which just concluded Wednesday with the D-list actor being charged with felony disorderly conduct for concocting a hoax in which he was supposedly attacked on a Chicago street by a pair of “white supremacists” with “MAGA hats” who abused him terribly. The Smollett accusations were laughable on their face given that on the night in question the weather in Chicago was a bit on the cold side for redneck Trumpers to be out wilding, and surveillance cameras of the alleged scene told a different story from the one Smollett did. But because Smollett is gay and black, the mainstream media hyped his allegations into an indictment of Conservative America as the usual sexist, racist, homophobic rabble — in other words doing the same thing to the Smollett accusations it did to the Covington Catholic kids (which has resulted in Nick Sandmann suing the Washington Post for $250 million, not to mention some 50-odd other media entities), Brett Kavanaugh, and even Donald Trump himself with the Russia allegations.

And there are lots more lesser-known hate-crime hoaxes and other such pure lies directed at those not toeing the leftist line.

The thing to understand about this increasing pattern of malicious fakery and fraud is that the Left knows America isn’t Weimar Germany, as often as our current circumstances are analogized to it. There will be no extraconstitutional seizure of political power in this country. Where the Left has power, and where it’s able to control those who don’t agree with its agenda, is in the culture — the news media, the arts, movies and television, academia. And it’s there where the hoaxes are flourishing. It’s no surprise that the Smollett case went the way it did — it was purely driven by celebrities and the celebrity media, until the political media picked it up.

These abuses of that cultural advantage won’t stop, because the people pushing them believe they work. They’re cultural Reichstag fires. And until the pushback — which may be under way with Sandmann’s suit and Smollett’s criminal charges — begins to overwhelm the hoaxes, the Left will do everything it can to exploit them.