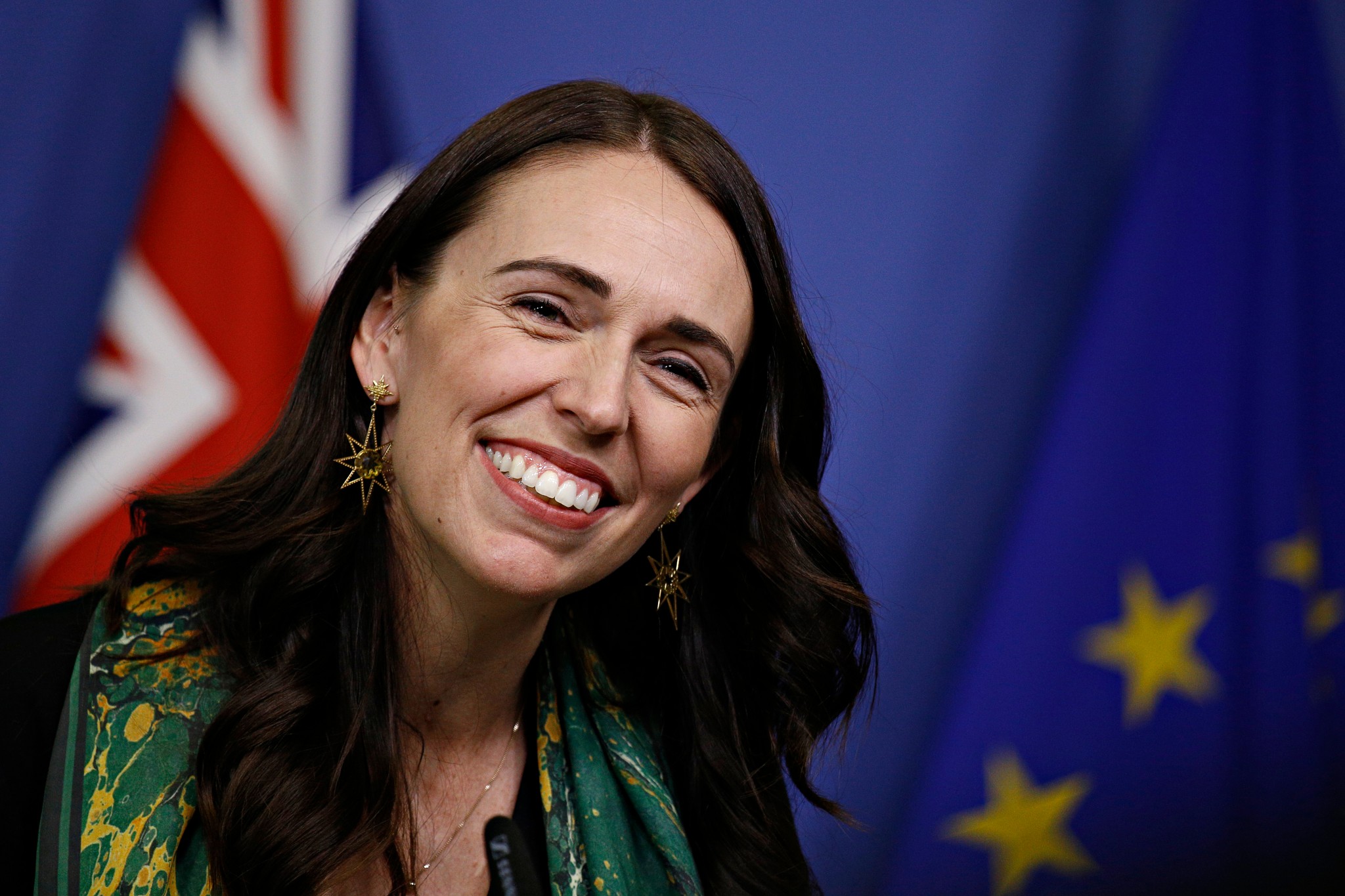 Boy, there sure is an awful lot of discrediting news for the Branch Covidian crowd lately, isn’t there?

Sure seems like they put us through two years of hell for — if not nothing, then certainly not much.

We can start in New Zealand, where the abject idiot Karen in charge of the country essentially pulled an Emily Litella after destroying its economy and trampling all over the civil liberties of the people, only to … shrug her shoulders and mumble about individual choices.

After discriminating and terrorizing her nation for not doing what she wanted them to do, the Prime Minster of New Zealand FINALLY drops all "health" mandates

This is the point where everyone should be asking themselves, what was the point of all of this!? pic.twitter.com/dVhtnqc3jx

Jacinda Ardern is a classic neocommunist control freak who formerly obsessed about climate change until COVID came along — and then she closed off travel to New Zealand and put the whole country on lockdown. She’s in a relationship with a TV presenter which produced a child before a marriage (the wedding was postponed because of COVID, of course), and — shockingly — she was reelected in 2020 in a landslide thanks to fawning media coverage.

And after two years of dictatorial government, she just lifted all the mask and vaccine mandates and said it’s up to the people. This after forcing vaccines on the whole country (something which happened right after a call with Bill and Melinda Gates). Oh, well.

Ardern ought to be run out of office on a rail. Will New Zealanders do that?

What else have we seen lately? Well, there was this…

A new pre-print study by nine health experts from Harvard, Johns Hopkins, and other top universities found that COVID-19 boosters administered to young adults cause 18 to 98 serious adverse events for each COVID hospitalization prevented.

The study—posted Monday on The Social Science Research Network (SSRN)—concluded that mandatory booster vaccination in college is “ethically unjustifiable.” The paper is titled, “COVID-19 Vaccine Boosters for Young Adults: A Risk-Benefit Assessment and Five Ethical Arguments against Mandates at Universities.”

“Per COVID-19 hospitalization prevented in previously uninfected young adults, we anticipate 18 to 98 serious adverse events, including 1.7 to 3.0 booster-associated myocarditis cases in males, and 1,373 to 3,234 cases of grade ≥3 reactogenicity which interferes with daily activities,” the study stated.

The researchers estimated that “approximately 22,000 to 30,000 previous uninfected young adults ages 18–29 years must be boosted with an mRNA vaccine to prevent one Covid-19 hospitalization,” and argued that the risk of serious side effects is much higher.

This ought to be very bad news for a whole lot of politicians who’ve demanded vaccinations for kids. A perfect example of one who should be made to pay a terrible price for his COVID insanity is Louisiana Gov. John Bel Edwards, who, despite being told no on school vax mandates by the Louisiana Legislature, pressed ahead until the politics of his vax fixation became impossible.

The damage done to those kids whose parents listened to people like Edwards is already beginning to manifest itself. The question is whether that story will be told.

Public health officials are encouraging all American adults to receive COVID-19 booster shots due to the emergence of the omicron variant. Meanwhile, children are still receiving their first doses of the vaccine.

But online, some claim children face more risk from the vaccine than COVID-19 itself.

“HUGE: CDC and Big Pharma Data Confirm that More Children will Die from COVID Vaccine than from the COVID Virus,” reads a Nov. 21 headline from the Gateway Pundit, a conservative website that has repeatedly shared misinformation about COVID-19.

The article accumulated more than 3,500 shares within two days. Similar claims have also been shared in standalone posts on Facebook.

As evidence for its claim, the Gateway Pundit cites an Oct. 31 Substack newsletter from Toby Rogers, who also writes for the anti-vaccine organization Children’s Health Defense. The newsletter claims “the Biden administration plan would kill 5,248 children via Pfizer mRNA shots.”

USA TODAY previously rated False a claim that children are 50 times more likely to die from the COVID-19 vaccine than the virus. This claim is similarly wrong.

Public health officials say the vaccine from Pfizer-BioNTech is safe and effective at preventing COVID-19 in children ages 5-11. As other independent fact-checking organizations have reported, the benefits of the vaccine outweigh its known and potential risks.

Maybe the folks at Gateway Pundit ought to reach out to Daniel Funke, the USA Today hack who wrote that “fact check” piece, and ask him for comment.

There’s more, obviously. We could fill a library with the nonstop idiocies of the Biden administration with respect to COVID. Its response is an unmitigated failure on every level — Biden has overseen many more COVID deaths than did his predecessor despite trampling on civil liberties at every turn.

In one example, there was a court case heard en banc at the Fifth Circuit Court of Appeals Tuesday which went very badly for the administration. Feds for Medical Freedom, an organization of about 6,000 federal workers formed to fight Biden’s vax mandate as a term of their employment, has been in litigation with the administration for nearly a year, winning at the district level in front of a Texas judge but losing the government’s appear to a three-judge panel at the Fifth Circuit.

But at the en banc hearing there were fireworks. Forgive the long excerpt, but it’s just too good not to include all of this…

Some of the court’s jurists appeared skeptical in Tuesday’s hearing of Justice Department attorney Charles Scarborough’s arguments the mandate is well within Biden’s authority as chief of the federal workforce, akin to the numerous CEOs of private companies who required their employees to get inoculated against Covid-19.

U.S. Circuit Judge Rhesa Barksdale asked Scarborough if the case is moot because getting vaccines is not ironclad protection against catching Covid.

“Even when you’re vaccinated you still have breakthrough cases of Covid. It’s well known this is happening. So it would be moot and this case would be over. Or at least it should be something we should consider in the factors of whether an injunction is justified,” the George H. W. Bush appointee said.

Expressing confusion at Barksdale’s suggestion, Scarborough said, “The case is not moot. The vaccination requirement continues. And vaccination continues to be the single best method for preventing serious disease from Covid and hospitalization.”

U.S. Circuit Judge Edith Jones, a Ronald Reagan appointee, framed her opposition to the mandate with a hypothetical.

“What is the likelihood the president would declare that all the employees have to achieve a certain body weight within the next six months?” she asked.

“I think the likelihood of that is extraordinarily small, your honor,” Scarborough replied.

“Well, but everybody knows obesity is one of the biggest problems in the United States,” Jones said, “related to many collateral health problems and death. And that the daily consequences of obesity also affect the workplace in terms of medical costs, absenteeism and that sort of thing.”

“So it seems to me that obesity is at least as big a problem,” she added. “And it’s not transmissible. Whereas people who take the vaccine, as you just acknowledged, can still transmit the disease.”

Then there’s the recent study showing a 92 percent success rate for ivermectin in preventing COVID hospitalizations, which popped recently. Meaning almost all of the crisis these people put their constituents through was unnecessary. Imagine how this would have gone if common antivirals had been made readily available to the public to treat COVID, and then monoclonal antibodies made ready as a second line of defense for the people hydroxychloroquine and ivermectin didn’t work for.

But as bad as things have been in the Western world, and as unjust as it may be that some of the worst actors won’t be tossed out in disgrace for their alarmism, stupidity, and tyranny, the man needing a reckoning more than anyone else is none other than China’s fascist dictator Xi Jinping.

Yes, I’m calling him a fascist. China calls itself a communist country but it’s far more properly termed a fascist one where the state controls the means of production by running a corporatist tyranny. And that tyranny manifests itself most flamboyantly in the mass COVID lockdowns which are taking place even at this late date.

Residents under Covid lockdowns in areas across China are complaining of shortages of food and essential items.

Tens of millions of people in at least 30 regions have been ordered to stay at home under partial or full lockdowns.

“It’s been 15 days, we are out of flour, rice, eggs. From days ago, we run out of milk for kids,” said one resident in western Xinjiang.

Authorities are scrambling to contain local outbreaks ahead of the Communist party’s congress in October.

China’s zero-Covid policy requires strict lockdowns – even if just a handful of cases are reported. On Monday China recorded 949 new Covid cases across the entire country.

The policy has prompted rare public dissent from citizens and has also been accused of stifling economic growth.

In Xinjiang a weeks-long lockdown in the Ili Kazakh Autonomous Prefecture near the border with Kazakhstan has seen desperate residents appeal for help on social media.

One post showed a video of an Uyghur man overcome with emotion, saying his three children had not eaten for three days.

Xi comes up for “reelection” at a meeting of China’s Politburo next month. The sycophants and cronies who populate that body wouldn’t dare oust him for what he’s done to his people — from the inception of the crisis to the nonstop lies about it to the privations and misery he’s imposed — but they ought to. Frankly, they ought to do a lot worse than just pack him off to retirement.

We’re far, far overdue for a reckoning on COVID. Across the globe, the ruling class has been exposed as a cabal of idiots, charlatans and despots of various stripes.

The reckoning will come, though. When it does it will be unpleasant. Let’s hope some of it manifests on Nov. 8 in America.