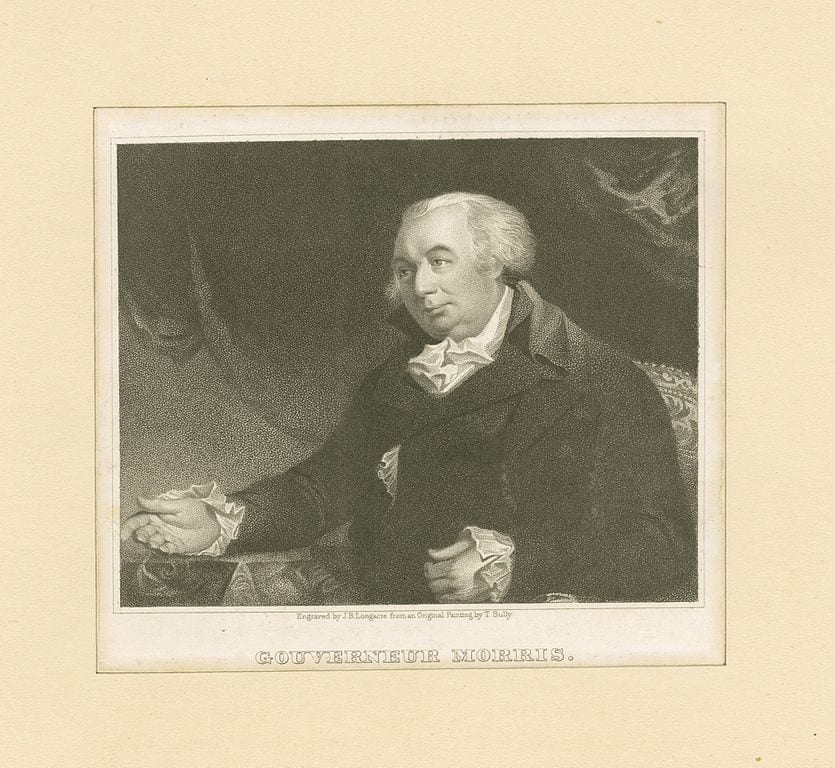 The person most responsible for the Constitution’s final form was Gouverneur Morris. The Preamble, which begins with “We the People,” is one of the world’s most recognizable bits of prose — prose that, at least in some ways, approaches poetry.

Morris had been well educated in poetics. At King’s College (now Columbia University), his two favorite subjects were mathematics and Latin. His Latin studies introduced him to Virgil, Ovid, and other Roman poets, and his writings contain occasional references to Ovid. From studying Shakespeare, Morris learned English prosody as well. As a young man, he sometimes wrote verse himself.

Fortunately, Morris did not essay to render the Constitution in poetry — although at least one modern author has attempted it. Nor is the Preamble technically blank verse. But it certainly was written with meter in mind.

The Preamble can be divided readily into 12 lines grouped into six couplets. I have reproduced them below. The marks beneath each line show how it is scanned. Morris wisely did not try to impose Latin meter on English; his meter is based on the English stress accent.

One can quarrel over the scanning. Pronunciation has changed somewhat since the 18th century, and my daughter Sarah, who draws on far more formal classical training than I, disagrees with me over some details. But the scansion marked below is close enough for present purposes.

Here is the first couplet:

We the People of the United States,

Both lines contain the same number of syllables: ten. Both contain the metrical foot called a molossus, which consists of three heavy syllables (— — —). Poets typically use molossi to convey grandeur.

The couplet is further tied together by alliteration. The “p” sound appears in “People” and “perfect,” and voiced and unvoiced “f” letters appear in “of,” “form,” and “perfect.” The second line also contains a soft, or semi-rhyme, (ORder … fORm). The open sounds of those two words further serve to convey grandeur.

Here is the second couplet:

The meters of these two lines are less similar than the two in the initial couplet, but they are tied together in other ways. Both lines are relatively short compared with those surrounding them. Together, they contain four “s” and two “sh” sounds.

The word “Tranquility” marks the end of both the couplet and of poem’s first third — that is, of its first four lines. “Tranquility” forms a metrical foot called a secundus paeon (. — .  .).

The third couplet is:

These two lines begin with the same syllable: “pro.” Each has the same number of syllables (eight), and their metrical schemes are nearly identical.

Careful readers may observe that this couplet contains one of the few instances in which Morris forgot to capitalize a noun: “defence.”

Here is the fourth couplet:

These two lines share nearly the same number of syllables and a similar metric scheme. Each line features alliteration based on the letter “s.” They end with the near-rhymes “Liberty” and “Posterity.”

Just as “Tranquility” marked the end of the Preamble’s first group of four lines, so “Posterity”—another secundus paeon — signals the end of the second group.

Here is the fifth couplet:

The Preamble can be divided into halves as well as into couplets and thirds. The lines in the middle couplet of the first half (“establish Justice, ensure domestic Tranquility”) are very short. The fifth couplet represents the middle of the second half. Its lines are also very short. In this case, moreover, their metrical schemes are similar.

Finally, we reach the sixth couplet:

I have scanned each line as containing a molossus. Sarah prefers to read my molassi as cretics (— . —). Either way, the Preamble has returned to its initial grandeur. The last word (“America”) is the secundus paeon denoting the end of the last group of four lines.

My book The Original Constitution points out that Gouverneur Morris inserted other cultural signals in the document. But the metric nature of the Preamble is particularly striking. Americans had prepared many state constitutions and constitutional-style papers before 1787, but Morris’ approach was unique and has served as an inspiration for constitution-makers ever since.

Robert G. Natelson (robnatelson.com), a constitutional historian and former constitutional law professor, serves as a senior fellow in constitutional jurisprudence at The Heartland Institute. He is indebted to comments by professor Julia Griffin at Georgia Southern University and Sarah J. Natelson (who share no blame for any of his errors).