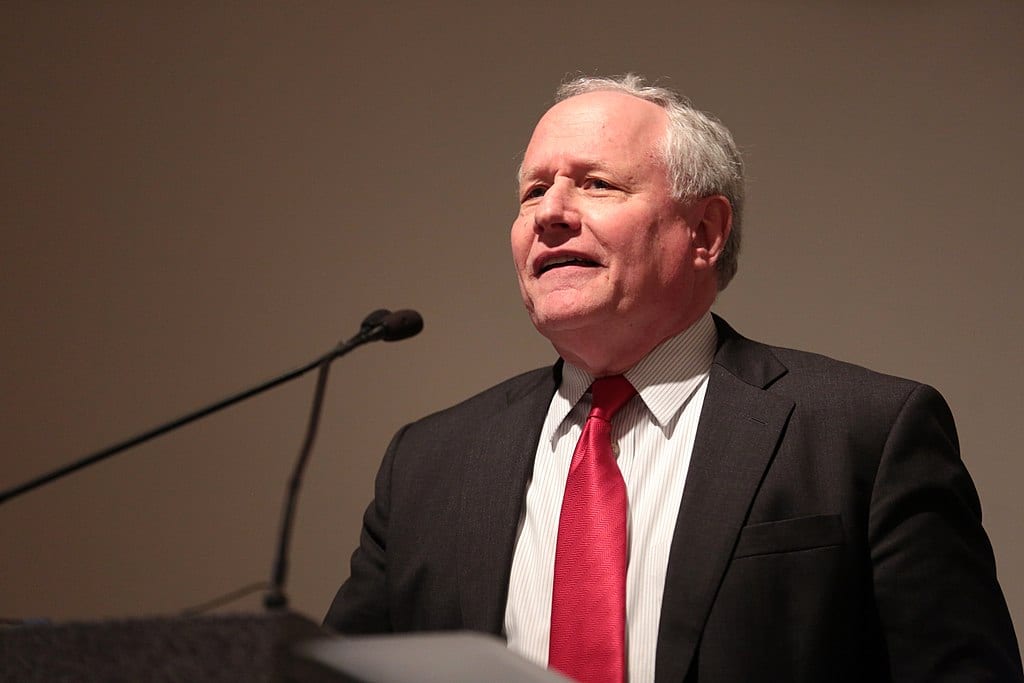 With the installation of Neil Gorsuch to the Supreme Court, and a yet-to-be-named reliable replacement for the unreliable Anthony Kennedy, Donald Trump will have confirmed himself as the most consequential conservative president of the modern era (or a close second to Reagan if you’re nostalgic). This will be complete vindication for Trump supporters, which means it’s really the end for the so-called Never Trump conservatives. Of course, there have been so many humiliating defeats for that crowd that we are spoiled for choice. What was your favorite blunder, or blown prediction, which marked their ignominious end?

For some, it must have been in March when Bill Kristol, longtime editor of the conservative magazine the Weekly Standard, showed up in New Hampshire telling people he would run against President Trump in 2020. Or in April when the conservative website RedState was taken over and purged of writers who were “insufficiently supportive” of the president. Some go back to October 2017 when a Twitter spat broke out between Stephen Hayes and Brit Hume of Fox News over the Weekly Standard’s anti-Trump editorials. With the death last week of Charles Krauthammer, the revered neocon commentator and prominent Trump skeptic, the eclipse of the neocon intellectuals is complete.

One thing’s for sure: it wasn’t really a war so much as a rout. The Never Trump intellectual crowd has no momentum and no popular following these days. Consider the trajectory of their would-be leader Kristol, who appears to be indulging in a personal fantasy by putting himself forward as a candidate, as his rapport with GOP voters includes trying to run Evan McMullin in Utah to throw the 2016 election to Hillary Clinton. When that stunt failed, Kristol personally insulted the pro-Trump writer Michael Anton for his influential essay “The Flight 93 election.” Then Kristol’s commentator gig with Fox was not renewed, and he was soon accusing Tucker Carlson of “ethno-nationalism” and “racism.” Overshadowing all of these breaks was Kristol’s personal history of being the conservative’s answer to Bob Shrum, a political “pro” who was always very wrong about politics.

Of course, Kristol was not alone in his contempt for Trump — he was only the most vocal and unhinged. Alongside him were other conservatives like Jennifer Rubin and George Will and Michael Gerson at the Washington Post; Bret Stephens at the Wall Street Journal; David Brooks and Ross Douthat at the New York Times; Jonah Goldberg and David French at National Review; Ramesh Ponnuru at Bloomberg; and Erick Erickson at RedState. A number of others, people like David Frum and Ana Navarro, committed political seppuku early and endorsed Hillary Clinton. Needless to say, the careers of most of these people have been curtailed dramatically.

What happened? If these intellectuals were so influential in the conservative movement, then why has their apostasy garnered so little attention? A Ramesh Ponnuru editorial in Bloomberg blurted out this truth: “In 2016 we found out that conservative elites didn’t speak for Republican voters.” This split between the party’s base and its donor class (as well as the donor-funded intellectuals) was years in the making, but it became obvious once Trump became the nominee. Then the truth became obvious and damning: the Never Trumpers represented no one but themselves.

Looking back, it now seems self-evident that conservative pundits were preposterously out of touch. (Who isn’t amused by the poindexter pretentiousness of George Will’s bow-ties or the pseudo-scholarly piffle of Jonah Goldberg’s byline as “the inaugural holder of the Asness Chair in Applied Liberty?”). These intellectuals barely noticed the opioid crisis running through small town America; or the base’s anger regarding illegal immigration; and they were adamantly opposed to any restriction of free trade while working class frustrations mounted over NAFTA and its ilk. (This explains why J. D. Vance and his book Hillbilly Elegy was Washington’s must-read book of 2017: it provided a portrait of rural America that the political class could digest without condescending to visit such places or talk to such voters.) It turns out that conservative intellectuals, living inside the “Acela Corridor” and funded exclusively by think tanks and foundations, are poor barometers of Republican voter concerns.

This myopia has several causes. The first is a kind of cultural “capture” that occurs when conservatives live in blue districts and big cities too long. They become, in other words, clueless (RINOS). The second reason is more obvious: many of these people are paid to be openly hostile to Trump’s agenda. The free trade absolutists at AEI and Cato are on salary to oppose any protectionist trade policies. Likewise, hawkish interventionists such as Max Boot knew they had no professional future once Trump’s isolationist instincts became policy.

There is also a low-testosterone, dilettantish strain of conservatism that has overdeveloped in the “mainstream” media to create such sterile hybrids as Michael Gerson and George Will and David Brooks. Nothing sunk these so-called wise men lower in the estimation of their fellow conservatives than their blithe indifference to the Clintons’ gangsterism. While Trump threw wild verbal haymakers at Hillary at campaign rallies, these intellectuals were basically on TV announcing they would be accommodationists for the Clinton Machine’s inevitable victory. Trump’s base was fighting a war; these guys were sipping tea. The contrast in styles of conservatism was stark: it was the pugnacious billionaire against the stuffy wimps.

The greatest disconnect is religious and cultural: the Republican Party is overwhelmingly Caucasian and Christian and traditional on social issues, while its pundits skew Jewish and agnostic and libertarian. Krauthammer wanted to have it both ways, which is not unlike the hedging that Brooks and Goldberg have displayed. George Will went so far as to say: “I’m an atheist. An agnostic is someone who is not sure. I’m pretty sure. I see no evidence of God.” Meanwhile, Gerson is a liberal Episcopalian who took to the pages of the Atlantic to attack evangelicals for supporting Trump. In sum, the conservative intellectuals didn’t understand the base’s concerns about religious liberty because they hardly cared for religion — which should have disqualified them long ago.

The curious uniformity of the Never Trump crowd extends beyond them being heretics who claim to be spokesmen for the Christian base. On every important issue of the election, it was hard to find one of them who could even articulate Trump’s position, let alone support it. Tucker Carlson was one of the few to see this stupidity early and he registered his dissent well in a break-out essay:

Conservative voters are being scolded for supporting a candidate they consider conservative because it would be bad for conservatism? And by the way, the people doing the scolding? They’re the ones who’ve been advocating for open borders, and nation-building in countries whose populations hate us, and trade deals that eliminated jobs while enriching their donors, all while implicitly mocking the base for its worries about abortion and gay marriage and the pace of demographic change. Now they’re telling their voters to shut up and obey, and if they don’t, they’re liberal.

The sad truth was that the Never Trumpers were not safeguarding the ideas of conservatism so much as themselves. Carlson nailed the heart of the matter: “If Trump is leading a populist movement, many of his Republican critics have joined an elitist one. Deriding Trump is an act of class solidarity, visible evidence of refinement and proof that you live nowhere near a Wal-Mart.” That is why the continuing success of the Trump Presidency has been met with escalating anger and vituperation from the Never Trumpers — the news cycle is a daily reminder that they were wrong about everything. Can you be wrong about everything and still be part of the elite?

That is a question being asked in front of many mirrors inside many Washington mansions today. Many people mistook their policy positions for principles, and Trump has made them look foolish. What do they stand for now? What does it mean to be conservative if you’re not clear about what you’re conserving? Credit David Brooks, of all people, with waving the white flag first this April, and with some humility when he admitted that “Part of the problem is that anti-Trumpism has a tendency to be insufferably condescending.” Brooks then basically summarized the great failure of the Never Trumpers as “an epic attempt to offend 40 percent of our fellow citizens by reducing them to psychological inferiors.”

Meanwhile his former comrade, George Will, was not for surrender or appeasement. He had finally found an enemy to relish: his fellow conservatives. One measure of Will’s self-exile was the indifference his most recent column elicited, though it urged Republicans to vote against the GOP at the midterms “for their own good.” Was anyone still listening? It was Will who sagely warned the world mere days before the election: “Until the Republican Party gets right with minorities in this country, it’s never going to win another presidential election.” Not content with that spectacular blunder, Will had doubled down with attacks on Billy Graham and Vice President Mike Pence. The symbolism of such stunts, at least, was clear. As a model conservative, Will stands alone in his own estimation. And what could be more conservative than voting for liberal Democrats?

In that sense, Will’s latest column was merely the fitting coda to a long career of effete snobbery — one that had led him to “leave the party” before it won the White House and march off into the wilderness. (Someday, his columns from the Trump years will be collected and they should be titled: “An Apotheosis of Narcissism.”) He would take his tea and his bow-tie elsewhere. The headmaster of the stuffy wimps would not take part in the victory of the counter-punchers. At last, like so many of his fellow Never Trumpers, he was a pundit without a party and, ultimately, without an audience.