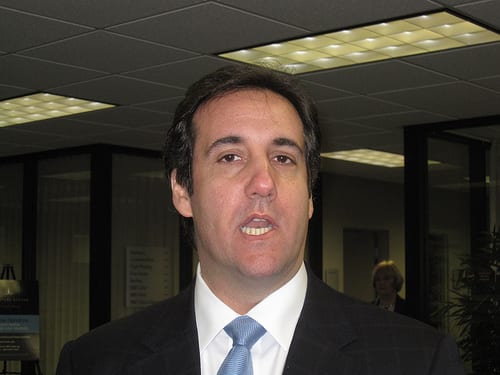 Rumors have circulated for months that what will take Donald Trump down is not anything having to do with collusion with Russia but his business dealings before the election. Trump is compromised by all the deals he swung as a businessman, so the rumors assert. What may have flown under the radar in the private sector will come to light in public service and the scope of the Mueller investigation. Is the raid on Michael Cohen, Trump’s attorney, the beginning of the end for Trump?

The offices of Michael Cohen have been raided, as has his home and his hotel room. At this writing, New York FBI field agents are still scouring his offices.

The Never Trump wing is reveling in delight. The liberals are nodding sagaciously. Only Alan Dershowitz is sounding the alarm.

No one has seen the search warrants. No one knows why Deputy Attorney General Rosenstein pushed this warrant to New York. What is known, according to the Washington Post, is that Cohen is being investigated for potential bank fraud and election fraud.

But, Donald Trump is not Richard Nixon and America today is not the Vietnam-era times fraught with an unpopular foreign war. Today, the war being fought is cold and civil and cultural. In D.C. and cities around the country, elites are shocked and horrified that someone such as Trump even is in office. They hate him. They hate anyone who would support him. The fact that Donald Trump enjoys 86% approval among Republicans fills them with revulsion at him and them. Those people.

Many from Mueller on down believe they are doing God’s own work by investigating Trump and following the trail to wherever it leads, even though it’s leading away from Russian collusion and into the Siberia of business sleaze. They are going to cleanse America of this Trump stench, by God, and nothing will stop them, not even attorney-client privilege. Even if skating close to the edge of the law tosses all the evidence, the investigation will so mire the president in legal minutiae that he won’t have time to enact his mandate… and he did have a mandate. Everyone but his voters exhales in relief: the no-mind buffoon can get nothing done. Hallelujah!

As Andrew McCarthy rightly points out, even something as stupid and trivial as a long ago ham-handled porn-star payoff can result in big trouble for a President. This is obviously true. A wrong doing, no matter how small, can spell the end for a politician with salivating prosecutors circling. But drops of truth in an ocean of deceit and corruption tend to get lost in the bigger truth: the system that allows for this kind of destruction and ignores the toxic system creates a populace who lose faith in the institutions that ostensibly seek truth. When the institutions are compromised, their elevating a small truth to cover for their big lies fail.

Trump voters and even fair-minded middle-of-the-roaders consider the crimes committed by Hillary Clinton and wonder at the double standard. She and her team smashed phones and computers to bits after the evidence therein was subpoenaed. Oops. Hillary Clinton and her chief minion Cheryl Mills claimed attorney-client privilege when Mills, herself, was under investigation for obstruction. Did Hillary answer any of the FBI’s questions? We don’t know as they didn’t record the session. Oops. And then, classified emails showed up on Hillary’s assistant’s husband’s computer who is in prison for pornographic interaction with a minor online. Has the Clinton Foundation or Huma Abedin’s home or Hillary’s bathroom been no-knock raided yet?

And then there’s the business of how this Russia investigation started: opposition research that turned out to be specious was used as evidence to wire-tap a Trump associate who had ticked off the number two at the FBI, Andrew McCabe. So the FISA system was used to harm political opposition — the leadership of the FBI, DOJ, and the FISA court were used as a way of “insurance” against Trump. And, boy, has it worked! The investigation prompted by a butt-hurt James Comey based on made-up evidence based on illegal leaks by Comey to the press now leads to scooping up all communications between Donald Trump and his attorney to be revealed to FBI investigators. Sounds fair!

Stipulate to the fact that Michael Cohen made some illegal payment to Stormy Daniels and it somehow entangles the President and the President is pressured to resign or face impeachment, what is this doing to the body politic?

Very Righteous Republicans claim that the moral high road demands justice or else justice is mocked. Really? This whole dog and pony show doesn’t seem like it’s mocking justice? When all of America knows, even the most delusional Democrat, that no Democrat would be subjected to this circus, justice is a joke. (The inevitable mocking response by Republicans keen on calling out hypocrisy doesn’t change the warped justice: “But Hillary!” Two sets of rules is not justice.)

There is no winning here. The cheerleaders for the investigation pull, pull, pull at the ever finer thread holding the states united. They seem to have no idea what fearsome forces they play with. Americans rightly see this fiasco as the intent to undo an election that nearly everyone “important” finds revolting.

Revolt is exactly what the “betters” may find. They play a game and Americans see it. This is not Vietnam. This is America. The cold civil war is about who gets to define what America means. The DC PC police don’t want Trump voters running things. A job so important should be in the hands of the Smart Set™, and they’re going to take the country back, no matter the cost.

The Mueller investigation is a pretense at justice. What it is, is the first shots in a war against American voters who rejected them.

(Other opinions by Emptywheel here.)