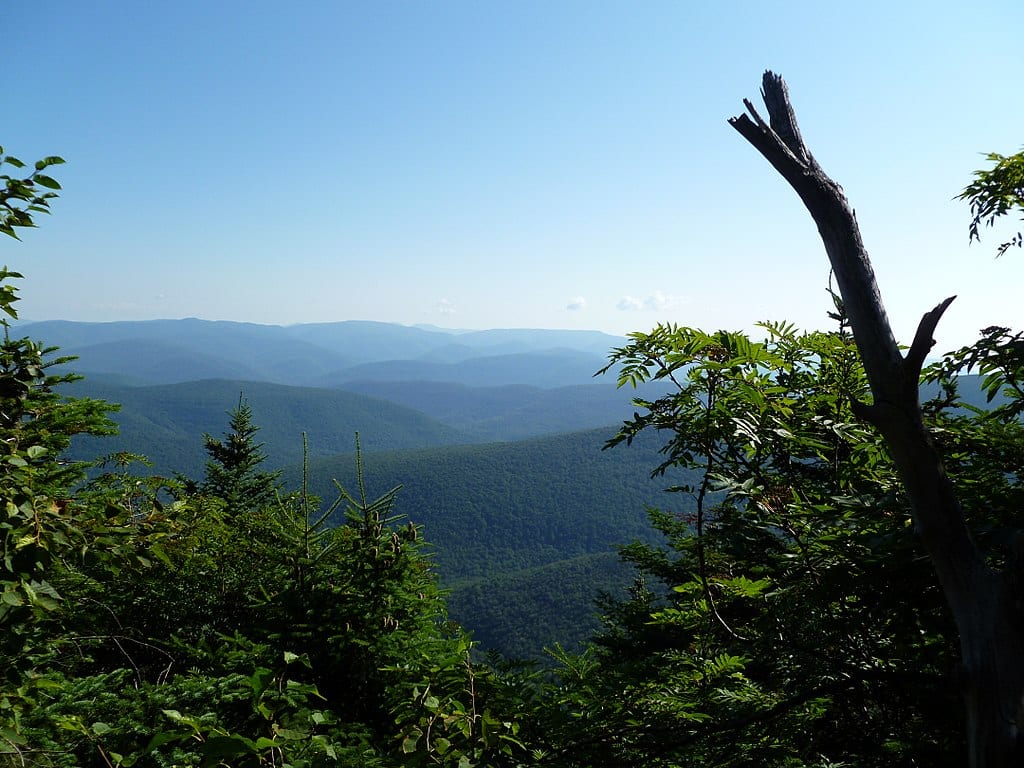 “Whoever has made a voyage up the Hudson must remember the Kaatskill Mountains. They are a dismembered branch of the great Appalachian family, and are seen away to the west of the river, swelling up to a noble height and lording it over the surrounding country.”
— Washington Irving, Rip Van Winkle

When most people hear the word “Catskills,” they think of Borscht Belt comedians and Woodstock (both the town and 1969 music festival). Others think about fly fishing and the Catskill Park, maybe the wildest piece of public real estate located near a major American city. That’s because there are two Catskills: the popular culture one, and the other, the big woods just two hours northwest of New York City.

The region retains its rural flavor thanks to the Park, established by the State of New York in 1885 and encompassing 700,000 acres. It boasts 300 miles of hiking trails that open up 35 named peaks of over 3,500 feet in elevation. Some 30 million people live within a 150-mile radius of it. The advent of the six-million-acre Adirondack Park dates from the same time.

Unlike federal counterparts such as Yellowstone and Yosemite, the New York parks are checkerboarded with “inholdings,” that is, towns and farms and other private property. You can actually live in the Catskill Park. And you can think of this as the idea of “The Commons,” promoted by the late professor Garrett Hardin in his essay “The Tragedy of the Commons,” in which aspects of a landscape with historically traditional uses such as agriculture continue in those uses, while other pristine tracts are preserved for posterity.

I was in the region visiting family and friends one fall a couple of years ago. I enjoy trail hiking in the Rockies, and try to do it elsewhere when I travel. I did two-day hikes in the Catskills during this visit. One was to Giant Ledge-Panther Mountain; the other to nearby Westkill Mountain. The differences encountered when comparing east to west are striking.

The west has its stunning, distant vistas. Jim Bridger, in retirement on the back porch of his daughter’s Missouri farm and suffering from cataracts, ironically said: “I wish I was back in the Rocky Mountains. Out there, you can see forever.” In the east you literally can’t see the forest for the trees. The west is relatively arid, especially in summer, the crystal clear air giving the illusion that mountains even 50 miles away are closer to the observer. The east is temperate, and wet in any season, the misty dripping woods humid and teeming with insects. The west is dry and brown; the east lush and green.

Catskill hikes tend to be shorter and cover easier terrain. Elevation gains from trailheads to summits are usually measured at one to two thousand feet rather than many thousands, as in the Rockies. Along with being muddy, the trails can be rocky with slippery, lichen-covered granite bedrock to be scrambled over. In some ways the mountains of the northeast are rockier than the Rockies. And in the last few years Lyme disease-carrying ticks are causing hikers to take precautions in the woods. I also don’t encounter poison ivy on my western hikes; it’s abundant in the east.

The region is New York City’s watershed with a half-dozen reservoirs supplying the city’s needs. Whether you’re drinking from a water fountain in Penn Station or flushing a toilet in Brooklyn, that water is the bounty of the Catskills, parts of which get 60 inches of rain annually thanks to the orthographic lift of coastal storms hitting the mountains.

The reservoir system began in the early 20th century with construction of the dam on Esopus Creek that created Ashokan Reservoir in 1915. Five more (Schoharie, Rondout, Neversink, Pepacton, and Cannonsville) followed through the decades, culminating with Cannonsville Reservoir on the West Branch of the Delaware River in 1967.

The reviews are mixed when considering the effect the reservoirs have had on the Catskills legendary trout fishery. A total of 58 “river miles” were drowned. Including long sections of Esopus Creek, the Neversink River, Rondout Creek, Schoharie Creek, and the East and West branches of the Delaware. Also submerged were 24 evacuated towns and hamlets, thousands of acres of fertile farmland, and a number of small rural cemeteries dating from the 18th century that were excavated and relocated.

Another controversy from the angler’s point of view was the construction of the “Quickway” (Route 17) up through Sullivan and Delaware Counties during the interstate highway building boom of the 1950s. Completed in 1961, the Quickway connects New York City with western New York State. In the Catskills it required the construction of 12 bridges over both the Beaverkill River and Willowemoc Creek in the Roscoe and Livingston Manor areas. This altered the wilder aspects of the fishery, and ever since, the local view holds that the fishing is better downstream on the Beaverkill and upstream on the Willowemoc. But despite three centuries of settlement and the nearby presence of millions, the backroads’ topography of the Catskills hasn’t changed much.

The annual spring (April 1st) trout season sparks an initial rush to the Catskill streams. Anglers from across the New York metropolitan area descend like a cloud of Blue Wing Olive flies upon these piscatorial waters. The popular opening day shoulder-to-shoulder stream bank spectacle attracts the regional media and craven local politicians seeking photo ops and sound bite opportunities. “Opening day on the Beaverkill is a little like observing Christmas in Bethlehem,” wrote the great sportswriter Red Smith, an avid trout fisherman who devoted dozens of columns to his personal passion.

At Roscoe fishermen wade into “Junction Pool” as they try to hook rainbow, brown, and brook trout where the Willowemoc enters the more voluminous Beaverkill. Roscoe calls itself “Trout Town, USA” and is home to venerable fly shops such as “The Beaverkill Angler,” and Antrim Lodge, for grub and accommodations the Vatican of American trout fishing. Down Route 17 is Livingston Manor, which despite its aristocratic moniker is only a blue collar burg on the Willowemoc, though it’s home to the Catskill Fly Fishing Center and Museum, the small but informative Smithsonian of American angling.

I have fond memories of fishing in the Catskills. The spring weather was normally raw and damp, if not literally freezing. Dressing for it was part of the mystique, as were such tasks as keeping your hands warm, and the eyelets of your fishing rod ice free. Northeastern anglers reassure themselves that as long as the water is relatively clear, the worse the weather the better the fishing. Noon of a bright sunny day is the worst time to attempt to catch trout.

I love the Catskills. They are only an hour farther north of where I grew up in the near northern suburbs of New York City. Back then, they were populated by blue-collar tradesmen and dairy farmers. Today it’s high tech entrepreneurs and hobby farmers selling organic produce to weekend deep pockets hipsters from Manhattan and Brooklyn. The dairy farms are thinner all the time. The Borscht Belt era of hotel-resorts such as Grossinger’s is a half-century gone. As is Max Yasgur’s farm, the “sea of mud” (as the New York Times put in 1969) Woodstock site now home to “Bethel Woods” an upscale concert venue with a museum dedicated to the heyday of American Sex, Drugs, and Rock and Roll. But I still make time for the region when I’m visiting the New York area.

And the fishing on the Beaverkill is still world class. Ask Red Smith.