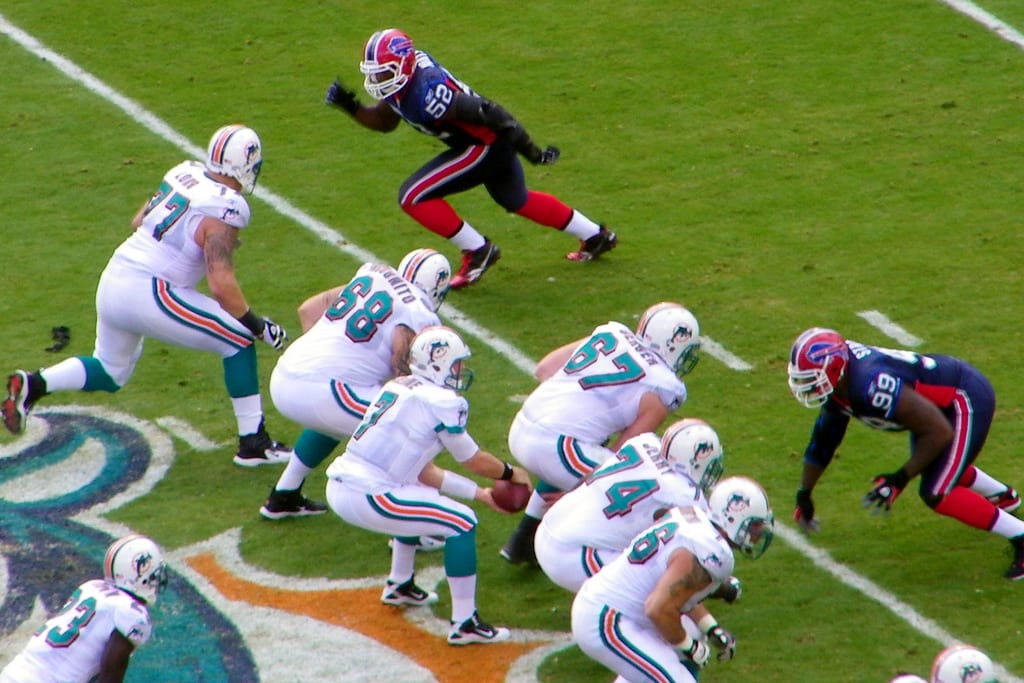 The regular season is over and it went out on a high note. Which the NFL needed badly. It had been a year of low ratings, lousy officiating, players protesting when they were not brawling, and an overall sense of malaise settling over what had been, for years, America’s national sport… if not its national pastime.

But Sunday, all those good memories were resurrected by … the Buffalo Bills?

Until Sunday, the Bills’ name might have been “futility.” For seventeen seasons, the team had failed to make the playoffs. That seemed to make it a perfect match for Buffalo, a city suffering from the usual Rust Belt woes.

The city had been prosperous, once upon a time. And the football team had experienced a taste of glory. The Bills missed winning a Super Bowl in 1991 when a last second field goal attempt sailed “wide right.” Those two words might have been some sort of elegy or curse. The Bills went back to the Super Bowl the next year. And the next. And, yes, the next. And lost all three.

From then on, it was downhill until the Bills settled into the seventeen-year groove. In some of those years, the Bills came down to the last game with a chance, however slender, of still making the playoffs. If they could win their last game and some other team, or teams, would lose theirs, then the Bills would be in. But the magical parlay never happened. Usually because the Bills couldn’t win that last game.

In a gesture of mercy from the NFL schedulers, they would be playing on the road, so the team would fly back to Buffalo in defeat. Glory would have to wait for another year. And another. And another.

Sunday, the Bills needed to beat the Dolphins in Miami where temperatures were tolerable as opposed to Buffalo and most of the rest of the country where people were freezing. The Bills did the necessary but when their game ended, the one between the Baltimore Ravens and Cincinnati Bengals was still in progress. The Ravens were ahead and if they hung on, then they would go to the playoff and, once again, the Bills would go home, again, in defeat and dismay. Home to subzero Buffalo.

The Bills players stood in the locker room, still wearing scraps of uniforms and padding, watching a small television as it came down to fourth-and-twelve for the Bengals. Time, and the Bills’ hopes, were running out.

The Bengals quarterback, Andy Dalton, found an open receiver who made the catch, then ran the ball into the end zone, and therefore, the Bills into the playoffs. The locker room erupted. Clearly, though they might be professionals, some NFL players care about more than just the money.

The Bills flew back to Buffalo in glory where there were hundreds of fans waiting for them at the airport, in three-degree weather.

It was a good scene, good for the city, and good for the game. and it recalled another Bills team and, perhaps, an even better story.

The Bills may never have won a Super Bowl, but they were the last team to win an American Football League Championship, before the league merged with the National Football League to become the… well, the behemoth we have today.

The quarterback to those Buffalo Bills was one Jack Kemp. He was the most valuable player of that game and a few years later, he took up another line of work. He ran for Congress and won. He was accustomed to winning and to some other things as well, saying that “Pro football gave me a good perspective when I entered the political arena, I had already been booed, cheered, cut, sold, traded and hung in effigy.”

Kemp was a sunny, optimistic, can-do personality of the sort that would enhance the political world of today. Also the world of football.

He was elected president of the AFL Players Association in 1963. When the AFL all-star game was played in New Orleans in 1965, Kemp convinced the league’s white players to join 21 African-American players who were boycotting the game in protest of discrimination that took all sorts of forms. Kemp had already refused to ride in a cab whose driver had declined service to some of his teammates, telling them to find a “colored cab.” He had previously fought, successfully, his own team’s policy of making roommate assignments according to race when the team was playing on the road.

He and the rest of the AFL all-stars prevailed in their protest. The all-star game was moved to Houston. That decision was made by league commissioner Joe Foss who had been a Marine aviator and medal of honor winner in the Solomon Islands in World War II. After which he had come home and run successfully for governor of South Dakota. As AFL commissioner he engineered the merger with the NFL and then went on to other things including, among other things, service as president of the National Rifle Association.

The face of professional football, then, was once Joe Foss and Jack Kemp. It is now Roger Goodell and Colin Kaepernick.

But at least the Bills are in the playoffs.