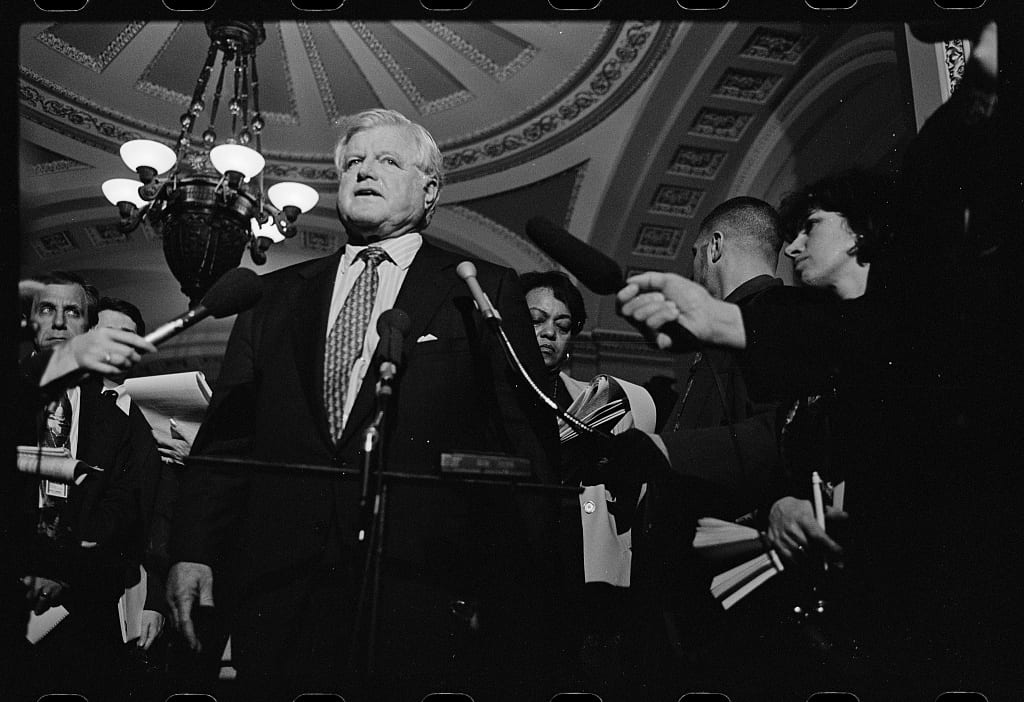 Beginning in December, President Donald Trump rightly decided to link the funding for a $5 billion border wall with keeping the government funded. Naturally, all of Washington has been atwitter as the economy in the Beltway tanks and life in the Emerald City grinds to a halt. Trump has maintained that the shutdown will last indefinitely until the Democrats agree to fund construction for the border wall.

While touring the human carnage along the southwestern border, a mealy-mouthed reporter asked President Trump if he at all feels responsible for the poor, suffering government workers (who only missed their first paycheck on day 21 of the shutdown). The president’s response was priceless: the buck doesn’t stop with me. It stops with all of us!

The emergency at the border (as well as the utterly hapless way in which the federal government funds itself) existed long before Trump became president. These crises were the result of decades-long political malfeasance on the part of the United States Congress. Trump was merely placing the blame (and the responsibility for resolving the problem) where it rightly belonged: in the legislative branch of the United States government.

You can trace the roots of the spending and border crises to decisions made by Congress during the Reagan Administration. Back then, the country was suffering through a rapid, nearly-uncontrollable increase in illegal immigration into the United States. Former President Ronald Reagan resolved to address the problem by making a deal with Democrats on Capitol Hill: he would grant legal amnesty to the millions of illegal immigrants who had already entered the United States. In return, Congress would both allow for the stringent enforcement of existing laws while at the same time enact newer, stricter immigration enforcement laws that would prevent another surge of illegal immigration again.

It wanted to ensure that illegal immigrants had free rein over the country while at the same time doing little to slow the flow down. This was partly because elected members of Congress received generous financial backing from business leaders who were not interested in losing low-wage employment that illegal immigrants offered. It was also because, ever since Senator Ted Kennedy (D-MA) passed the 1965 immigration reform into law, the Democratic Party was increasingly tethered to the idea of changing the American electorate through ceaseless immigration from the Developing World.

Reagan made the deal because he believed the Democrats and the rest of Congress would live up to the bargain they struck with him. Unfortunately, Congress didn’t follow through. After Reagan left office, a bipartisan consensus slowly formed on Capitol Hill that illegal immigration was inevitable and good for the country. Both parties would make utterances about restricting illegal immigration. Ultimately, however, they competed to make electoral gains from the presence of illegal immigrants.

Blowing Up the Deficit: A Congressional Past Time

Similarly, the Left argues that President Reagan was a big-spender; that he engaged in military Keynesianism: pumping up military spending in order to spend the country out of the recessionary woes that he inherited from his Democratic predecessor, Jimmy Carter. Yet, this is not true.

In 1986, President Reagan sought to make tax cuts and spending cuts a major component of his presidency. He only got the tax cuts. Neither party in Congress was willing to fully back the spending cuts. It wasn’t Reagan’s fault per se that the country was put on its debt-laden path. It was both parties in Congress that ensured spending levels continued rising.

Today, the United States suffers with a $21 trillion debt. Government spending accounts for 32 percent of the America’s GDP. Meanwhile, the frightful situation at the border continues to threaten the safety of Americans living along the border, while at the same time flooding the country with illicit narcotics — which kill Americans by the thousands every year. Then, the continued presence of illegal immigrants in the country has cratered employment opportunities for most Americans and has also destabilized the political system in the country.

These trends were in effect long before Donald Trump rose to presidential power. America’s political elite need to face facts: the buck does not stop with the president on these issues. It starts and stops with Congress.

And, for everyone’s sake, Congress needs to start doing its job: it needs to create sensible laws that protect Americans and it must stop acting as a self-enriching wealth redistribution machine. If Congress continues operating in the fashion that it has become accustomed to, then it will destroy this country. Trump is fighting to force Congress to do its job. The next weeks will determine whether Congress is a truly lost institution, or if it just needs a stiff kick in the pants.