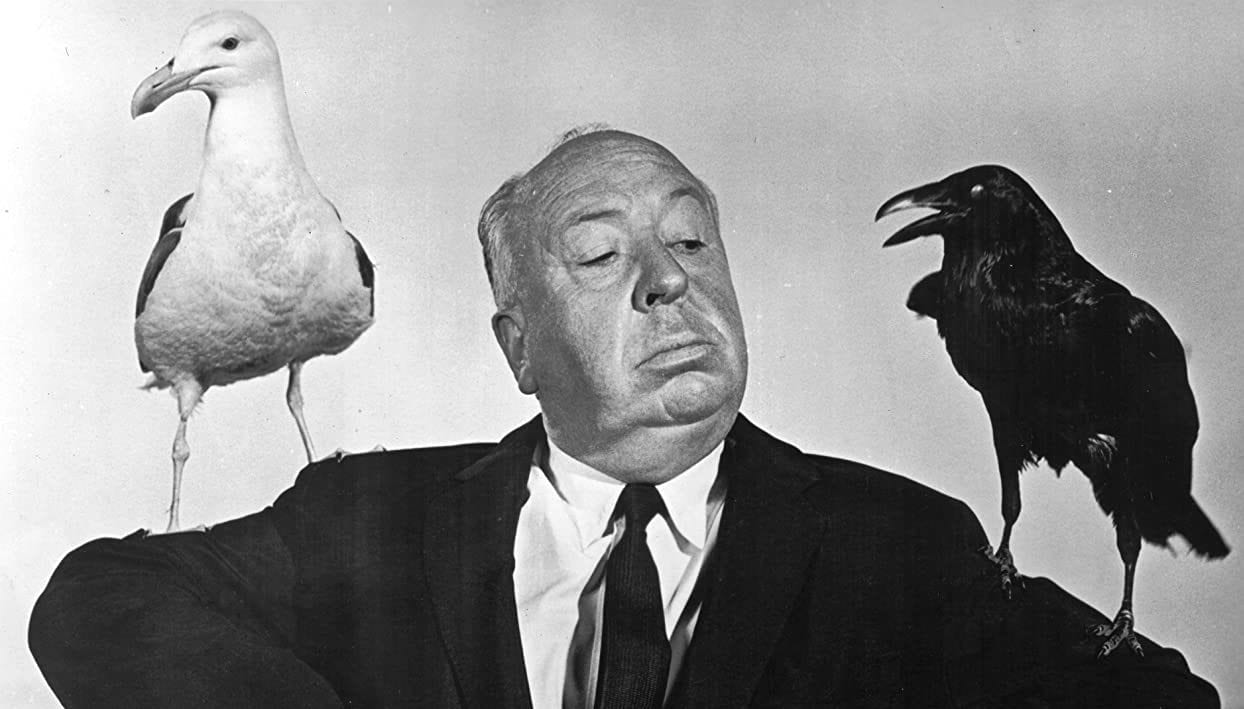 No, the nightmare isn’t the Wuhan/ChiCom/COVID-19/Chinese/U.S. military/bat-cave/bigger-’n’-bigger-government virus. The nightmare is the 1963 film The Birds (more on that after the break), directed by the Master of Suspense himself, Sir Alfred Joseph Hitchcock, otherwise known simply as “Hitch.” He passed away this month 40 years ago.

Born in 1899 in East London to a family of Irish immigrant greengrocers, he attended the still-extant Jesuit St. Ignatius School for Boys. In 1919, he landed a job drawing the intertitles for silent films. An intelligent, clever, and aggressive young man, he directed his first film, The Pleasure Garden, in 1925. In 1927, he found his footing directing his third film (and his first thriller), The Lodger. He never looked back, going on to direct 50 more feature films. Among them were The 39 Steps, North by Northwest, Psycho — and The Birds.

Hitchcock also did television. Beginning in 1955, every Sunday evening, after a morning at church, a pleasant afternoon, and a family dinner, one could watch murders unfold on his series Alfred Hitchcock Presents. He said of the series, “Television has brought murder back to where it belongs — in the home.” His personal introductions to shows inarguably made him the world’s most recognized director, then and now. Put his mug in a headshot lineup with the likes of John Ford, Federico Fellini, Steven Spielberg, Quentin Tarantino, and guess who would be identified most easily by most people?

It’s impossible to adequately describe Hitch’s work in these few short paragraphs. But let’s start by noting that he is considered the Master of Suspense. Or, more commonly, simply the Master. His genius was in using the camera and composing the frame in ways that put the viewer subjectively into the story.

And though he is never listed in the credits as a screenwriter, every screenplay he used (save for a few early silent film–era commission pictures) was written under his direction and coaching.

More books and articles and scholarly papers have been written on Hitch than on any other director. And those are only the works addressing his directorial skills. He has also proven to be a never-ending treasure trove for feminist critics and scholars: Hitch is the face of their nefarious Mr. Male Gaze. Indeed, during the initial Me Too frenzy, a number of feminists tried to cancel him by echoing Tippi Hedren’s complaints of sexual and physical harassment from Hitch during the period in which she starred in his The Birds and Marnie. While the two decidedly did not get along on set, her stories have suspiciously changed a few times and are otherwise dubious and unverified. And they were certainly contradicted by everyone who knew and worked with Hitch. As time has passed, the tempest in the feminist teapot has subsided.

It’s worth noting that Camille Paglia ranks Hitchcock as a great 20th-century artist of the same caliber as Stravinsky and Picasso, writing, “After my lifetime diet of Hitchcock, most of today’s movies seem like very bland fare indeed. Filmmaking needs to return to one of its prime creative sources.” She also wrote a book, published by British Film Institute and also entitled The Birds, about the film.

“The Birds is coming!” deadpanned Hitch in the first lines of the promotional trailer for his film, based (very) loosely on a Daphne du Maurier short story. If you want to reacquaint yourself with Hitchcock in these hunker-in-the-bunker days, there’s no more timely film to watch than The Birds. It’s available to rent on Amazon.

The Birds is an almost perfect film metaphor for our present virus fears and reactions.

Sexy and sophisticated Melanie (Tippi Hedren) leaves San Francisco to hunt down handsome and single Mitch (Rod Taylor) in a small, quaint northern California coastal fishing town. In case you don’t know what her purpose is, she brings along a pair of (hint, hint) lovebirds in a cage. Even before sparks start to fly (or maybe in response to the sparks caused by Melanie’s open sexual intentions and confidence), birds begin bothering the humans. Aggressively. Or maybe their awakening to violence is merely coincidental to Melanie’s opening of the Pandora’s Box of Sex.

Before you know it (and before Trump could be bothered to bring together a task force), birds are pecking the eyes out of little children and old men. The feathered fiends mass together and attack humans, relentlessly. People die. Everyone in town has a guess as to why, no one knows for sure, and Hitch isn’t telling. People hide in their homes, but still the birds find ways to attack. It’s an apocalypse! How do you fight nature? Answer: you don’t! The birds simply desist. No explanation. Perhaps — but who really knows? — the birds have robbed Melanie of the power of her sex; they’ve taught her a lesson.

The Birds was Hitch’s follow-up to Psycho, and I think it’s even more frightening. (Although, after seeing Psycho at the theater, my mother never took another shower and locked the house doors when taking a bath, yet maintained a bird feeder after seeing The Birds). The Birds is gripping in the build-up of suspense, the growing, lurking fear, the growing, incessant violence.

The Birds is an almost perfect film metaphor for our present virus fears and reactions. Time will tell if the damage of the virus will prove bad enough to warrant the current reactions. More to the point, there is a thought-provoking parallel between the fear and bewilderment of the residents of the bird-besieged fishing village and the fear and bewilderment of a large number of present-day Americans. The only difference is that the villagers didn’t know what caused the birds to attack, while we know the virus was developed by … the U.S. military!

Would Hitchcock have enjoyed watching today’s events unfold? Not the loss of life, of course, but he would have been very interested in the reactions to the virus and the vaguely shaped suspicions many have towards the shapers of those fearful reactions. That is, yes, if he could find a way to insert the yearnings and machinations of sexual psychology into the story.