by George Neumayr
Fr. Leo O’Donovan, with Madeleine Albright, at the Dutch Embassy in 2017 (Creative Commons) 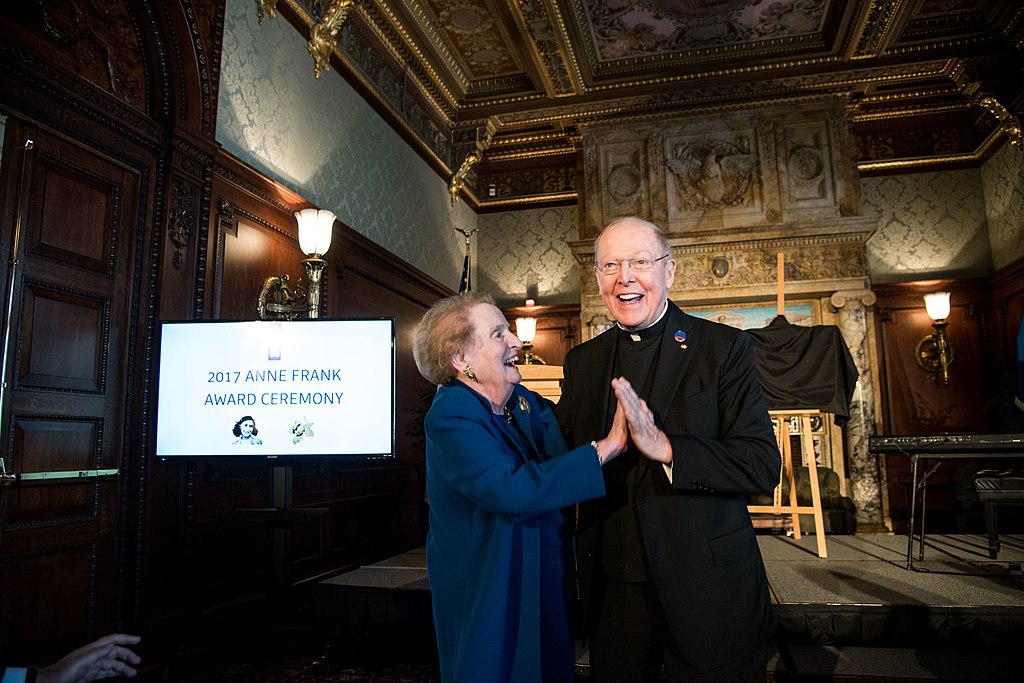 Last year, as riots raged across the country, America’s liberal bishops hesitated to condemn the mob. Far from fretting over the inflammatory rhetoric of Black Lives Matter, some of the bishops repeated it. Bishop Mark Seitz of the Diocese of El Paso, Texas, joined in the protests and held up a “Black Lives Matter” sign. Seitz told the press that after his participation in the protests he received a phone call from the pope. “He said he wanted to congratulate me,” Seitz said.

The Jesuit magazine America condemned Catholics for not joining Seitz: “[M]any Catholics seem too timid to listen and collaborate with new movements, such as Black Lives Matter, that are leading today’s charge for justice.”

Seitz even questioned the seriousness of the mob’s violence. “My brother bishop in Chicago, Cardinal Blase Cupich, suggested we should be less quick to judge the proportionality of ‘their’ response and start talking about the proportionality of ‘ours.’ We also need to remember what Dr. Martin Luther King Jr. said, that ‘a riot is the language of the unheard,’” he said.

No such musings from the bishops followed last week’s violence at the U.S. Capitol building. Their view of inflammatory rhetoric suddenly turned stern. “We must be clear in identifying this moment as the logical trajectory of the last four years of President Trump’s leadership of our country and stare in the face how we have stood by without giving greater witness to the terrible danger that leadership rooted in division brings to a democratic society,” said Bishop Robert McElroy of San Diego to the National Catholic Reporter. “Today we see the face of insurrection in the United States in a way that we have never witnessed in the last hundred years.”

This, of course, is the same bishop who pooh-poohed the gravity of Biden’s support for abortion. At the height of last year’s election, he defended Biden’s Catholicism:

Got that? The slaughter of the unborn is just a “single question of public policy.”

What could be more of an incitement to violence than the rhetoric of abortion Biden routinely espouses? His administration is shaping up to be the most pro-abortion in American history. But you won’t hear any full-throated ecclesiastical condemnations of that from the anti-Trump moralists within the Church. No, they coddle Biden in his baldly heretical Catholicism.

The former Jesuit president of Georgetown, Fr. Leo O’Donovan, “will deliver the invocation at Joe Biden’s presidential inauguration on Jan. 20.,” reports the National Catholic Reporter, which notes that Biden has written the foreword to “O’Donovan’s book Blessed Are the Refugees: Beatitudes of Immigrant Children.”

How many unborn babies will die as a result of Biden’s rhetoric, actions (he plans a raft of executive orders promoting abortion), and judicial appointments? A staggering number. How can the McElroys be so blasé about that while so feverishly denouncing the election-questioning of Trump?

“Catholic apologists for Trump have blood on their hands,” it said. “This is the culmination of what this presidency has been about from the beginning — and some Catholics have remained silent, or worse, cheered it along, including some bishops, priests, a few sisters, right-wing Catholic media and too many people in the pro-life movement.” And how can they atone for these sins? By dropping opposition to the blood-filled, riot-supporting policies of Joe Biden, the editorial says:

While some prelates have spoken out all along, the bishops’ conference, as a body, must publicly confess and atone for its complicity in empowering the president and the Republican Party in this violence and in denigrating the Democratic Party. The U.S. bishops could start by disbanding that ad hoc, adversarial committee on President-elect Joe Biden, and use its various resources to re-shift how we discuss what it means to be pro-life Catholics. A pro-life movement unwilling to exclaim “Black lives matter” is not a pro-life movement.

The blood on Biden’s hands will not be metaphorical but real. Countless unborn children will lose their lives as a result of his policies. The bishops should say this day in and day out. A few of them will, but most of them won’t. They take their cue from the chattering class and prefer the easy moralizing of last week to the much harder work of dismantling the Democratic Party’s culture of death.