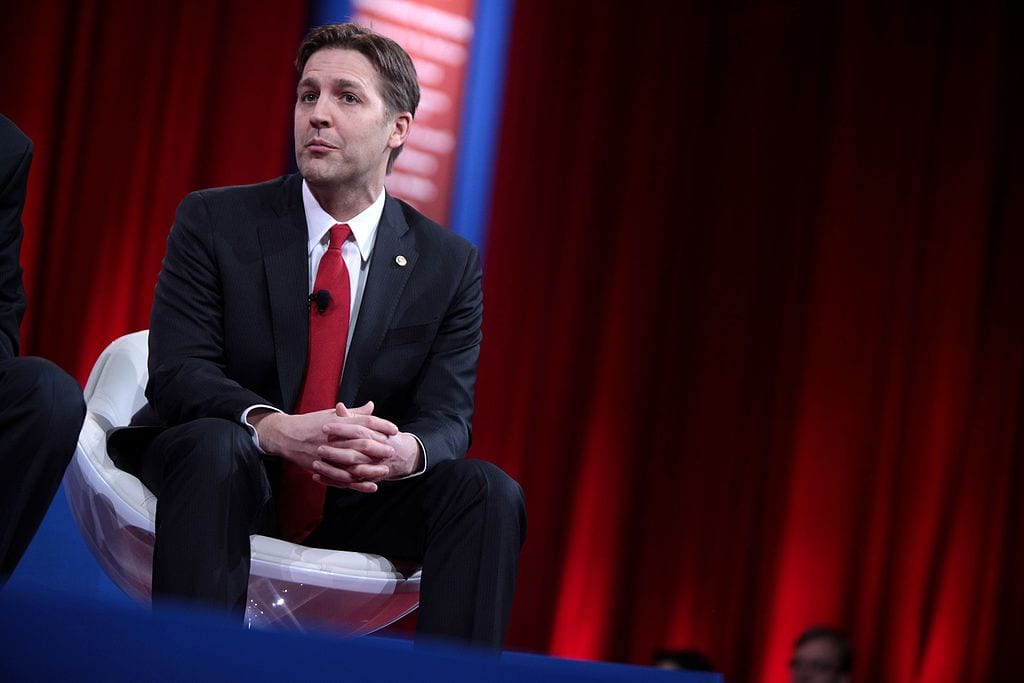 Nebraska’s Republican Senator Ben Sasse has a new book out. The book, is titled Them: Why We Hate Each Other — and How to Heal.

I should note at the beginning that the Senator has a cordial relationship with the Spectator’s Editor in Chief, R. Emmett Tyrrell, Jr. So my dissent here on the Senator’s book is respectful, as it would be in any case.

Which makes the Senator’s book all the more curious. Why? Because, as news accounts have noted, like this one at the Washington Times, Sasse has yet again decided to attack his own side. In 2016 it was his party’s nominee, President Trump. (A refusal to endorse Trump, which, had he gotten his way and Trump were defeated, would have resulted in Hillary Clinton appointing two Supreme Court Justices. His own Nebraska GOP angrily denounced him for abandoning Trump.) Now it’s Sean Hannity. A sample headline:

Ben Sasse: Sean Hannity’s business model ‘not good for the next generation’

Sasse said, in part, that Hannity was trying “to intensify the political addictions to the one percent of America that is listening. The business model people like Hannity advance it is not good for the next generation.”

To which Hannity responded by saying Sasse was a “con artist and phony,” adding:

After your book fails, I will gladly debate you about how the success of the last 2 years never would have happened with your “never trumper” positions. Also we can talk about how you sucked up to me during your election, and why I know you are a con artist and phony. I know you desperately want access to my 600 amazing talk radio stations and to the number one show in all of Cable news.

I was curious. What in the world is Never Trumper Sasse saying in his book? So, I bought the book and looked for myself. And I confess I was seriously taken with its considerable lack of reality about the history of the conservative movement — and Hannity’s role in it.

Let me start with Sasse’s section titled “A Brief History of ‘Who Started It?’” In which he dates the division between Left and Right to the fight over Reagan Supreme Court nominee Robert Bork. I have to admit, this astonished. Sasse reveals that in the summer of 1987 when Bork was nominated he, Sasse, was fifteen. I was not fifteen. In fact, I was in the Reagan White House as an Associate Director for Political Affairs and, with colleagues, was working on the Bork nomination. Without question the fight was extraordinarily divisive, and Sasse accurately describes the behind the scenes efforts of Senators Joe Biden and Ted Kennedy in working with far-left interest groups to deny a Court seat to a superbly qualified nominee. In terms of Supreme Court nominations — as the Kavanaugh battle has shown yet again — the “process” was never the same again.

But the start of the Left-Right divide? Hardly. One wonders in astonishment if Sasse is at all familiar with the careers of William F. Buckley, Jr., Barry Goldwater, and Ronald Reagan. And the fact that all three paved the way for Sean Hannity.

A short history. In 1951, 24-year-old William Buckley penned God and Man at Yale, which its publisher, Regnery Books, would describe in a special re-publication of the book in 1997 as “the protest of a young Yale graduate against the pervasive liberal bias and waywardness of his alma mater.” Buckley himself recounts the reaction to his book in that 1997 re-issue in a new foreword. Liberals of the day assailed the young conservative as a fascist, a Nazi, and a Klansman. In the latter case Buckley cites a hostile review that appeared in Saturday Review. It ended this way:

The book is one which has the glow and appeal of a fiery cross on a hillside at night. There will undoubtedly be robed figures who gather to it, but the hoods will not be academic. They will cover the face.

Sound familiar? Of course it does. If one didn’t know the date on this review was 1951, one could easily believe it was an attack on some modern-day conservative from a Leftist of today. This kind of thing went on throughout Buckley’s entire career.

In 1964, the week Barry Goldwater was nominated for president at the GOP convention in San Francisco, CBS News ran a report saying that at the convention’s conclusion Goldwater would be going to Germany, specifically “to Berchtesgadan, Hitler’s onetime stamping ground….”

Decades later in his memoirs Goldwater was still angry at the implication of the totally false story (he wasn’t going to Germany at all, or even leaving the country) that he was some sort of Nazi.

Reagan was regularly accused in the media and by opponents of being a fascist, a Nazi sympathizer, and pitching for votes from the Klan.

In other words? Long before Fox News, talk radio, social media — and Sean Hannity — these shrill, divisive attacks on conservatives were routine against the conservative stars of the day and their supporters. And like Hannity today, Buckley, Goldwater, and Reagan never hesitated to dish it right back to their critics and liberals in general.

Which brings us to Sasse’s mindblowing charges against Sean Hannity. And yes, full disclosure, I also write over at the Hannity website and appear occasionally on the radio show. But also full disclosure, no one, least of all Hannity himself, has asked me to write this column.

To suggest that of a sudden today we are suddenly dealing with what Sasse calls “angry, fractured hyper partisans” is just flatly not so. As the hostile reaction to Buckley’s book illustrates — all the way back in 1951 — this has been going on a very long time. The difference is that thanks to Fox, thanks to Rush Limbaugh — both cable and the popularity of talk radio have allowed conservatives the platform to respond that they absolutely lacked in the long ago. How Ronald Reagan would have loved to have Sean Hannity on the air during the Bork episode.

Another section in Sasse’s book is titled “Newsflash: There are Nutjobs Everywhere.” In which Sasse uses the definition of “cherry-picking” — “a form of selective reasoning…” — to discuss what Sasse calls “nut-picking.” Sasse defines “nut-picking” as “when people scour the news to find a random person saying or doing something really dumb, and then use that nutjob to disparage an entire group of people, as if the nut is representative.”

Newsflash? What Sasse calls “nut-picking” is in fact the ancient method of illustrating a larger point. Case in point? Ronald Reagan repeatedly did just what Sasse objects to when Hannity does it. In his first book, Where’s The Rest of Me?, published way back in 1965, Reagan talks of doing just this in his speeches that he was delivering around the country for General Electric. In one instance he held out the Tennessee Valley Authority (TVA) as an example of big government mismanagement. A government bureaucrat objected, and GE was concerned because it had a lot of contracts with the government. Reagan, a gentleman always, told GE he would be happy to remove the TVA reference in his speeches because “dropping the TVA from the speech was no problem. You can reach out blindfolded and grab a hundred examples of overgrown government.” Which he did. As a presidential candidate he picked up on the phrase “Welfare Queen” — a term which had originated in a story in the Chicago Tribune and focused on a specific woman who had serially abused the welfare system, bilking it out of tens of thousands of dollars. Reagan used the story to illustrate the larger need for welfare reform. And yes, liberals howled in anger, calling Reagan a racist.

This is in fact what Hannity is doing — exactly as Reagan did. Using specific examples of people and incidents to illustrate the larger problems of the Left. There is nothing remotely unusual not to mention bad about it. Hannity, like Reagan, is a master communicator. Reagan, in fact, won his presidential nickname as “The Great Communicator” precisely because he did this. Suddenly, because it is now Hannity using this very Reaganesque technique, Sasse accuses him of being all about “rage” and playing a “game.” Sorry. It’s arguments like this that get Sasse charged with being a “RINO” precisely because he sounds like a liberal. He may not realize it — and I realize he was a kid in the Reagan-era — but in fact he echoes the charges of liberals against Reagan in the day.

There’s also a Sasse on the laughably untrue idea that Hannity “isn’t a conservative.” As someone who listens regularly to the radio show, watches the TV show as well as having appeared on both — not to mention had my share of off-air conversations with him in social situations — this is wildly untrue.

In sum? Them is a philosophical muddle. Sometimes conservative, sometimes playing to the left-wing bleachers with the attacks on Hannity or Trump.

In fact, Sasse already has an answer to the attack he has made on Sean Hannity. It came in 1975, at the Conservative Political Action Conference — from Ronald Reagan. Reagan put the right answer to Ben Sasse this way:

I am impatient with those Republicans who after the last election rushed into print saying, “We must broaden the base of our party” — when what they meant was to fuzz up and blur even more the differences between ourselves and our opponents.

Our people look for a cause to believe in. Is it a third party we need, or is it a new and revitalized second party, raising a banner of no pale pastels, but bold colors which make it unmistakably clear where we stand on all of the issues troubling the people?

Let our banner proclaim our belief in a free market as the greatest provider for the people.

Let us explore ways to ward off socialism, not by increasing government’s coercive power, but by increasing participation by the people in the ownership of our industrial machine.

It is time to reassert our principles and raise them to full view. And if there are those who cannot subscribe to these principles, then let them go their way.

Sean Hannity is, like Reagan himself, a bold color. And Ben Sasse, based on this book and his Never Trump beliefs, is, alas, a pale pastel indeed.