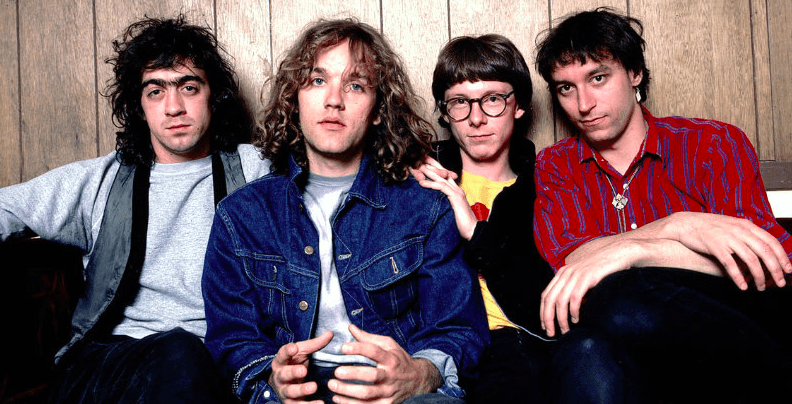 Robert Dean Lurie’s Begin the Begin: R.E.M.’s Early Years tackles its subject at a peculiar time. Eight years after their breakup, R.E.M. appears less relevant and listened to than ever, and the band’s early, indie years strike as a strange period for a book published in 2019 to examine.

But as rock and roll transitions from concerts to curation, delving into the history of one of rock’s last monster bands during its most shrouded periods seems fitting. We watch movies about rock stars. We read their autobiographies. We don’t much listen to their music any more.

“R.E.M. began their live career with an advantage few bands are granted: their first performance at the [vacant Athens, Georgia] church had been so well attended, and had gone over so well, that practically overnight they became one of the most popular bands in Athens,” Lurie writes. And upon release of Murmur, R.E.M. won Rolling Stone’s reader’s poll in “Band of the Year,” “Best New Artist,” and “Album of the Year” — besting Michael Jackson’s Thriller — categories. Yet, deliberately, they slowed their ascent. Rather than plug a single, R.E.M. played a then-untitled and unreleased “South Central Rain” on David Letterman’s program. Listeners could not decipher lyrics to songs; once they cracked the code, they did not understand their meaning. The band cultivated a college radio following, and charted a single in the top 40 only after releasing five albums and an EP.

The stardom and stall strike as one of the band’s many paradoxes. They formed in Athens, Georgia, so they technically played as a Southern rock band, but nobody ever confused them for Molly Hatchet or 38 Special. Though eventually one of the most political rock bands in history, not one of the four members voted in the 1984, an election they later cited by name in “Ignoreland” emphasizing “the Us vs. Them years.” The left-of-the-dial darlings eventually signed one of the largest contracts in recording history and ruled over radio and MTV from the late 1980s well into the 1990s.

The climb ironically relied on right-wing Reaganite Miles Copeland signing the most politically correct band in history to IRS Records, his brother Ian serving as the band’s booking agent, and his other brother Stewart’s band The Police allowing R.E.M. to open up for them near the height of their fame and when R.E.M. meant rapid eye movement, if it meant anything at all, to the youth culture.

Another personality crucial to the climb aggressively pushed politics at odds with Copeland’s. “Jefferson Holt is one of the most problematic figures in R.E.M.’s history — problematic because the band members and their remaining management did their best to erase him from the R.E.M. story following their acrimonious split with him in 1996,” Lurie writes. The band’s manager became the de facto fifth member. The son of a liberal state legislator from North Carolina, Holt nudged the largely apolitical R.E.M. in a politicized direction, which ultimately contributed to his undoing when sexual harassment complaints mounted against him in the mid-1990s.

Don Gehman, producer of Lifes Rich Pageant, including such classics as “Fall on Me” and “Cuyahoga,” implored the lead mumbler to annunciate his lyrics. “The two men had a series of ‘heated but respectful’ conversations regarding [singer Michael] Stipe’s process and finally reached an accommodation: Stipe could continue to be obtuse, but Gehman insisted that the words at least be discernable and the vocals clearly audible.” No longer able to hid behind the din, the lyrics unsurprisingly became more coherent once Stipe agreed to sing them more clearly.

People who know R.E.M.’s songs but not their stories will learn much. Stipe does not just play a weirdo on stage. Signs of drummer Bill Berry’s preference for a tractor to a drum kit arose early. Guitarist Peter Buck, who looked like that guy who worked in your local record shop, worked in a record shop. Bassist Mike Mills, dismissed as a nerd by Stipe and Buck (hardly cool kids themselves) before Berry prevailed on them to let him join, partook in the rewards of the road to such an extent that some of the band’s dedicated female fans regarded him as a playboy under a dork’s glasses.

Lurie, author of a short book on David Bowie and a longer one on Australia’s The Church, writes here as a fan. He shows his best stuff in unearthing the obscure human relics of R.E.M.’s early years — an old girlfriend here, a club sound man there. He struggles (Don’t we all?) in spending too much time as a codebreaker to Stipe’s Enigma Code lyrics — realizing the fool’s errand he runs in concluding of Reckoning’s “Harborcoat”: “Oh, what’s the use? I give up. What the hell is a harborcoat, anyway?”

Lurie writes as a worthy Boswell to R.E.M. Like his subject, whose at times jangly and at times murky guitar-driven sound contrasted with the synth-heavy New Wave music world into which they entered, the author explores the untrodden path in the band’s period when interviews and public attention was most scarce. But here they essentially created alternative rock, a genre that still exists if not as a coherent form of music then at least, ironically, as a corporate brand of sorts denoting anti-corporate rock sounds from outside of the mainstream. Given that “outside the mainstream” describes almost all contemporary rock music, readers can either thank or blame R.E.M. for the genre’s exile from Main Street.

Correction: An earlier version of this article confused Ian Copeland for Miles Copeland in detailing his political views.