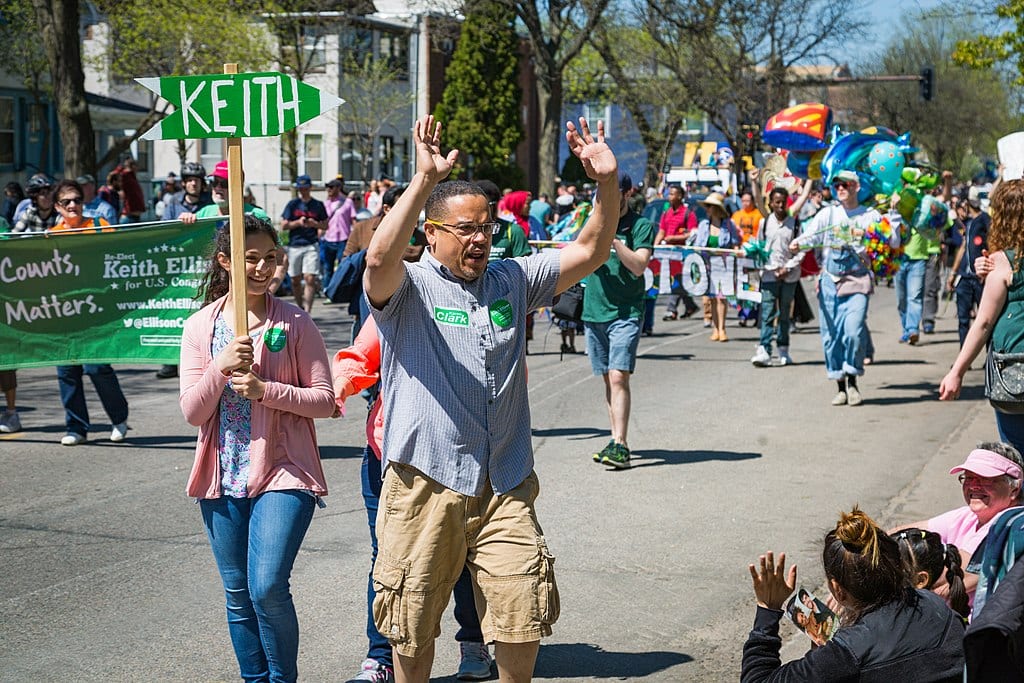 Today’s Democrats are a party dedicated to… what, exactly? It’s a difficult question to answer, because they don’t seem to be all that good at letting the American people know what they’re for. Certainly we know what they’re against — Donald Trump and the private sector; that’s obvious.

If there was any doubt about this it should have been extinguished when Rep. Keith Ellison, the Minneapolis Nation of Islam alumnus who was nearly made chairman of the party and instead is its deputy chair, tweeted a photo of himself holding a copy of “Antifa: The Anti-Fascist Handbook” and included a caption claiming that he had “just found the book that strike [sic] fear in the heart of @realdonaldtrump.”

Which is more than an implicit endorsement of rioting, property damage, and political violence — things that are definitively beyond what is acceptable discourse in this country, particularly as practiced by what’s billed as a mainstream political party.

There isn’t a lot of doubt about Antifa. That is an organization dedicated to destroying the American way of life. Which is also true of the Nation of Islam, which Ellison was a member before, he says, he made his way into regular Islam as Congress’s foremost ally of the anti-American Muslim Brotherhood.

For the rest of us observing Ellison’s antics, it’s hard to avoid this question — how often can Ellison ally himself with the avowed enemies of the American way of life before it’s fair to describe him as an enemy of our way of life? And haven’t we already reached that point?

Better late than never, I guess: it looks like the FBI is back in business with the Clinton Foundation investigation, in case you haven’t heard…

The Justice Department has launched a new inquiry into whether the Clinton Foundation engaged in any pay-to-play politics or other illegal activities while Hillary Clinton served as Secretary of State, law enforcement officials and a witness tells The Hill.

FBI agents from Little Rock, Ark., where the Foundation was started, have taken the lead in the investigation and have interviewed at least one witness in the last month, and law enforcement officials said additional activities are expected in coming weeks.

The officials, who spoke only on condition of anonymity, said the probe is examining whether the Clintons promised or performed any policy favors in return for largesse to their charitable efforts or whether donors made commitments of donations in hopes of securing government outcomes.

The probe may also examine whether any tax-exempt assets were converted for personal or political use and whether the Foundation complied with applicable tax laws, the officials said.

Don’t get too excited about this, because you’re beginning to run into a statute of limitations problem with respect to the Clinton Foundation material. After all, Hillary Clinton left office at the beginning of 2013 and we’re five years on from that time — which could scrub a lot of the potential corruption charges in play from her escapades as Secretary of State.

This should have been a priority investigation last year, and it wasn’t — mostly because the Justice Department did everything it could to let the air out of the FBI’s work on the Clinton Foundation case last year. Attorney General Jeff Sessions, who’s now at war against legalized marijuana for some reason, allowed the obstruction of the Clinton investigations last year and now it’s likely too late to do much of anything in the way of a real prosecution.

But at least it’s something.

No, I don’t have an opinion on the Trump-Bannon controversy. In Washington everybody seems to have a hot take on it, but I’m not in Washington and don’t want to be.

I really don’t care about Steve Bannon or his relationship with Trump, or things he has to say about the president. I suspect most people don’t care about that subject either. By Monday it’ll be played out.

Another war of words involving the president which carries more importance is his tête-à-tête with North Korea’s dictator Kim Jong Il, in which both boasted of access to a nuclear button.

It was Trump’s response to the bizarre ramblings from Pyongyang that caused more of an international stir, something that is perplexing. After all, Kim was the one who initiated the trashtalking by making nuclear threats against the United States. We know that those threats are mostly empty; Kim is quite evil but he’s not crazy, and starting a nuclear war with America will result in the certain death of most of his people and particularly his inner circle.

What Kim wants is a guarantee like the one Fidel Castro got out of the Cuban Missile Crisis; namely, that the United States won’t remove his regime. Flaunting his nuclear capacity in pursuit of that guarantee merely reflects his understanding of reality — he has nukes and will thus survive; Muammar Qaddafi and Saddam Hussein had none and therefore fell.

Before Trump, that America’s foreign policy intelligentsia understood all this meant it was considered smart to absorb Kim’s misbehavior with a timid shrug. Anything else is to be considered provocative — by the people who are responsible for creating the sea Kim swims in, we should remember.

Trump’s tweets on the subject may or may not be a good idea, but maybe we should have fewer lectures to him about North Korea policy from the people who have coddled the dictators of that country all this time.

Finally, Iran. It’s now conceivable that the theocratic regime in that country might be on the way out amid mass protests in virtually every one of its cities.

Nothing possible in 2018 would signal the forward march of humanity to peace and enlightenment more than for those protests to result in regime change there. And everything possible should be done to further that end.

That said, watch the criticism made of the Trump administration should it decide to help the protesters with either words or deeds. Already, the critics — including the Obama minions who brought us the $100 billion tribute paid to the mullahs for a worthless nuclear weapons deal — have told Trump the best thing he can do is to shut up.

Don’t shut up about Iran, Mr. President. Be loud. Do more.