A Further Perspective,Top Story 9/11,Afghanistan,America,War Thank You For Your Service - The American Spectator | USA News and Politics
Menu
A Further Perspective
Thank You For Your Service
You deserved better than this.
by Matt Keener
A U.S. Marine plays taps during the Memorial Day ceremony at Camp Leatherneck, Afghanistan, May 31, 2010. (Wikimedia Commons) 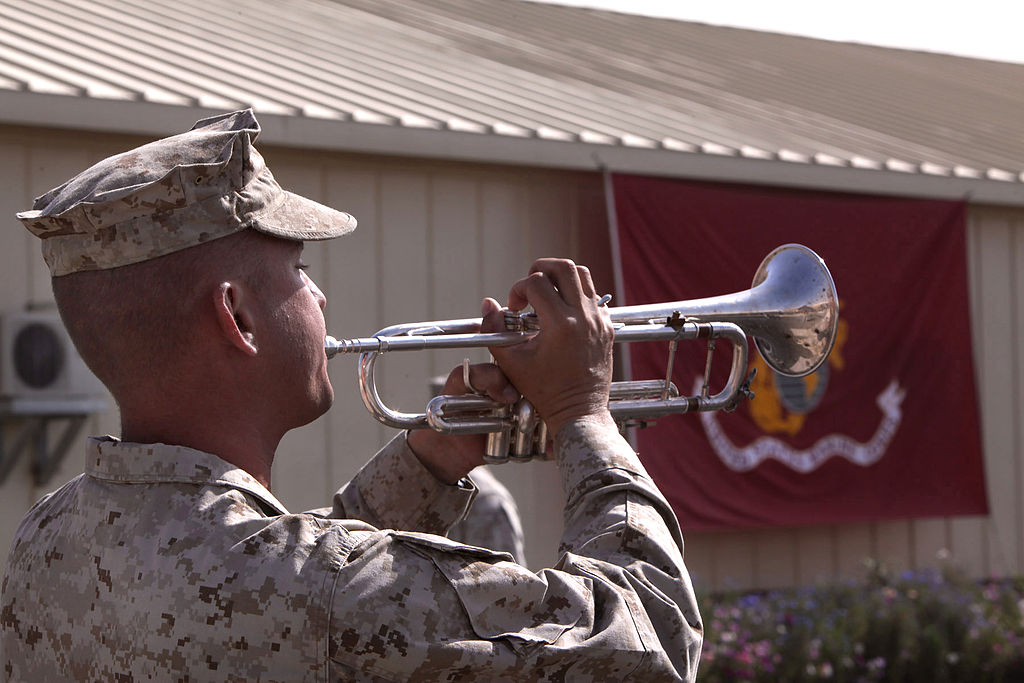 “The greatest evacuation in human history.”

Our nation’s longest war, a war my generation grew up with, is “over” according to President Joe Biden almost 20 years after it began.

Twenty years ago — about five or six months before 9/11 — my friend Dave and I walked into the local National Guard Armory and talked about the possibility of enlisting.  At the time — it was equal parts money and the proposition of free college as it was patriotism. There was an ASVAB test we needed to take. I would need to lie about the fact that I experienced athletic-induced asthma growing up — other than that, just a few documents to sign. Ultimately, we had second thoughts.

Dave went off to Ohio State and I went off to Miami of Ohio —  and neither of us joined the Ohio National Guard. A few months later — I watched the second plane hit the twin towers live from my freshmen dorm room in Oxford, Ohio. Soon thereafter our nation was at war in “the war on terror,” all over the globe.

When then–President George W. Bush insisted this meant we reinvade Iraq to eliminate “weapons of mass destruction” and its ability to harbor terrorists — we willfully obliged.

CNN invited viewers to watch the spectacle and the display of American might as we unleashed a “shock and awe” campaign of “smart” weapons and bombs. I tuned in nightly. It was said to be over quickly. It was not.

With Operation Enduring Freedom in Afghanistan, a second war in Iraq and the Authorized Use of Millitary Force (AUMF) — we were drone striking and fighting wars across the planet to eliminate threats and unleash what we were certain at the time was a justified retribution for the attack on the Twin Towers.

Over the course of the next 20 years, many a young man would go off to war — often fighting ideas and ideologies more than nations. And some of them would die.

The first person I knew that died in the global war on terror was Devin Grella. A high school classmate, Grella died in 2004 when an improvised explosive device detonated while he was riding in a convoy in Iraq. He was 21 years old. A press release said he joined the military as a patriot, “with the goal of becoming an officer and earning money for college.”

I worked with Michael Cifuentes in college at Brickstreet Bar and Grill in Oxford, Ohio. He was killed in one of the deadliest attacks of the war when a roadside bombing killed him and 13 other marines, many from Brookpark, Ohio with the  3rd Battalion, 25th Marines in 2005. Reading news articles on Cifuentes this morning led me to a story from a newspaper I interned at during the time I worked with Mike. Ten years after his death — the Journal-News interviewed Michael’s father Greg who shared a haunting quote in 2015. “The 10th year is no better than the first,” he said.

Then there were the ones that came home. Daniel F. needed to face the door when I met him. Loud noises set him off. He couldn’t hold a steady job. He had multiple tours to Afghanistan and Iraq — now he was taking multiple trips to mental hospitals. He witnessed terrible things by friend and foe.

A coworker’s brother spent much of his initial time after returning home in her mother’s basement.

Another coworker tearfully explained of his time spent in Afghanistan, “Everyone of us left a piece of ourselves over there.”

So that was the overwhelming theme or feeling I felt even before an explosion at Kabul airport killed 13 service members in one of the deadliest days for our military in nearly two decades. These people deserved more than this. The Afghans. The Americans that died. And every single citizen who answered the bell when the nation called. They all deserved better than this tragic, backwards, and chaotic erasure of their progress and their sacrifice.

Somewhere in reading the stories of the 13 service members who made the final sacrifice to date in our war on terror at the Kabul airport — I found tears in my eyes. It started with Steve Nikoui retelling Tucker Carlson how he had to let his wife know that their son, Kareem Nikoui, was not coming home. He told the story of how the Marines who came to tell him waited willingly at his request for hours after he spoke with them to see if his wife wanted to — or was able to — hear the news from them.

“Those boys sat out there for four hours. For four hours they sat out there. Until my wife came … which she — no. It was not good. I could not, I could not have them come to the house. It was horrible. Like I said I have been up for 36 hours…” Nikoui said, choking up.  “I was in awe and humbled by their performance.”

I continued reading about the others. It was the story and the post from Mallory Harrison about her friend, Marine Sgt. Nicole Gee. I was in the middle of the gym on the leg extension machine, keenly aware of how inappropriate that would appear for the time and place. Rather than a couple of tears — it felt like it could be a blurting out awkward cry.

It was this quote that did me in: “My best friend. 23 years old. Gone. I find peace knowing that she left this world doing what she loved. She was a Marine’s Marine. She cared about people. She loved fiercely. She was a light in this dark world. She was my person.”

Harrison shared memories of her friend and the experience growing up together in the Marines throughout the post along with the stark realization that “her car is still there, and she’s gone forever.”

Gee was pictured in photos just days earlier at the Kabul airport. There were photos of her holding a child or smiling with Afghans as she walked with them across the tarmac that seem to be evidence of the idea “she left this world doing what she loved.”

Navy Medic Max Soviak, 22, is from a town about an hour from where I live in Ohio. He is described in an Akron Beacon Journal article as “a toddler during 9/11.” In his widely circulated wetsuit photo — it is hard to tell if it’s from a family vacation with his parents or military training. It could be either, but the first option seems more likely from his grinning baby face. Babies. Nearly all of them. Youth may be wasted on the young but many old men have sent children off to die.

I have often thought of the trip Dave and I took to the armory. We were babies pre-9/11 and pre- a nation at war. I drive past it daily. It sits just a few hundred yards away on the same road as the business I own.

I wonder how different things could have been?

Perhaps now is a good time to stare directly at the awfulness and unfairness of war and listen to the painful stories from the mothers and fathers. It would behoove our leadership to learn the lessons Afghanistan has forced us to relearn yet again before plunging into future conflicts.

Nicole Gee, Max Soviak, Devin Grella, Michael Cifuentes, and everyone in between, thank you for your service.

Every single member of our armed services left a piece of themselves or someone they know behind in Afghanistan or Iraq. I can’t help but think that everyone who answered the call deserved more than this.