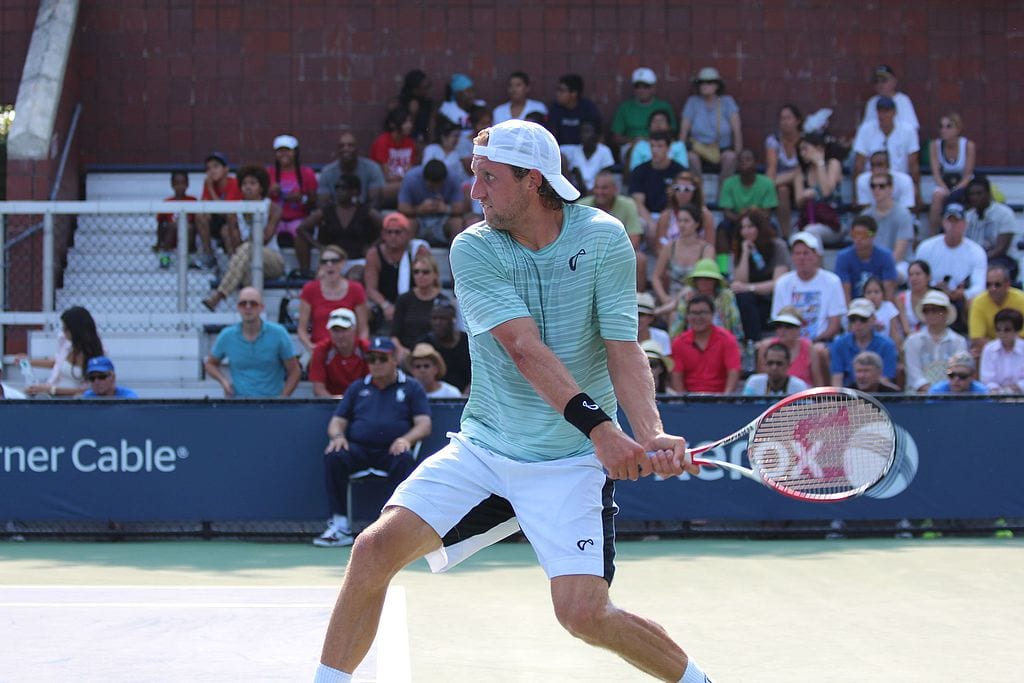 Sandgren was a star college player a few years back, but for the most part has stayed in the tennis minors, known as the Challenger circuit, respectable of course, but not the bigs. He has (as best one can judge with the help of the Tennis Channel) a stylish all-court game and never quits — he went to five grueling sets against Thiem in the high-90s temperature that prevailed through most of the fortnight.

Tennys (real name, family tradition) Sandgren’s achievement was all the more striking as the rest of the American field flopped, including several of our top hopes, such as Jack Sock, John Isner, and Sam Querrey, who fell out of the draw in the first or second rounds. This failure included the much-touted “next-gen” cohort, notably Jared Donaldson and Frances Tiafoe.

Americans have not been doing terribly well at Slams lately, so any prognosis for the 2018 season on the basis of the first one would be premature. Still, it was remarkable that instead of using the surprise of a new face’s comparative success next to the discomfiture of the known ones, the news overnight shifted to Sandgren’s alleged political views, as represented by some digital messages he has sent out over the years on a gizmo called “Twitter,” which I am told the noted opinion leader William Kristol uses.

Sandgren was alleged to have “alt-right” sympathies and to have voted for Donald Trump in the last election; he also is supposed to have expressed distress following a visit to a homosessual night club, whatever that is, and disapproval of Miss Serena Williams’ on-court behavior during a match (which she lost) against Roberta Vinci at the 2015 U.S. Open.

Miss Williams, who was not present at Melbourne Park to defend her championship due to maternity leave, reacted by demanding an apology. Without doing quite that, Sandgren nevertheless expressed regret for hurting anyone’s feelings. He also noted that the herd-like finger-pointing in his direction was unfair and based on no serious effort to understand his views.

However, the booing stopped when he lost to a young South Korean phenom, Hyeon Chung, 19, in three sets. Chung then played Federer in the semis, but retired in the second set with a foot injury. Rafa Nadal meanwhile was retiring in his semi against Cilic, practically unable to move due to cramps in his legs and hips.

The surfeit of injuries has been the talk of the tennis world for some time now — Andy Murray was out of the tournament altogether due to a scheduled hip operation, and Novak Djokovic, who was beaten in three sets by Chung in the round of 16, was visibly not in form, despite a six-month layoff.

There were three competitive sets at the men’s final of the Australian Open, and two quick rollovers. It was, however, the only match of the tournament when Roger Federer had to play more than three sets.

He demolished all comers except his friend Marin Cilic, whom he demolished at the Wimbledon final last year. This time, the tall Croatian, with big serve and a forehand to rival Juan Martin del Potro’s, gave the defending champ a serious run for his money (nearly three million; Cilic pocketed half that for his effort.)

It was Federer’s second Australian Open win in a row and 20th Slam overall: further confirmation of his mastery of the sport in his generation. At 36, Federer gives every indication that he will break the mark for oldest Slam winner currently held by the Australian legend Ken Rosewall.

Rod Laver, Rosewall’s fellow-legend, and Pat Cash, a more recent Australian great, both commented that, if anything, Federer’s game is better now than it was when he won his first Australian Opens in his 20s (2006, ’07, and ’10.) They agreed he has a much stronger backhand, a more accurate and dangerous serve, and more tactical finesse. Cilic’s gorgeous forehand winners were all the more remarkable for being so hard to set up against Federer’s relentless point dictation.

With regard to Cilic, who won the U.S Open in 2014 (beating Federer in the semis, his only win against him), you could at least argue that nice guys do not necessarily finish last; they are sometimes runners-up. You could argue this about the women’s draw, too: in the finals two nice, good-natured, and deserving ladies, Romania’s Simona Halep and Denmark’s Caroline Wozniacki, found themselves with a shot for their first Slam trophy.

Both suffered the curse of being, or having been, ranked No. 1 in the world and yet not winning a major. Miss Halep entered the tournament ranked (and seeded) No. 1; Miss Wozniacki enjoyed a run as number one earlier in the century but has suffered injuries and a major heartbreak and fell way behind. Over the past two years, and last year in particular, her comeback has been steady. She now seems to be fully deserving (again) of Bud Collins’ admiring quip, “the Golden Retriever” (she is blonde), the most relentless baseline player on the women’s tour.

But Simona Halep is relentless too; the final could have gone either way. Miss Halep battled bravely to the end despite visible exhaustion. She was coming off some hard-fought matches, against Angelique Kerber in the semis in particular, and running on an ankle that she rolled in the first round.

With its capacity crowds at the grand stadia named for Rod Laver and Margaret Court, the Australian Open is fulfilling its ever-growing popularity as the “Grand Slam of Asia and the Pacific.” The Tour heads next to the Western Hemisphere and, maybe, a run of American success.