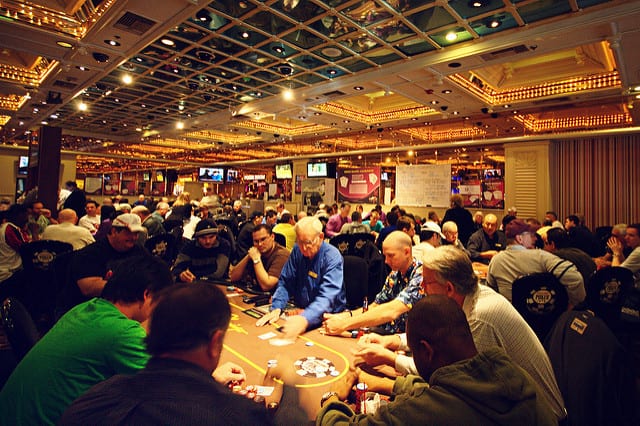 Stop if you’ve heard this before, but you can’t believe everything you see on TV.

But what you see isn’t always what you get. Televised poker often presents a rather misleading look into the world of tournament poker. In addition to some obvious differences, such as, you know, the fact that drunk who gave away all his chips in that $50 Flamingo tournament wouldn’t ever play the $1 million buy-in Big One for Big Drop at the Rio, you’ll find plenty of differences between what’s myth and what’s reality.

MYTH: Players play many — if not most — of their hands in tournaments.

REALITY: Good players will fold between 80 to 90 percent of the hands they’re dealt. Tight play is the rule in tournaments because players usually don’t want to bust out by playing a bad hand. They must also pick and choose their battles over what can be an all-day or multiple-day event. (Most major events at the WSOP last three or more days.) The reason you see players playing more hands on TV is that producers cut out most tedious hands with little action to trim what might be a 10-hour day of play into a two-hour broadcast. What you actually see on TV is only a portion of the action. In the majority of hands, a player raises the blinds and everyone folds before the flop, or if there is a call preflop, a bet on the flop takes the pot. These types of hands don’t make for exciting television so you don’t see them televised.

MYTH: Small pocket pairs like 4-4 or 5-5 play well in a tournament and players should raise with them.

REALITY: It depends. (That’s actually a hilarious answer. Don’t believe me? Ask any poker player… ok, it’s not that funny). Early in a tournament it’s ok to limp, or just call, with a small pocket pair in hopes of flopping a set, or three of a kind. In late position, if no one has entered the pot, it can be productive to raise and try to steal the blinds and antes. Only when the table has few players late in the tournament can players begin being more aggressive with small pairs, often raising from any position when there are only six or fewer players at the table and sometimes putting their entire stacks into the pot with a hand like 7-7.

MYTH: Players should constantly go all-in, pushing all their chips to the center of the felt.

REALITY: The all-in maneuver is often overused by inexperienced players, and you’ll see players put all their chips at risk when they don’t need to. Rarely in the beginning of a tournament should a player go all in before the flop unless they find themselves extremely short-stacked or in a particular advantageous situation. Granted, if you’re playing one of the many shallow-stacked and fast-structured daily tournaments that litter casinos, you may be in a spot rather early in which you may need to shove all in. As a general rule, if you’ve only got 10 times the big blind amount (2,000 chips if the blinds are 100-200) it may be time to push and pray. In televised tournaments, the action often picks up later in the event when the blinds are high relative to the sizes of most players’ stacks. This puts them in situations where it’s smart mathematically to shove all in.