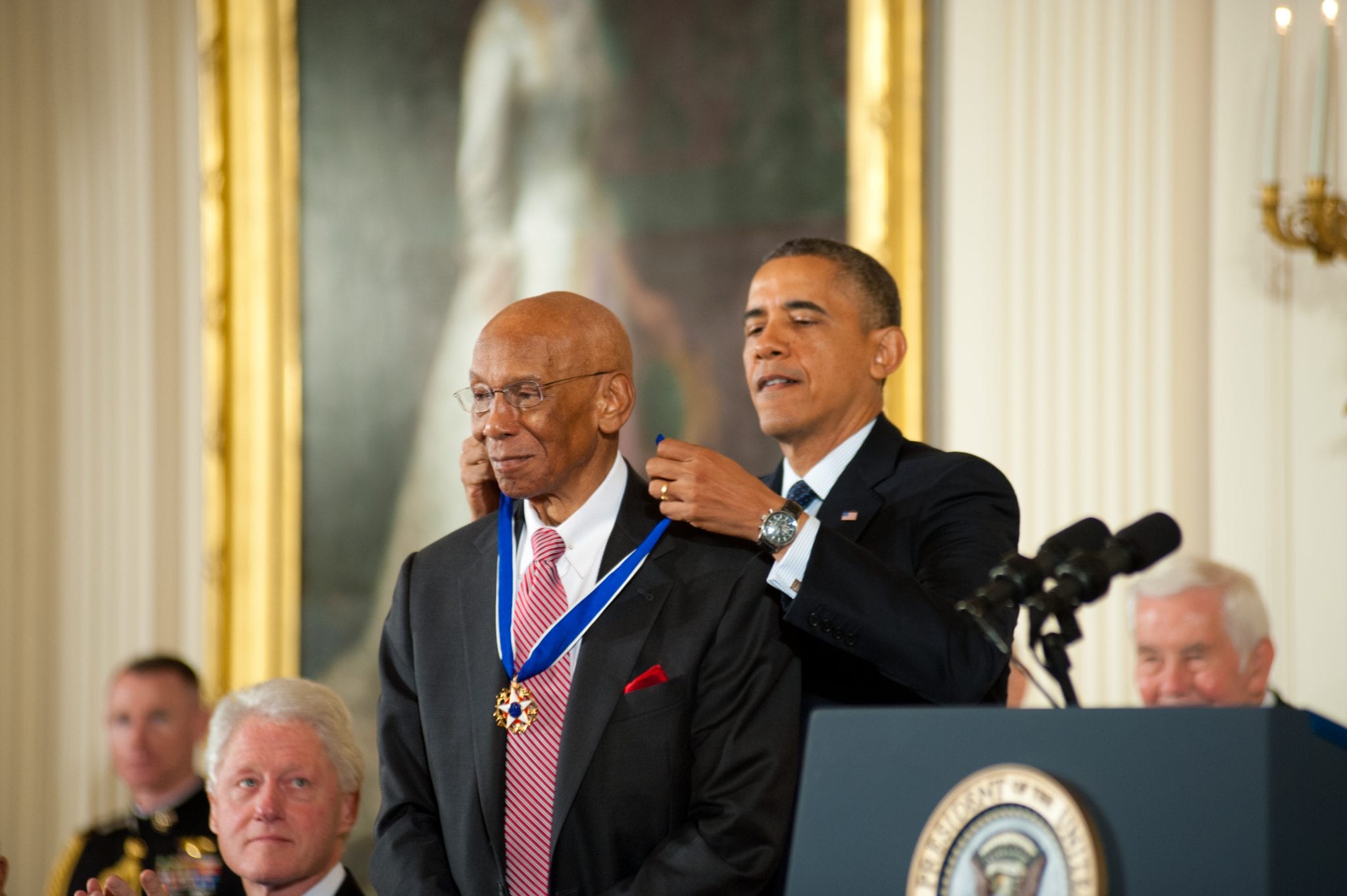 For baseball fans of a certain age, especially those in and around Chicago, there has never been a cheerier Major League presence than Ernie Banks. His oft-repeated signature statement was, “It’s a beautiful day — let’s play two.” He said this with a smile, even though this gifted athlete had the ill-luck to play on some truly awful Cubs team in the fifties and early sixties. Teams that stood a good chance of losing both ends of any double-header they were involved in. Only late in his career, when Banks had slowed down a bit, was he surrounded by sufficient talent to make his and the Cubs’ prospects favorable.

Chicago had a rep — perhaps justified in Ernie’s day — of being racist. Martin Luther King Jr. called Chicago the most racist city he had ever been in. No reason to believe it remains so (no matter what Jesse Jackson and Jussie Smollett say). But when Banks arrived in Chicago in 1953 — young, shy, and a bit overawed by it all — he quickly learned where he could comfortably go and where he should avoid, where he could live and where he couldn’t.

It wasn’t that Banks, then 22, was unfamiliar with racism, having grown up poor in a family of 12 in Jim Crow Dallas. But he must have been disappointed to learn that things were not much better in this large northern city in which he was now to make his home and his living. But it didn’t take long — thanks to Banks’ charm and his performance on the field — for Chicagoans to take him to their hearts, where he has always remained, even now, four years after his death.

Banks’ claim to be a legitimate Hall of Fame player (first ballot) is not in question. In a 19-year Major League career he hit 512 home runs, more than 40 in five different seasons. He was the National League’s Most Valuable Player twice, which was not easy on the sad-sack Cubs teams he played for. Early on he certainly did not have good hitters coming up behind him to protect him. No point in giving Banks anything good to hit when he’s the only strong hitter in the lineup. When Banks drove in 143 runs for the 1959 Cubs, on the strength of 45 home runs and a .304 average, the wonder was that the Cubs put enough runners on base ahead of him for him to drive in all those runs.

Banks’ power as a hitter was a bit of a mystery. He was 6-1 and probably about 170 pounds when he first arrived in the bigs from the Kansas City Monarchs of the Negro Baseball League. He may have played at 180 late in his career. He was never the profile of the big, muscular slugger. But with strong hands, forearms, and wrists, along with a light bat that he developed good bat speed with, he was able to hit line drives that left the park quickly and with regularity. His 500th dinger was one of his patented line drives, just barely into the cheap seats.(Cheap then — not now.)

Ernie Banks the man is harder to parse than Ernie Banks the ball player. Where did he get all that cheerfulness is a more difficult and more interesting question than where did he get all that power. Those who’ve known of Banks only through the media are fully justified in wondering if anyone could be as consistently sunny as Banks presented himself to be. Those closer to him suspected he was not, and that the sunshine could be a cover for a more complicated picture.

In Let’s Play Two, Ron Rapoport, a former columnist for the Chicago Sun–Times and author of numerous sports books, who enjoyed a good deal of face-time with Banks and who interviewed countless of his family members, teammates, and other associates for this book, gives us a complete picture of an athlete and man who is so often treated in a cliché way. And I like the way he does it. He gives us important details about Banks and his life without attempting to put him, posthumously, on the psychiatrist’s couch. He has uncovered a lot of detail in his very through research, but he leaves the conclusions to readers. Mine is that Banks was a complicated person and a bit of a mystery, like almost all of us are.

I’ll leave most of the non-sports-page details to those who choose to read the book. But some of the facts that strongly suggest that Ernie Banks was more than just sunshine and champagne bubbles include that he was married four times, had a distant relation with his children and his parents, and while he had many acquaintances and loved to mix with fans, he had few close friends. After his long baseball career was over, he never really settled on what to do with his time, or figured out how to relate to the people in his life.

Along the way of giving us a more complete picture of Mr. Cub, Rapoport gives us an economical but revealing history of the Cubs, including profiles of the players whose arrival in the mid-sixties helped to finally make a contender out of the Cubs. These include Billy Williams, Ron Santo, Don Kessinger, and Ferguson Jenkins. We even get a look-in (as MLB-Network has taught us to say) at Cub’s eccentric owner Philip K. Wrigley, who was more than just chewing gum and ticket sales. There’s a heart-breaking chapter on the 1969 Cubs, who led the National League for most of the season, only to lose in the end to the “Miracle Mets.”

Baseball fans of sufficient vintage to remember Ike at 1600 will enjoy this walk down Memory Lane. Younger fans might appreciate learning more about a storied franchise as it endured some years that were forgettable, except for that very bright centerpiece named Ernie Banks. A great ballplayer and a complicated man.