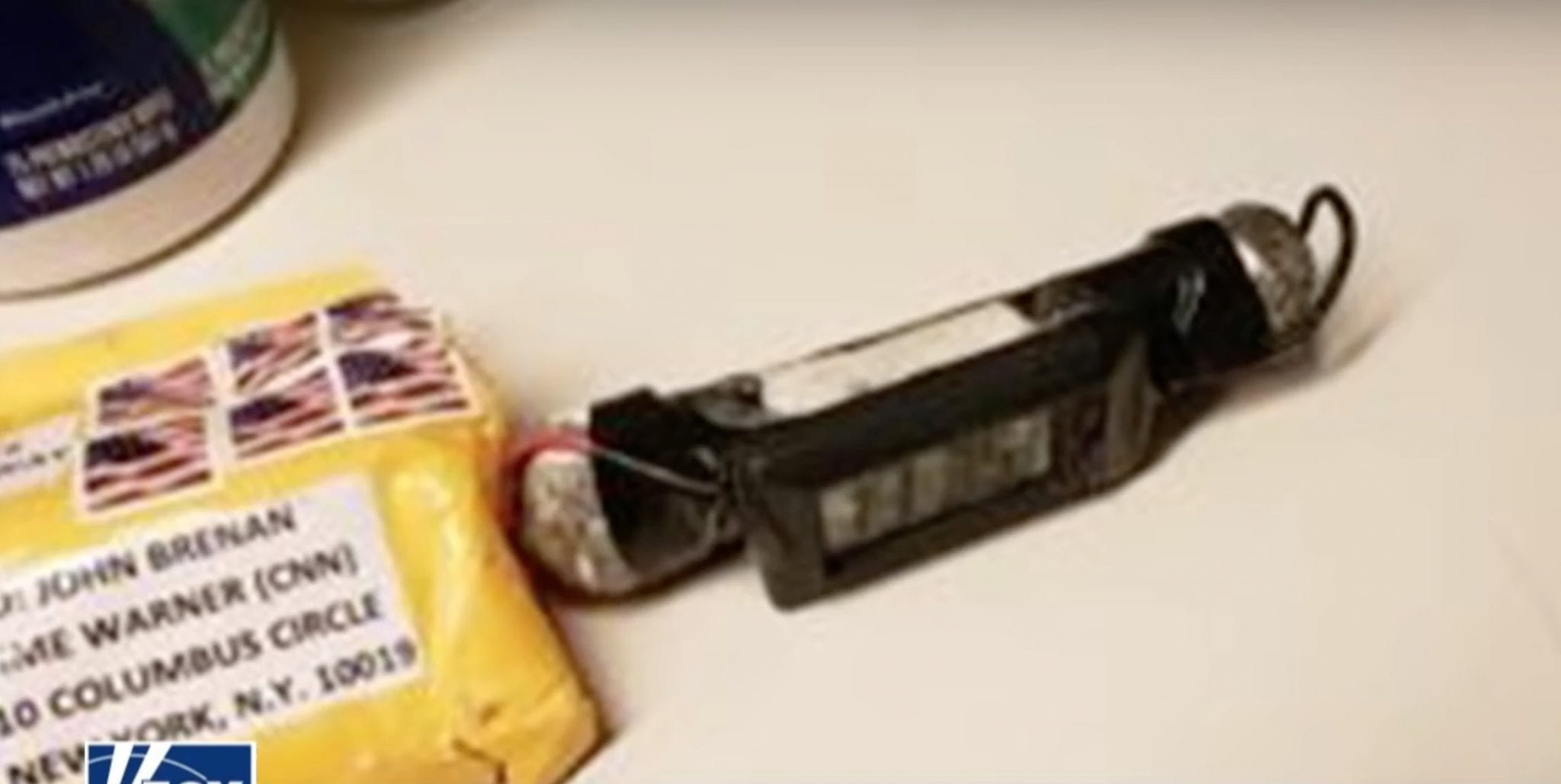 For a while it appeared as though the GOP was shedding, at long last, its image as The Stupid Party — and along with doing so, positioning itself to take supreme advantage of the Democrats’ ideological and behavioral implosion for the foreseeable future, perhaps even as soon as the midterm elections in two weeks.

And then came Wednesday and Thursday, in which the lead news story was some 10 or so suspicious mail packages addressed to a number of political and cultural luminaries of the Left, none of which detonated like they were presumably supposed to and none of which displayed much craftsmanship as tools of political murder.

What those suspicious devices do appear to be is tools of political propaganda… for the Democrats. After weeks of intemperate and ill-advised statements aimed at riling up their base, whether it was the rah-rah idiocy of Maxine Waters, Mazie Hirono, and Corey Booker casting mob violence as “activism” or the exhortation by Hillary Clinton of her supporters to be “uncivil,” or Eric Holder telling Democrats to “kick” their political opponents, the Democrats had successfully cast themselves as the party of The Mob — and in so doing had turned off a great number of persuadable voters while at the same time insuring Republicans were every bit as motivated to vote as the Dems, if not more so.

But if some wayward-thinking conservative was behind those half-assed pipe bombs in the mail, he’s the least-effective political terrorist in the 21st century. No sooner did his handiwork cross the transom but every Republican politician in sight rushed to the microphones to decry the poor quality of our current political tone.

This just before a midterm election when in House district after Senate seat the Democrats are running bona fide lunatics bent on bringing down our system of limited government and free enterprise and replacing it with the worst excesses from our college campuses.

Sorry, but this is entirely the wrong message. We don’t need the tone police. What we need is the investigation that the FBI and other law enforcement agencies are conducting at present, and it will be over quickly. Thursday afternoon the word got out that the devices appear to have entered the mail stream from a postal center in Opa Locka, Florida, which is in Dade County a little north of Miami; it won’t be long before the would-be bomber is found and identified.

And despite the quick capitulation to the media’s Violent Right Wing Nut narrative which sprung up in haste as soon as those packages were reported to law enforcement, nobody ought to be surprised if the “bomber” turns out to be a too-smart-by-half Democrat aiming to pull off a false flag stunt. After all, there have been more hoaxes than we can count perpetrated on the American people by loons on the left — from nooses and racist graffiti to fish stories of anti-Muslim violence — in recent days, while real political violence has been growing out of its fringes into the mainstream.

On September 9, Rudy Peters, the Republican running for Congress in the 15th District in California, was attacked by a knife-wielding man shouting, “F___ Trump”.

The attacker, Farzad Fazeli, an Iranian Clinton supporter, had previously posted, “Don Trump won’t clean his own house, so he’s too dirty to know right from wrong. Impeach/incarcerate him before more children die. P.S. complacency is worse than being the shooter.”

Next month, Shane Mekeland, a Republican running for the Minnesota House of Representatives, suffered a concussion after being punched in the face at a restaurant. “You f____g people don’t give a s___ about the middle class,” his assailant had shouted at him.

Mekeland is back on the campaign trail, while still recovering from the assault. “The media and the likes of Maxine Waters, Hillary, and Eric Holder as of late is driving this behavior,” he warned.

That same month, also in Minnesota, State Rep. Sarah Anderson, a Republican, was punched by a man when she tried to stop him from vandalizing her campaign signs.

Also in October, Kristin Davison, the campaign chief for Adam Laxalt, the Republican candidate for governor in Nevada, was left with pain and bruises after a confrontation with a Democrat operative. Her alleged assailant faces a charge of misdemeanor battery.

So there is no reason for anyone in the GOP to back down from their position based on the events of the past two days. If the bomber happens to be a registered Republican nobody on our side needs to defend him; he’s a dunce and his actions can’t be found in any conservative political playbook.

But if this turns out to be a false flag, and frankly it would make a lot more sense if it was a false flag — if you’re a conservative you want Maxine Waters and Hillary Clinton to live FOREVER for all the damage their moronic statements do to their cause — then this apologizing for the tone of election-season rhetoric will come off as pure weakness.

We’re in a war for the soul of a great nation. Now is no time to back down. Decry political violence and demand the war be fought with ideas and communication, and not bombs or mobs.

This isn’t that difficult.

I may have more on this subject after the election, when the results are fully known, but my contacts in Texas tell me they’re sensing a major correction going on in the Texas Senate race, in which the once-surging Beto O’Rourke is now fading badly as Ted Cruz drives to re-election.

The spectacular campaign rally at the Toyota Center in Houston, where there were nearly 100,000 RSVPs sent in for a venue which seats only 18,000 to attend Cruz’s rally with President Trump, was merely a symptom of what’s happening. Polling over the past two weeks puts Cruz anywhere from 7 to 10 points ahead of O’Rourke; the latest survey, this one by Ipsos, gives Cruz a 5-point lead (49-44). Even that poll is good news for Cruz — Ipsos’s last poll only had him ahead by two.

O’Rourke has raised a staggering $60 million — a war chest he can’t possibly spend even in a Texas Senate race. That much of a haul rightly has other Democrats on the ballot in the Lone Star State singing the blues. For example, Gov. Greg Abbott has a 90-to-1 cash on hand advantage over the Democratic nominee Lupe Valdez, and the Democrats’ House candidates are mostly short-stacked against their Republican opponents. Those other candidates have been begging O’Rourke for help and not getting it.

For his part O’Rourke — and the political consultants dipping deep into that money pile for fat retainers as part of his team — have assured the down-ballot candidates that Beto’s rise will lift all of them.

That’s fine as far as it goes, but if O’Rourke continues to fade and ends up drawing the same 43 percent Hillary Clinton pulled in Texas in 2016, the Dems aren’t going to pick up House seats from Pete Sessions, Jon Culbertson, and Will Hurd like they’ve been telling everybody they would — and their prospects in the legislative races will be similarly dim. Hurd, who was supposed to be one of the most vulnerable Republicans in the entire country, is now leading by 15 points in the latest poll, and it’s a good bet Sessions and Culbertson will be fine as well.

After all, the infrequent voters O’Rourke has been targeting will only stay engaged so long as they think he can win. If the word gets out that he’s a lost cause, they’re going to stay home as they usually do and there goes Democrat turnout down the ballot.

When it’s over, don’t be surprised if the recriminations against O’Rourke are quite loud. Texas Democrats act like it’s only a matter of time before they turn the state blue, but if O’Rourke’s campaign turns out to be a large-scale con job of Democrat donors that timetable might have to be set back quite a while.