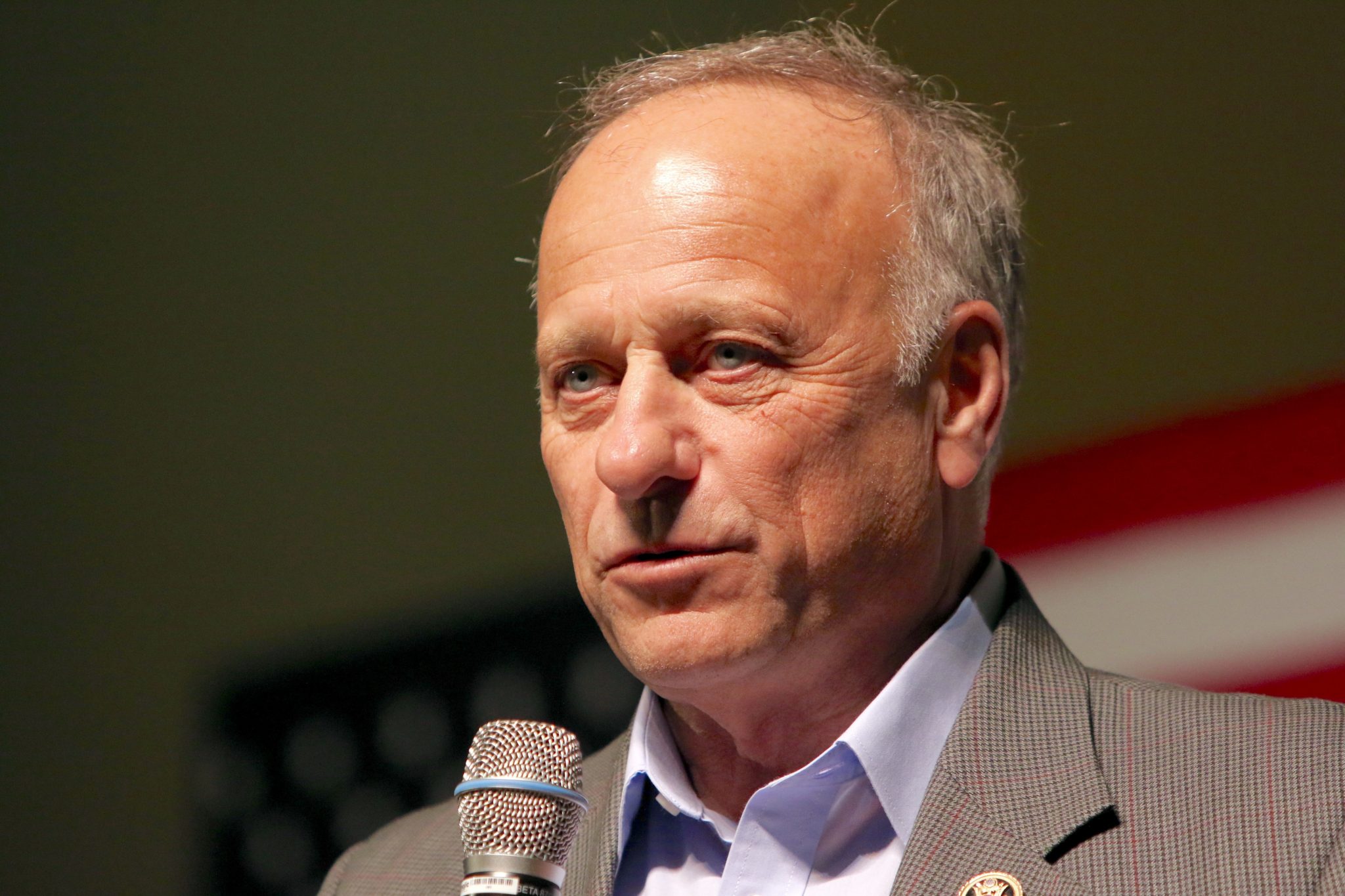 No one watching the presidential debate Tuesday night understood the trap “moderator” Chris Wallace set for President Trump better than Iowa Rep. Steve King. As a result of that trap, King is now serving his final days as a congressman.

The mechanics of the trap were painfully obvious. As his opening  gambit, Wallace asked Trump a question fully irrelevant to the state of the nation: “Are you willing tonight to condemn white supremacists and militia groups?”

“Sure,” replied Trump. The questioning should have ended there, but when Wallace persisted, Trump made the appropriate rejoinder, “Sure, I’m prepared to do it, but I would say almost everything I see is from the left wing, not from the right wing. I’m willing to do anything, I want to see peace.”

Instead of exploring the incessant left-wing violence that has crippled any number of cities, Wallace and Biden tag-teamed Trump into an ambiguous declaration about the Proud Boys, a curiously interracial, right-wing group 90 percent of the audience had previously not heard of, including possibly the president.

Trump said, “Proud Boys, stand back and stand by. But I’ll tell you what, somebody’s got to do something about Antifa and the Left.” As Christopher Caldwell observes in his book The Age of Entitlement, all it takes to be a racial pariah today is “some imperfectly calibrated phrase,” and perfect calibration has never been Trump’s strong suit.

Having long since sacrificed their integrity, the major media made the predictable follow-up move. “Trump Refuses to Denounce White Supremacy in Chaotic Debate,” trumpeted the headline of the impressively shameless New York Times.

The first two moves would have been in vain had not the more spineless Republicans walked proudly into the trap. Politico summed up their fecklessness in its headline, “Republicans to Trump: Condemn white supremacy now.” Check! Mate … well, almost. This king, unlike other Republican pretenders to the throne, has consistently refused to roll over and play dead.

Steve King has seen it all before, up close and personal, which is why he will no longer be a congressman after January 2021. An outspoken Christian constitutionalist and a staunch defender of Western civilization, King has been ruffling establishment feathers since first elected to House in 2002. The frontal assaults from the media he had grown used to. The stabs in the back took him by surprise.

The boldest of the back-stabbers was Rep. Steve Stivers of Ohio. In November 2016, Stivers was elected chair of the National Republican Congressional Committee (NRCC). “I am going to work to defy history and gain seats because we’re going to get things done and pass policies the American people support,” said Stivers upon being elected.

Stivers had a unique way of gaining seats. On October 30, 2018, a week before the November election, Stivers played into the Democrats’ hands, tweeting, “Congressman Steve King’s recent comments, actions, and retweets are completely inappropriate. We must stand up against white supremacy and hate in all forms, and I strongly condemn this behavior.” King, an ardent supporter of Israel, had earned the “white supremacy” tag by criticizing George Soros, an ethnic Jew whom Israeli Prime Minister Benjamin Netanyahu has also frequently criticized.

Soros enjoys an immunity from criticism that conservative Jews do not. In July 2018, Stivers had publicly called on New Jersey congressional candidate Seth Grossman to “reconsider his candidacy” after the left-wing smear machine Media Matters discovered an arguably racist article Grossman had carelessly posted on Facebook four years prior.

The defiant Grossman said the NRCC “should stop giving ammo to the radical left to use against Republican candidates.” Stivers wasn’t listening. Without NRCC support Grossman lost a traditionally Republican seat. King barely hung on to his, and the Republicans lost the House. Given his dismal performance, Stivers wisely chose not to run for a second term as NRCC chair.

In January 2019, King made what he admits was a “rookie mistake.” He agreed to an interview with the New York Times, presumably about his role in helping Trump set his immigration policy. In King’s defense, he was not privy to the ongoing shift in strategy at the Times.

In August of that year, with the Russia collusion story falling apart, Times editor Dean Baquet made the paper’s strategy shift altogether clear. The new focus, said Baquet at a large internal meeting, a tape of which was leaked, “requires imaginative use of all our muscles to write about race and class in a deeper way than we have in years.” He specifically planned to target “people who peddle hatred.”

Apparently, the people peddling “hatred” included at least one Times staffer. In her open resignation letter a year later, Times op-ed editor Bari Weiss described the newsroom zeitgeist as the “new McCarthyism.” Weiss, who is herself Jewish, had been called “a Nazi and a racist” by her colleagues and smeared as “a liar and a bigot,” all for straying from the “new orthodoxy.”

Former “Sunday Styles” editor Trip Gabriel was not one to stray. Gabriel killed King’s career with a one-sentence quote that was recorded by neither party during their phone interview. Gabriel reported King’s imperfectly calibrated phrase as follows: “ ‘White nationalist, white supremacist, Western civilization — how did that language become offensive?’ Mr. King said.”

As Wallace did with Trump, Gabriel fed King the lethal words. As King told House Leader Kevin McCarthy, he was defending only Western civilization. If he used the words “white nationalist” and “white supremacist,” he was only repeating back what Gabriel said to him and questioning how those terms entered the lexicon. King did not as a matter of course use those words.

In fact, as the Times’s own word usage frequency chart from 1970–2018 shows, the phrases “white nationalism” and “white supremacy” had scarcely been used before the last few years when their usage zoomed. Also exploding in the last few years were the words “racist,” “whiteness,” “anti-Semitic,” and “kkk.”

As should have been obvious even to the squishiest Republican, the Democrats and the media are the ones loading this toxic language into everyday political discourse. In that “racist” had lost its punch from overuse, they have been upping the charges while simultaneously defining the offense down.

On the House floor, the day after Gabriel’s article, King perfectly calibrated his position on white nationalism and white supremacy: “I reject those labels and the evil ideology that they define. Further, I condemn anyone that supports this evil and bigoted ideology which saw in its ultimate expression the systematic murder of 6 million innocent Jewish lives.”

It was too late. The usual suspects had already crowded the mics in their rush to denounce King. Feeling the heat, McCarthy stripped King of his committee assignments, including that of agriculture, the kiss of death in a farm state like Iowa. In June, Randy Feenstra, an ambitious mediocrity, beat King in the Republican primary, and King’s political career was effectively over.

In one of my rare prescient moments, a week before Trump announced for president in June 2015, I began a column with this sentence: “The Republican nominee for president will be that candidate who best learns that there is no future in apologizing.” Trump has survived by not playing the Left’s game. I would have hoped that, by now, more Republicans would have caught on. Unfortunately, most have not.